Organizers were looking for something a bit special for the musical finale of the closing ceremonies of the XIII Pan Am Games.

With a personalized letter of invitation from premier Gary Filmon and a combined performance fee rumored to be more than $200,000 plus expenses, they approached the original four members of The Guess Who, (Randy Bachman, Burton Cummings, Jim Kale, Gary Peterson), to pitch a reunion performance. 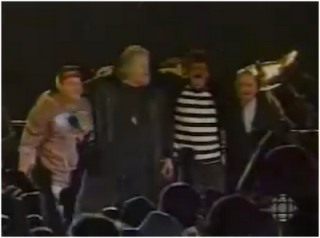 The Guess Who began breaking up in 1970 when Bachman left. Cummings left in 1975. Over the decades the four quarreled over royalties and the use of the band's name. They did reunite briefly in 1983 and 1985 but the last time they played together before this was at the 1987 Juno Awards when they were inducted into the Juno Hall of Fame.

One by one the members signed on. At the time Cummings told CBC Radio:


“You know, it’s nice to get paid but that’s not why we’re here. Good Lord, this is Winnipeg , man. You know, this is The Guess Who playing in Winnipeg Again. The original four guys.” (Source)

On a rainy August 8, 1999 at 9:45 p.m. the group took the stage to play their four song set: No Time; These Eyes; Undun and American Woman. After No Time, Cummings said:

Where can I get a video of the closing ceremonies? I performed that night

I'm not sure. Even for the opening ceremonies there are just a couple of really bad quality videos on YouTube. CBC would have it in their archives, though the Games organization might have the rights to rebroadcast or redistribute.

Too bad because both ceremonies were probably the largest-ever performances to take place in Winnipeg.