End of the line for Monte Cassino, Milner House ?

The Heritage Winnipeg blog points out two buildings that are likely being readied for demolition. 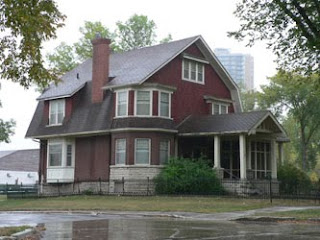 Great West Life has has applied to have Milner House delisted. It stands on Balmoral at Mostyn Place, the south west corner of the Great West Life parking lot. (see the HW post for more information about the house and its situation). Back in February I featured the Monte Cassino block in my post "For Sale / Sold - February 2011" Though it is still listed for sale through Shindico, the owner wants to demolish and needs to overturn a city recommendation from June to give the building heritage designation. UPDATE: the proposal was withdrawn September 2011 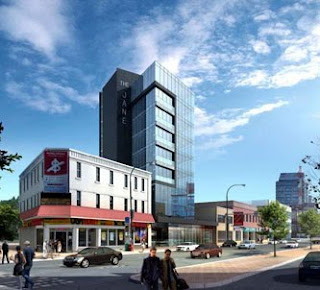 In its place, the owners are proposing this 9 storey, 32 unit mixed-use residential block. The city is recommending that the heritage status not be granted so that the proposed project can go ahead.

In my February post I did a brief history of the Monte Cassino. Here it is again, with a couple of additions:

I've never been inside but the outside has always intrigued me. Great floor to ceiling widows on the main floor, fancy brickwork with great stone accents and even stained glass accents on the upper floors.
The 'Monte Cassino Court' was built in 1907 for Benedicto Persichini, a Main Street grocer, who moved in with his business and his family (wife and at least one son, John). They continued to own and live at Monte Cassino until the mid 1940s.

The building was built in two phases, the main floor in 1907 with the top floors were added in 1910.

The Voice, 1908
One of the first large retail tenants was the City Tea and Coffee Company, a retailer and wholesaler. They stayed until 1911 when the space became a cafe, first the Rome Cafe then MC Cafe. From then, it housed a photo finishing store (in 1921), Singer Sewing Machines (in 1924), Neal's Grocery Store (in 1926), and an Elgin Motor Car Co. showroom.

In 1931 it found its first long term tenant. Chesterfield House, an upholstery shop, opened in 1931 and stayed until 1966. 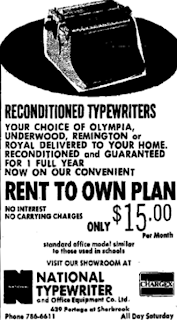 January 18, 1974. Winnipeg Free Press.
In 1967 National Typewriter moved in. Over time the business took over the entire building, including the residential suites, for their operations.

The company's name changed to reflect the times - to National Office Equipment then Nat Com. They went out of business in 1991 and the building has sat empty since 1992.

I was saddened to see a wind storm this spring tore one of the stained glass windows out of the Monte Cassino. It lay smashed on the sidewalk below as I walked downtown early one morning.

I didn't realize it had lost some of its windows. I haven't looked closely at it for a while. I see a clinic has opened on the main floor but they didn't do much to renovated the building. sadly, bits will keep falling off.

I didn't realize it had lost some of its windows. I haven't looked closely at it for a while. I see a clinic has opened on the main floor but they didn't do much to renovated the building. sadly, bits will keep falling off.