Over the summer I found myself thinking about Winnipeg's lack of observation decks. A lot of cities have a place or two that you can go up to for a bird's eye view of your surroundings. In Winnipeg, we don't have anything like that anymore. I was entertaining a relative from Ireland. From past visits I know that showing people the city from above gives them an idea of how flat and expansive the prairies are, the wonders of Big Sky on a summer's evening and Winnipeg's incredible urban greenery. (The latter was something my recent visitor noted over and over again during her stay - "it's like you live in a forest !") View from fifth floor rooftop, Ellice and Balmoral (looking toward the airport)

Watching coverage of the CN Tower Edgewalk, which has become the darling of Toronto niche tourism, got me thinking that even a basic resuscitation of something like the former Royal Crown restaurant would be an attraction. Even if you left the revolver off and served basic food, or charged a loonie admission and had a concession and just let people wander around, it would be a better alternative to having it sit empty and forgotten. View from the Forks' tower balcony

For the foreseeable future, if you want to get a great bird's eye view of the city, better book an an appointment with a lawyer from Aikins ! (Let me know if I am missing any good spots).

Here's a look back at our observation deck past: 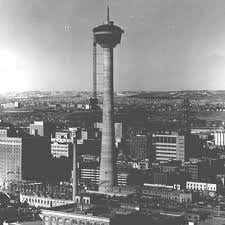 In the late 1960s a building boom coupled with the easing of restrictions on the heights of apartment buildings was transforming the downtown skyline. By 1969 numerous buildings in the 18 storey-plus range were under construction or in their final planning stages, including: the Richardson Building; Winnipeg Inn (now The Fairmont); North Star Hotel (now the Radisson); Place Louis Riel; 55 Nassau; Newport Centre; Holiday Towers; Holiday Inn; Chateau 100 and the House of York (now Residences on York).

That year a development consortium, who spoke to newspapers under the condition of anonymity, approached the city and province with the idea for the tallest tower in North America. Modeled on the Husky Tower in Calgary, (called the Calgary Tower since 1971), that opened in 1968, it would have a revolving observation deck and restaurant. At 630 feet it would stand six feet taller than the Calgary Tower and 200 feet taller than the almost completed Richardson building.

It was floated as a Manitoba Centennial project, the proponents hoped that it would go in the Centennial redevelopment area around Main and Rupert where the Centennial Concert Hall was. The project made it to the feasibility study level and then faded from the media. 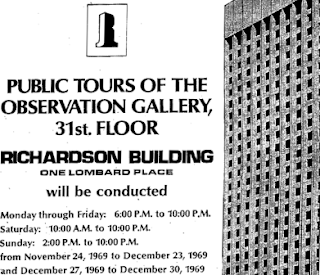 The Observation Gallery wrapped around the 31st floor of the newly opened Richardson Building giving never before seen views of Winnipeg. To celebrate the building's grand opening you could apply for free tour tickets for November and December 1969. Over 6,000 tickets were snapped up. Beginning January 17, 1970 the building began charging an admission of 50 cents for adults and 25 cents for children. That covered the cost of staff who operated the area from 6 pm - 9 pm on weekdays and 2 pm to 5 pm on Saturdays.

By the late 1980s the gallery was pretty much forgotten. In a 1989 story, a Free Press reporter contacted the Richardson Building to see if the deck was still open and, two her surprise, you were still able to book a tour. It appears to have closed later that year, though. The space now, I believe, are offices and a gym area for employees of the building. Fast forward to 1988 and we had another great observation spot in the Royal Crown Restaurant. The two level revolving 'crown' had a lounge at the 31st floor with a restaurant on the level below. The 'crown' did a complete 360 degree rotation every 70 minutes. On December 31, 2008 the Royal Crown closed, the owner citing declining sales and a lack of parking. A spokesman told the media that the rent was in the range of $25,000 a year.

Soon after closing there was an ongoing story that he Hotel Fort Garry was looking at using the space but that never materialized. The 'Crown' remains closed.

Related:
A history of the Calgary Tower
13 scary observation decks

I think the glass elevator at the Fort Garry Hotel gives a decent view.

When I was a kid we went on a school field trip to The Richardson Bldg.
We got to go up to the top floor that has a gym for employees & a running track that goes around the entire perimeter of the building, with big picture windows, & a kick-ass view of the city!
Somebody should look into that.

When I was a kid I rued the fact that Winnipeg didn't have a decent observation tower!

I didn't discover the lounge at Fort Garry Place until I was in my university years and I always made a point of dropping by for a drink and the view once every year or so. Hopefully that facility will get up and running again...

@Ed... I think you mean the glass elevator in Fort Garry Place, which goes up the to revolving restaurant. That elevator hasn't worked since they closed the restaurant. :(

very coolblog, i suggest as part of parcel four at forks to make a huge tower that complements the museum

It's been 7 years since this was written and Winnipeg to the best of my knowledge is still without a decent observation deck. Although I've been told the one at the Human Rights museum is not bad

If you want to spend a few bucks and not drive home from a Jets game hammered, there are condos at the Glasshouse available on AirBnB ... the view from their rooftop deck to the west is pretty good.