The second season of the Classic Film Series begins this week at Silver City Polo Park with Citizen Kane on September 7th and 25th. Admission is just Just $5 ! 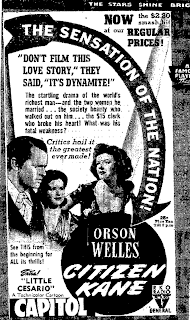 Citizen Kane premiered in Winnipeg on October 2, 1941 at the Capitol Theatre on Portage Avenue, (it wasn't until the early 70's that the Capitol was renovated to have its entrance off Donald). The film premiered in Hollywood back in April so by the time it got here Welles was already considered the new master of Hollywood cinema.

George Freeman, writing in the Manitoban on October 10, 1941, acknowledged that it was already a "... landmark in cinematic history." He praised the film for its “superior” acting compared to the usual Hollywood fare and Welles for his “technical excellence” in the innovative use of camera angles and shadows. Still, he “…cannot feel a little dissatisfied with the picture as it leaves some doubts in our minds as to just what were Kane’s motives and the explanation of his spiritual adventures." (Read his full review here).

Also: For those of you who prefer to watch videos online, keep an eye on the National Film Board site. They are constantly adding new content, from animated shorts to full length feature films. On a local note, Selkirk of Red River was added last month.

Here's their recommendation of 12 sites where you can catch free movies !

Um, could you fix the massive typo in the headline of this post?

Woops, yes, it is fixed. I think spellcheck did that !