Winnipeg was pumped for its first ever Grey Cup game on November 24, 1991. A week of parties and festivals climaxed with 75,000 fans jamming Portage Avenue to see the Grey Cup Parade that Saturday.

The story off the field was a temperature that only a true Winnipegger could love. The daytime low, just a few hours before game time, was -30. By the 1 p.m. kickoff time it had warmed up to a balmy -16.5 with a -24 wind chill.

On the field, 51,985 fans saw the Toronto Argonauts defeat the Calgary Stampeders 36 to 21. The man of the game was "Rocket" Ismael, the game's MVP. (For a recap of the game) 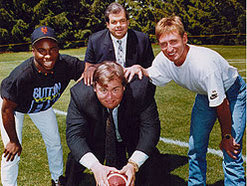 It was an incredible year for the Argos. Earlier they were purchased by an all-star ownership group that included Bruce McNall, Wayne Gretzky and John Candy. McNall scored an early coup by wrestling Raghib "Rocket" Ismael from the NFL with a CFL-record $24m, four year deal. (Also see The Art of The Rocket Deal.) 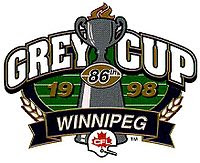 Calgary's Mark McLoughlin made up for a missed field goal earlier in the game by kicking a 35 yarder with no time left on the clock to beat Hamilton 26 - 24. 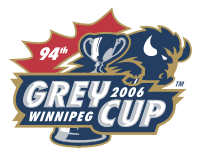 Weather wasn't an issue at all for the 44,786 fans who packed CanadInns Stadium. Game temperature hovered around zero with no windchill !
The B.C. Lions defeated the Montreal Alouettes 25-14. A big story of the game was Paul McCallum who tied a CFL record for the most field goals in a Grey Cup game with six. Also, a young Buck Pierce made an appearance in relief of Dickinson.

For a great gallery of the 2006 festival and game see Manitoba Photos' gallery.

Next: Some memorable Bomber Grey Cup moments at other stadiums ....