Source
It was a best of times / worst of times season that saw the Bombers begin with a 7 - 1 record only to falter in the middle and end the season 10–8. It was enough to finish atop the East(ern) Division*, though. (* Oddly, the CFL uses both "East Division" and "Eastern Division" interchangeably throughout their website.)

The final game at CanadInns Stadium was the CFL East(ern) Division final on November 20, 2011 that saw the Bombers beat Hamilton 19 - 3 in front of 30,051 and earn a berth in the 99th Grey Cup game in Vancouver. (Read the game summary here.) 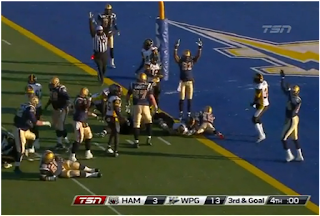 Touchdown with 00 on the clock (Source)
The story of the game was New York-born Chris Garrett. The Bomber running back had 29 carries for 190 yards. He closed out the Stadium's 58 year history in unbelievable fashion: with a touchdown in the final second of play !

UPDATE: It turns out that this wasn't the final second after all. A series of construction delays on the new stadium means that Winnipeg Stadium will be pressed into service for the 2012 CFL season !

What a great way to close out the old ballyard - a TD with zeros on the clock. Now to seal the deal in BC!