Earlier was part 7 of my Great Winnipeg Stadium Moments series: Grey Cups (1991, 1998 and 2006). Now, a bonus post of interesting Winnipeg Grey Cup moments from assorted stadiums from the past 99 years !

December 5, 1925 - In Winnipeg's first appearance at the big game, the Ottawa Senators beat the Tammany Tigers 24 – 1 on home turf to win the 13th Grey Cup.
Winnipeg's Tammany Tigers Athletic Association, (which also fielded baseball and hockey teams), were western rugby champions but no match for their eastern counterparts. This was nothing new. The cumulative score of the 1922 - 1925 Grey Cup games was east 114, west 2. December 7, 1935 - The 'Winnipegs' defeat the Hamilton Tigers 18-12 to become the first Western Canadian team to win the championship! It was Grey Cup number 23.

The late, great Fritz Hanson scored a 78 yard touchdown seal the game. He led the Blue to two more Cups.

December 10, 1937 - The Bombers and Toronto Argonauts play for the 25th Grey Cup in a violent wind storm in Toronto. The result was a paltry seven total points, a record low for a Grey Cup game. Sadly, Toronto scored four of them.

It is, however, the first game recorded by the CBC. Check out the play by play ! December 9, 1939 - The Bombers beat the Ottawa Roughriders at Lansdowne Park for the 27th Grey Cup.

CBC Archives has a radio clip of the game and post-game interviews. The team is also in the Manitoba Sports Hall of Fame.

November 29, 1941 - Threlfall's Blue Bombers beat the Ottawa Rough Riders to win the 29th Grey Cup. The team is in the Manitoba Sports Hall of Fame.

At the final whistle, over 700 Manitoba troops invited to watch the game stormed Varsity Stadium's field and stole both goal posts. They surfaced the following day outside the Bombers' downtown Toronto hotel.
December 5, 1942, Wpg Tribune 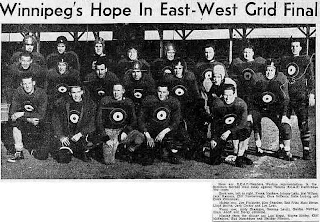 November 25, 1950 - The Argos record the sixth and last shutout in Grey Cup history. Unfortunately, it was a 13-0 defeat of the Bombers in the so-called mud bowl, the 38th Grey Cup. Also see CBC TV archives footage ! 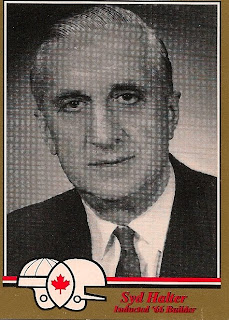 On January 22, 1956 in the Royal Alexandra Hotel at Higgins and Main the Canadian Football League was created ! Winnipeg sports administrator Syd Halter is named its first commissioner. 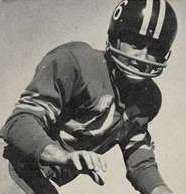 November 29, 1958 - According to Vince Leah, the 46th Grey Cup final was the most thrilling the Bombers have ever played. They found themselves down 14 - 0 before Bud Grant's boys began clawing their way back. The Bombers won the game 35 - 28 and ended an 18 year Grey Cup drought.

Bomber QB Jim Van Pelt set a Grey Cup record with 22 points. The team is in the Manitoba Sports Hall of Fame. 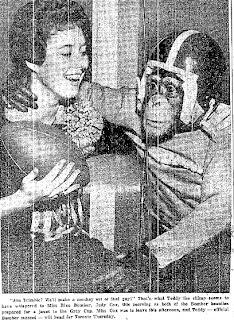 This was the first Grey Cup game for Bomber Mascot Teddy the Chimp who made the trip to Toronto with the rest of the team. They won it twice more with Teddy as a member of the team.

December 2, 1961 - The 49th Grey Cup game is the first and only one that required overtime. The Bombers' Ken Ploen scored the winning touchdown in the 73rd minute to beat the Hamilton Tiger Cats 21 - 14.

The team is in the Manitoba Sports Hall of Fame. 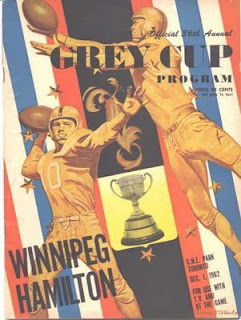 December 1 - 2 , 1962 - The 50th Grey Cup was a two-day affair thanks to a zero visibility fog that enveloped Toronto's Exhibition Stadium.

The Bombers were leading Hamilton 28 to 27 on the strength of Leo Lewis who ran for two touchdowns and threw for a third when the game was suspended with 9:31 left in the fourth quarter. When it resumed the next day, no further points were scored.

Winnipeg's defense smothered Hamilton who set a Grey Cup record for the fewest rushing yards in a final: 24.