On August 14, 2011 the Winnipeg Stadium, (now Canad-Inns Stadium), turned 58. Barring a major construction setback, this will be the final season for the building. In this series I look back at the history of the Stadium and some of the great moments, football and non-football related, that took place there over the decades !

On August 29, 1970 "Man-Pop", one of Winnipeg's first outdoor rock festival, took place at the Winnipeg Stadium. As pointed out in the comments below, Festival Express, what was supposed to be a five city summer festival tour rolled through town for a July 1, 1970 show, (also see).

ManPop was a home-grown concert, part of the youth festivities for the Manitoba Centennial celebrations. Concerts had been held across province all summer long and Man-Pop was the grand finale. The Centennial Corporation budgeted $230,000 for the event, expecting to make back $100,000 of that through ticket sales. 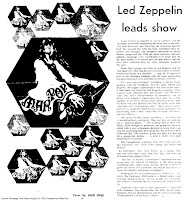 In July 1970 the lineup was announced. The show would be held at the Winnipeg Stadium, headlined by Led Zeppelin, who ate up $50,000 of the budget. It also included an impressive mix of local, national and international acts: Iron Butterfly; The Youngbloods; Chilliwack; The Ides Of March; Dianne Heatherington and the Merry-Go-Round; The Mongrels; Next; Justin Tyme; Chopping Block; Sugar & Spice; Hay Market Riot (the local group, not the American version) and Euphoria.

The Centennial Corporation extensively promoted the show in advance, perhaps worried about the dismal ticket sales of the earlier Festival Express, which sold about 4,500 of 35,000 tickets. The expenditure of taxpayer dollars on a rock festival drew the ire of some, though the corporation pointed out that their year-long lineup of programming included not just ManPop, but entertainment form "Mom and Pop", too.

Fifteen thousand people showed up at noon for the start of the eleven-hour concert, but later in the afternoon disaster struck in the form of a heavy downpour that lasted for over an hour. The field became a muddy pit, the concert's power source was damaged and a number of bands, including Zepplein, has some or all of their equipment destroyed.

Knowing that the festival was a "one-off" and could never be re-booked, Maitland Steinkpopf, chairman of the Centennial Corporation, and his team had an idea: Instead of calling off the concert, move it to the neighbouring Winnipeg Arena.

Organizers scrambled to find replacement equipment for the bands and chairs for the arena floor. Dozens of Winnipeg Transit buses were booked to run concert-goers home in the wee hours of Sunday morning.

Concert-goers were sent to the Arena but not everyone got a seat as the fire department locked the doors when the capacity reached 14,000 and threatened to cancel the show if any more people were allowed in. Some angry fans broke three of the Arena's windows, but there was little other violence. The Centennial Corporation offered refunds for the couple of thousand people left in the rain.

In what was an organizational triumph, just three hours after the stadium concert ended,  the arena concert began.

Some bands took it in stride, making do with borrowed equipment and putting on a great show. The headliners, however, were ot as enthusiastic. Mention was made in the media that performer Diane Heatherington had to coax Led Zeppelin to stick around and play their set. If you check out my comments below, an anon who says they worked backstage claims that it went further than that - she had to threaten to publicly shame them on stage into performing.

It worked, and Led Zeppelin, with some equipment borrowed form The Guess Who, took to the stage around 2 a.m. and the concert got out shortly after 3 a.m. Sunday morning. 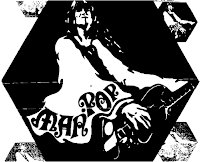 By most accounts the concert was a success, despite the change in venue and the heat and humidity inside the arena. Most concert goers and bands  realized that it was a case of make the best of the situation or miss out.

In the days after the concert, Led Zeppelin's Robert Plante said that he was unhappy with the makeshift concert:


"Our music demands a great deal of equipment for one thing and the building we were in wasn't too hot on the old acoustics was it?"
September 5, 1970. Winnipeg Free Press

"It was just an unfortunate set of circumstances, we don't blame anybody for it, I think you lot did a pretty good job, what with all the groups pitching in with their equipment and your local sound people, with such short notice. I feel sorry for the cats that lost all their sound system out there in the rain. Their insurance company is going to have a fit when they find out what happened!"
September 5, 1970. Winnipeg Free Press 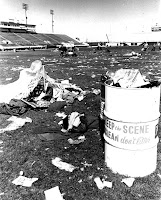 Police noted that the atmosphere was generally friendly with just 21 arrests, mostly for drug violations amongst minors.The only damage reported were those three Arena windows and the muddy, littered mess at the hastily vacated Winnipeg Stadium, which did get cleaned up in time for a Bomber game the following week.

The expensive headliner Led Zeppelin wasn't the crowd favourite, though.

The show-stealers were six-piece Chicago band Ides of March, riding high on their album Vehicle. They returned later that year to play a sold out show at the U of M gym and two shows at the Concert Hall the following summer.

1970: $5.50 (unless you're slow and have to cough up a whole extra dollar) for a full day of music, including Led freakin' Zeppelin.

I think I was born in the wrong decade.

No doubt ! Originally they wanted to make it free but realized that might cause crowd control issues so settled on the modest ticket price !

It wasn't Winnipeg's "first" outdoor rock festival. Earlier in the summer - July - Festival Express rolled through and played the stadium in blistering heat. The lineup? How about:
Mountain
Delaney and Bonnie
Buddy Guy
Flying Burritos
Grateful Dead
The Band
Joplin

" It is said that performer Diane Heatherington had to coax Led Zeppelin to stick around and play their set."

That is the understatement of the year.

I was backstage as part of the hastily assembled crew and Zepplin and their manager were acting like complete drunken A-holes refusing to leave the dressing room due to their contract stipulation that they were to be off stage by 11 PM. If Dianne hadn't threatened to tell everyone in the arena that they were refusing to go on, but they were staying at the Winnipeg Inn if anyone wanted to talk to them about it, they would have left everyone high and dry. They went on and did a crappy, drunken 1 hour set. Ides of March blew them off stage with their professionalism and enthusiasm. Zepplin were nothing more than a bunch of over hyped poseurs.

Didn't know about the politics, didn't care we were high,Iron Butterfly were great, Zeppelin blew me away.

I was 18 and went to the concert with my bf.
We were one of the lucky ones to get inside when it started pouring. I think the Youngbloods were playing when it started to rain.
It was an awesome concert..certainly one of a kind and besides a bit of violence because of people not allowed in..it was great.
I wouldn't trade the era I grew up in for anything.
Nothing like the 60's and 70's.