9/11 at the International Peace Garden 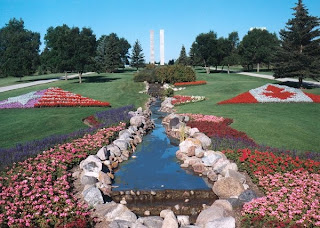 On Sunday at 11 am there will be a 9-11 memorial service at the historic International Peace Garden. Aside from it being a good symbolic place to have a ceremony, there is a more hands-on reason.

In June 2002 the Garden received ten girders from the World Trade Center to be part of an international memorial. At the time they were the only parts of the structure to leave America (I am not sure if there have been more since). There is also a book of remembrance set up in the chapel area.

If you have never been to the gardens, they are a beautiful place just 20 minutes south of Boissevain, (you don't have to cross the border to enter but do need ID to get back through the Canadian border station - see the bottom of the home page for information).

I'm not sure if the flowers are still going strong with this exceptionally warm year. I also am not sure what the ceremony entails as the site has no further details. Still, it's a fitting place to be on such a sad anniversary and a beautiful place to spend a warm September day !

September 11, 2001 - British-born Winnipegger Christine Egan, 55, is among the estimated 2,603 people killed in the World Trade Center attacks. Egan, a nurse-epidemiologist, got her PhD in community health services from the U of M when she was 53. She was visiting her brother Michael's office in one of the towers when it was struck.

NORAD's Canadian headquarters at CFB Winnipeg was put on high alert and when North American airspace was closed Winnipeg International Airport received 14 domestic and 3 international flights, for a total of 1500 passengers.

In 2002 the International Peace Gardens south of Boissevain received ten girders from the World Trade Center for a memorial. A book of remembrance listing all of those killed lies in the chapel.

Former Winnipegger Abigail Carter also lost her husband on September 11 when he was at WTC. Seems most Winnipeg newspapers miss that.