My column in the Winnipeg Free Press of January 31, 2016 was about Brandon's Syndicate Block fire of 100 years ago. Believed to be the city's deadliest blaze, it killed four people.

I wrote about 1,400 words for the column and could have written 1,400 more. Here is some of the research that I left out, (I can't republish the article itself here), that might be of interest.

For a bit of context, Brandon got off to a terrible start in 1916.

There were local war casualties, including at least one death. The city was in the midst of a terrible cold snap that included enough snow to shut down streetcar service for days at a time in January. On the 12th of January there was the Brandon Train Disaster, the city's deadliest day, when nineteen people were killed in CPR yards the heart of the city.

The bad luck kept coming when four days after the crash, what is believed to be the city's deadliest fire took place just a couple of blocks away. 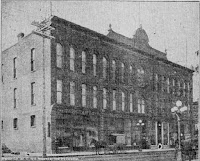 The Syndicate Block was built in 1892 at 702, 704 and 706 Rosser at Seventh Street, where the original Eaton's used to be. At 110 feet wide and 90 feet deep it was, according to one Brandon Sun article of the day, the largest commercial block built in the city.

The investors were a consortium of two of the building's original retailers: Adams Bros. of Toronto and Wilson and Smith. The architect was Frederick Chubb who designed five other Rosser avenue blocks that year.  The contractor was Frederick Cope, who also built the East Ward School and Brandon's 1891 city hall.

Businesses began moving into the Syndicate Block in the first months of 1893. Its earliest retailers were Beaver Hall clothing, Wilson and Smyth carpets and furniture, W. Dowling and Co. butchers and Adams Brothers harness and saddle makers. In 1893, the Ancient Order of United Workmen (AOUW) rented upstairs space as a large hall,

The following year, businessman A. D. Rankin bought out the Smyth of Wilson and Smyth and the company became known as Wilson and Rankin Co.. For him, it was the start of a 25 year stint as one of the city's best known businessmen.

Born and raised in Scotland, Andrew Douglas Rankin cut his teeth in retailing at the Hudson's Bay Company in Winnipeg then co-owned a dry goods store in Calgary before arriving in Brandon in 1891.

Rankin became an important part of the community. He sat on the school board for 14 years and was a life governor of the Brandon General Hospital, at times serving as chair of these organizations.

In 1910 Rankin was captain and adjutant of the 12th Manitoba Dragoons when he was asked to recruit for a new regiment, the 99th Manitoba Rangers, which he led until 1914. He attained the rank of Lieutenant Colonel and worked with the militia during World War I.

The Rankins lived on Seventh Street where they raised two children, Walter and Rena. Mrs. Rankin was well known for her work with the Women's Hospital Aid Society and other charities. She died on Boxing Day 1908 while visiting their ill son in Calgary. Walter ended up dying in March 1909. Both had funeral services at St. Paul's church and are buried in Brandon cemetery.

Within weeks, the store was back in business and by 1895 expanded its range of products to include dry goods and clothing, making it a full department store. They used the slogan "Brandon's Greatest Store" and even advertized in Winnipeg papers and distributed a sales catalogue throughout the West.

An 1896 ad also noted that they were the city's leading embalmers and undertakers, though that sideline appears to have been short lived.

Business was so good that in 1897 the retailer displaced the G. N. W. Telegraph Co office to take up more than half of the building's frontage.

Over the years the partners in the store, with the exception of A. D. Rankin, changed. The store at times was called A. D. Rankin and Co, The Merchants and in 1913 he joined forces with George F. Doig and J. M. Robertson to create Doig, Rankin and Robertson.

Newspaper ads show that this incarnation still carried dry goods and furniture but put a greater emphasis in newspaper ads on high fashion for women, including furs. 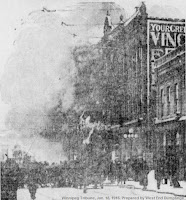 On the morning of January 17, 1916 employees on the main floor of the store noticed smoke coming from the the staff cloak room. Shortly after, there was a roar and flames appeared. Within minutes the building's interior was engulfed in flames.

Some employees jumped from upper floor windows, others never made it out. (You can read more about the fire here.) 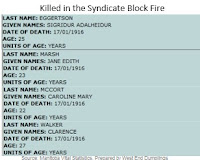 Over the next 24 hours four bodies, all employees, were found:

Clarence Walker, 27, manager of the furniture department of 26th Street. He left behind wife Irene and an infant child.Witnesses said he had escaped the building but was killed when he ran back in to save lives. He was married, (to Irene Nichols in August 1913), and the two had their first child, a daughter, in November 1914.

Miss Caroline McCort, 22, lived on Seventh Street with her mother. She was originally from the Chater area, McCort was a chorister and head of the Girl Guide troupe at St. Mary's church. .

The McCorts had a son who was fighting in the war. I doubt they could have imagined that it would be their daughter, a dress maker, that they would lose that year.


Miss Sigridur Eggertson, 25, was recently engaged. Winnipeg Tribune reported: "Sydney Lamontagne, who was to have married Miss Eggertson shortly, assisted with the search for the body and when the charred remains were discovered, became prostrated with grief.”

Eggertson was renting a room at the home of Mrs. D. A. Sutherland at 231 Fourth Street, her parents having moved to Saskatchewan a number of years before.   During the snap of brutally cold weather, McCort was also staying at the house. 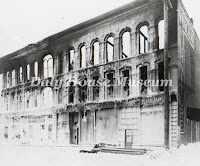 There were a couple of odd things that came up in the immediate aftermath of the fire that I didn't include in the article due to lack of space.

One was a complaint against Police Chief Esselmont by a man named Mark Hayward. He was a friend of Miss McCort's and when he heard of the fire and the fact that she was missing, came to the scene to rescue her. He had to be restrained by the police chief and others. He said he told the chief that he could see a face in a third floor window, but the chief brushed it off and told him to get behind the fire line.

The face in the window story saw Esselmont called before council, in-camera, to explain himself. Afterwards, an alderman came to his defence by saying that the police chief or any other official on the scene at the time said they saw a face.

The matter also came up at the two inquests into the fire and,a gain, no official or witness said that they saw a face. it was inferred that it would be impossible that someone could have survived that long in the heat and thick smoke on the third floor.

A second situation that arose almost immediately was the rumour that the fire had been deliberately set, perhaps targeting someone at the store. The Brandon Sun reported that some staff reported seeing a strange man with a briefcase hanging around near the entrance to the cloak room shortly before the fire began. None of those called to testify at either of the inquests confirmed that they saw such a man.

The rumour continued to grow for weeks and ended up involving Mr. A. Shewan of Nation and Shewan, another clothing store in town.

Shewan had offered employees of Doig, Rankin and Robertson, especially those that had no family in town to support them, temporary employment until the retailer found new premises. By the end of January the word around town was that Shewan had received an anonymous letter saying that his store was next. The Sun approached Shewan and he vehemently denied receiving any such threat.

There were two inquiries into the fire. One by the city's coroner and another by the province's Assistant Fire Commissioner Harry O'Connor.

Many witnesses testified that they found the upper floor windows they had to open to access the fire escapes to be difficult, in some cases impossible, to open. On the third floor, where three of the victims were from, there was only one window that was budged, slid open by 20 inches. (Most cities by this time required that there be doors or hinged windows used to access fire escapes.)

The O'Connor inquiry went into more detail about the actual cause of the fire.

He concluded that it was due to a smoker carelessly disposing of a match in the cloak room waste bin, (read is full report here.) It was certainly circumstantial conclusion. None of the testimony of a dozen or so witnesses were able to definitively say that they saw someone smoking in the room. One witness who had fingered the company accountant in his statement to the police as leaving the room smoking moments before the fire started, changed his testimony at the inquest.

No person or persons were found to be responsible for setting the blaze.

As for Doig, Rankin and Robertson, they vowed to rebuild the store and six weeks later opened a temporary location at 150 and 152 Tenth Street.

On Saturday July 8th their new building opened on the site of the old one. It was two storeys tall, 75 feet wide and built of steel and reinforced concrete, thus "virtually fireproof". Most of the store's original staff returned.

Just four days before the new store opened, Rankin announced his retirement from business. He had been travelling a fair deal in the years prior to the fire, so the announcement was likely not a shock.

Rankin left Brandon, his whereabouts and the date of his death I cannot find. Interestingly, the family plot at the Brandon Municipal Cemetery contains his wife, son and daughter, but no A. D. Rankin.