The Aagaard Brothers in Brandon 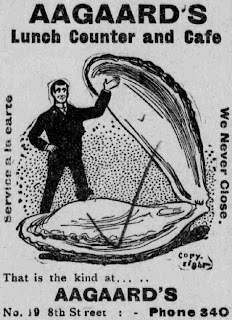 The Aagaard name is one that I come across often in my research of Brandon's history.

What drew me to them was their great advertising for Aagaard's Café at 29 Eight Street. Most newspapers of the day, especially smaller outfits like the Brandon Sun, were not big into graphic (or photographic) ads in the early 1900s. What few there were usually belonged to regional or national chains. Aagaard's, though, was the exception as you will see below.

Also, I was intrigued as to why and how a small-town prairie restaurant would specialize in oysters. How they got them there 'fresh' from Baltimore in 1903 is a bit of a mystery to me !

Here's a history of the the Aagaard brothers in Brandon. 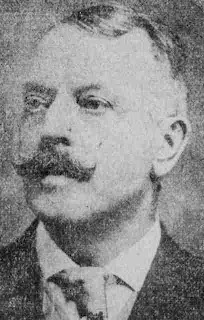 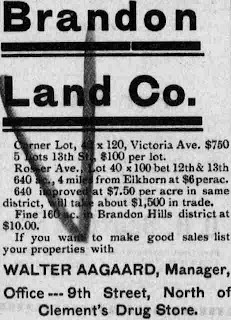 The Aagaards were a Danish American family from Minnesota, (for a genealogical look at the Aagaard Family.) The first brother to make an appearance in Brandon was Walter, with wife Mathilda, when he purchased the Brandon Land Company from a Mr. Todd in January 1903. Later that year, older brother Tenney appears on the scene.

In November 1903, the brothers opened the Brandon Lunch Counter, which they rechristened Aagaard's Café the following year. Tenney managed the combination restaurant and fine food store located at 29 Eight Street.

From its early days, the Aagaard Café proved to be a hit. It offered late night hours, a lunch menu from open to close, an oyster bar and soon boasted that it was Brandon's first "no-tip" restaurant.

The hours and menu likely were meant to cater to travellers.

Located near the CPR Depot, Aagaard's was across the street from the Imperial Hotel and Beaubier's Empire Hotel was just around the corner on Rosser. At some point, likely after a 1910 expansion of the Empire, the two buildings were joined via a rear walkway and Aagaard's probably acted as the hotel's café. 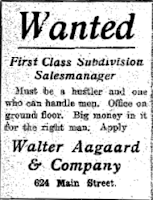 As for Walter's other business, the land company appeared to be doing well. In 1913, ads appear for his Winnipeg branch office on Main Street selling property in new suburban developments.

The 1920s should have been a comfortable decade for the Aagaard's but things began to go sour as Walter was being chased by creditors. In 1921 he got rid of, or leased to new management, the café. Roscoe James and George Ekonomy reopened it as the Elite Café. 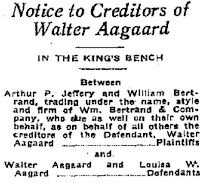 In a bid to ward off creditors, Walter signed over this assets to his wife but that move was challenged in the courts and in 1922 he lost everything. That same year, Walter and his wife took a trip to France and then returned to the U.S..

Tenney, who by this time was married to a Canadian woman and had two children, also appears to have returned to the U.S..

The Aagaard Café era in Brandon was over.

The Elite Café didn't last long. By 1923 it was advertised as "for lease" in Brandon and Winnipeg papers.

It may have sat empty for a time. The 1925, 1927 and 1929 Brandon Henderson Directories show no business listed at the address 29 Eight street. In 1930 or 31, the building was finally purchased by Andrew Digney, a theatre owner from Carberry. It was extensively renovated, reopening on September 10, 1931 as the Oak Theatre.

Here are some more Aagaard ads: 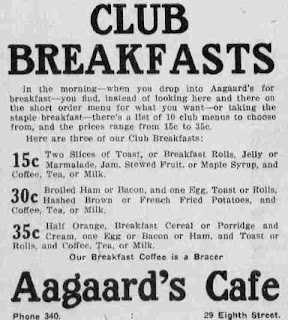 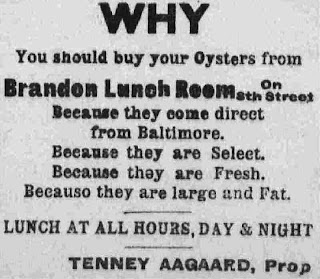 Note: this work is copyright Christian Cassidy. To reproduce it in whole or in part please request permission.

Yes i will have to try this and see if it really works for me thanks for the information.

Thanks anon, I did notice Aagaard farms when doing my research but couldn't find a direct connection between these brothers and the farm.

They both appeared to have left Brandon, at least for a time, in 1923 and died in their native USA.

That's not to say, of course, that one came back or that another relative also came and began farming.

Hello! I was pleased to find your blog on the Aagaard cafe while researching family history on the net. Walter and Tenney Aagaard were my grandmother Hazel's brothers. Their father was Walter S Aagaard Sr, a real-estate agent from Worthington, MN. (perhaps some confusion here between Sr/Jr?)The whole family came to Brandon around 1902, but the parents returned to St Paul ten years later, apparently leaving Tenny in charge. I had never heard of a bankruptcy! My dad often said that Walter's wife, Louisa, (herself the daughter of a saloon owner)ran the cafe "with one eye on the cash register and the other on the ice-box" - ie, always on guard against food pilferage by the staff! The 3 brothers (Tenny, Walter S Jr and Russell) all wound up in the Chicago area and were quite successful. Thanks! Robert Granbeck grnbek@usfamily.net