Video re-uploaded to You Tube 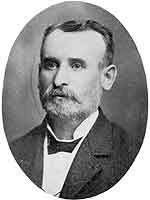 
Today is the 100th anniversary of the death of Samuel Hooper. You probably don't know his name but you certainly know his work.

Hooper was born in Hatherleigh, Devon, England in 1851 and came to Canada with his family in 1869. He trained as a stone carver / monument designer and in 1880 found his way to Manitoba, settling in Winnipeg the following year.

Hooper went into business with David Ede and worked mainly on graveside memorials and headstones. In 1884 he bought out his partner and created Hooper's Marble Works. Before long, he was designing some of the city's most prominent monuments, including many for the grounds of the old city hall.

In the mid 1890s Hooper returned to England to receive formal training as an architect, which was the Hooper family business. (One sibling, bother Thomas Hooper, was an architect who spent time in Winnipeg before making a name for himself in British Columbia.) 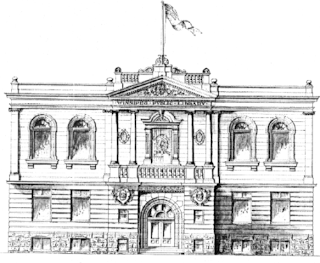 
When he returned to Winnipeg Hooper began putting his education to work.

One of his first commissions was the 1896 St. Mary's Cathedral. The second Grain Exchange Building soon followed. There was also some government work, projects such as Winnipeg's Carnegie Library and Land Titles Building.

In 1903 he was commissioned by the Manitoba government to create the 'prairie schoolhouse'. He made three designs, named Number 1, 2 and 3. Each varied in size and expense but all had to be simple enough that they could be shipped to towns and villages and assembled by local labour. These schoolhouses dotted the prairies and many were in use for generations. On June 6,1904 Hooper was appointed as the first Provincial Architect of Manitoba. He designed the jails, land titles offices and courthouses for town across Manitoba, some 30 buildings in total. 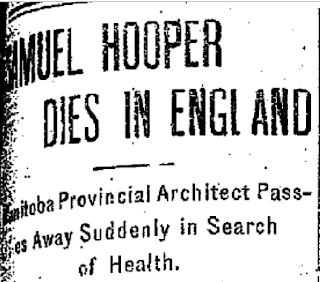 
Sadly, Hooper was an ill man. He suffered from acute bronchitis and asthma throughout his adult life and often traveled in winter to get away from the cold. In 1911 he went to England to seek new out new medical treatments for his ailments when he died.

Hooper's body was returned to Winnipeg and he is buried in Elmwood cemetery.

The year prior to his death was a time of great growth in Manitoba and Hooper was a busy man. There were designs for $3m worth of Hooper-designed buildings awaiting construction. They ranged from a new Legislature to a greatly expanded Brandon Insane Asylum. It is unclear whether parts of those drawings were incorporated into the buildings we see there today. One set of buildings he designed that year was the U of M's Fort Garry Campus. Many of the original (orange brick) structures such as Tache Hall, the Fitzgerald Building, Agricultural College, Powerhouse and the Administration building were his designs and built after his death.


Above is a compilation of many of Hooper's buildings in a video slideshow !

Below is what I believe to be the most comprehensive list of Hooper's works. It is compiled from other lists that I have found on-line as well as from newspaper and magazine articles from the day.

I am working on a 'master list' with photos, reference links, current locations and maybe even a map placement for each of them but that will take a little longer !

After his death: (These are co-credited with V. W. Horwood who succeeded Hooper as Provincial Architect.)

A few entries in more detail : Thanks but watch the video again ! Flickr only uploaded the first two minutes of it. I reposted to YouTube.

The land titles building in Portage is amazing. I did a pre purchase inspection of the place and was dumbfounded by the barrel valuted ceilings made of brick. This guy was good.
Great post

My name is Karen Norvell My Grandmother Jean Simpson Hooper was Samuels granddaughter I am trying to find information on his family to whomever wrote this please contact me dancon@shaw.ca