Thirsty in Brandon: A history of the waterworks (Part 1) 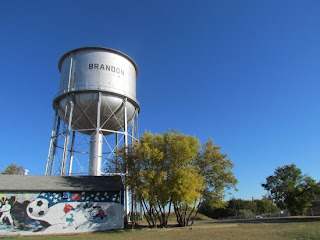 Source: eBrandon Forums
Brandon city council approved the 2012 demolition of the city's 80 year old water tower. Manufactured in 1930 by the Horton Steel Works of Bridgeburg, Ontario, the 625,000 gallon* beast has served the community from 1931 until its decommissioning in 2001. Next week, however, council will be asked to revisit their decision (more of the debate here).

I thought this would be a great time to look back on Brandon's 120 years of waterworks and how the tower fits into it.

Part 1: The waterworks before the tower 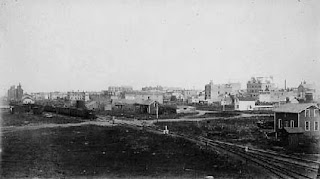 Brandon in 1890 (MHS TimeLinks)
In 1891 the nine year-old City of Brandon received the go ahead from the province to establish and operate a municipally owned waterworks system. That summer they began digging a well on what was thought to be a 'sure bet’ location between 9th and 10th near Victoria but it proved a dud. There was water, but not enough to meet the city’s needs.

As summer drew to a close, the city had little to show for all of their test drilling and gave up on a well, looking instead to the Assiniboine River. 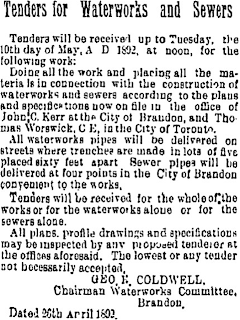 In September voters passed a money referendum to allow the city to borrow $75,000 for the construction of a waterworks system. Engineers J. Green and R. Crawford were put in charge and tenders were issued in April of 1892. 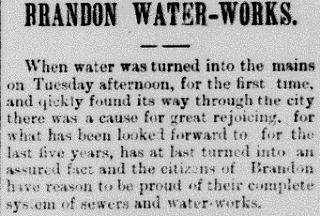 On September 12, 1893 the system was tested for the first time. The Brandon Mail gushed (no pun intended) that “the whole thing will be a grand success” and it appears that it was.

That afternoon the mayor, aldermen and members of the fire department were stationed at each fire hydrant waiting for the water to arrive. Once the system was at full pressure, the testing began. There was 60 lbs of pressure in the hydrants, enough to shoot the water 80 feet.

This, too, was to be the source of the city's drinking water. Brandon was just the second water system in Canada to use a pressure mechanical filter (source) and according to a reporter "The water is most excellent....and gives every satisfaction" (Brandon Sun Weekly September 14, 1893).

After the test, the filters were cleaned and a couple of water main repairs were made to weak spots in the system. The plant's equipment was given the seal of approval by a Mr. Kolb from New York (presumably from the company who supplied the machinery.)

There was no word on how the sewage end of the system performed ! 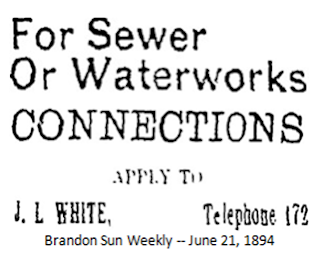 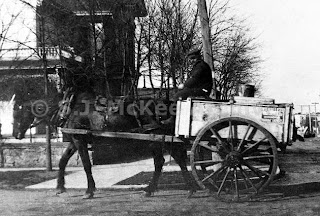 Brandonites had their water, or at least those who could afford the $8.00 hook-up charge ! For those who couldn't, there was still your friendly neighbourhood water delivery man ! 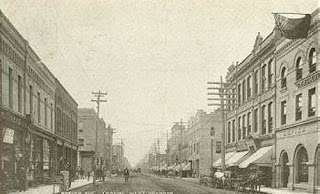 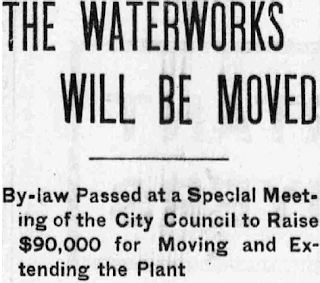 The city set aside $90,000 for a project that would lay 15,500 feet of new water mains, build a new river intake off of 26th and McDonald and a new water plant 1000 yards away, (the modern incarnation of the intake and plant are still located there.)

In 1912 another round of improvements were made. Though there was another climb in population, from 10,408 in 1906 to 13,839 in 1912, it was not the capacity of the plant that was the issue, it was the quality of the water. People began complaining about discolouration and sediment levels that by 1912 made the water " ...almost unfit for use" (Brandon Daily Sun April 24, 1912). Taxpayers approved $200,000 to be spent mainly on water purification through more sedimentation beds and a new filtration system. 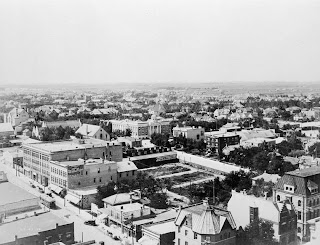 There were no changes to the system between 1913 and the late 1920s. Brandon was still relying on a 'direct pumping' system for its water supply, whereby water was drawn from the river, took a spin though the filtration system and was then pumped out through the mains. This was causing a number of problems for the city.

* All newspaper accounts and Henderson Directory entries that I came across say that the tank is 625,000 gallons. It is only in accounts from this decade that the 675,000 gallon total is used.

Note: additional source information will be at the end of part 2 !
© Christian Cassidy. Please do note duplicate or repost this material without consent of the writer.
For more Brandon history related posts.

Knew this all but you presented it well. The pics I do not have. I am waiting for part 2. Keep up the great work!

Thanks. Part 2 goes up tomorrow!