With the fourth incarnation of a Winnipeg Jets' home opener coming up on Sunday, I thought I would look back at the very first big league home opener in 1972 ! Surprisingly, it was a subdued affair that had more to do with courtroom action than anything on the ice. 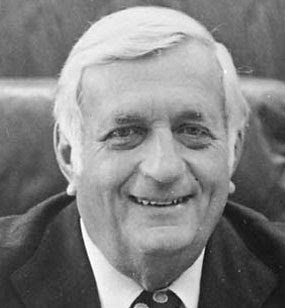 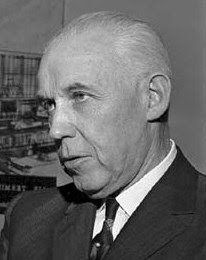 One afternoon in 1971, Ben Hatskin was on the phone with NHL president Clarence Campbell inquiring about obtaining an NHL team for Winnipeg. Hatskin recounts:
“(Campbell) was very pleasant when I asked what it would cost me to get a franchise. He told me that by the time an opening for a Winnipeg bid could be considered I'd have to think in terms of $7.2 million plus a rink with at least 16,000 seats [the Winnipeg Arena can handle 10,500]. I thanked him and hung up."
(Weekend Magazine, October 7, 1972)

During the call Hatskin says that he doodled on his notepad the letters W-H-A. Not for “World Hockey Association” but for “Without Hull Anyway”, meaning that after investing all that money there would be nothing left to attract caliber players like Bobby Hull. He immediately began looking for alternatives. 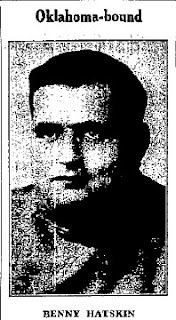 If anyone could find a way around the NHL it was Hatskin.

The North End boy was a sports legend in Winnipeg in both football and hockey. In 1939 made headlines when he was scouted by the University of Oklahoma. His sports career included a stint with the Blue Bombers and as coach and manager of a number of local junior hockey and football teams. By 1971 he was a successful businessman, his interests included the upscale The Towers Night Club, racehorses and the Winnipeg Jets of the Canadian Major Junior Hockey League.

Brash and colourful, he wasn't afraid to mix it up with the local media, league commissioners or anyone who got in his way. As a Bomber in the early 1940s he demanded - and received - "professional scale" pay for his services after getting offers from both the Chicago Bears and New York Giants to try out. In the late 1960's he showed up at a Winnipeg Enterprises board meeting threatening to move the "Junior Jets" out of town when informed that WEC couldn't guarantee him the availability of the Arena for playoff dates at the beginning of the regular season.

The NHL certainly wasn’t concerned about the upstart WHA when it was formed in 1971. After all, it seemed pretty bush-league with an unlikely collection of mostly small and medium sized markets. Even when some NHL players jumped over to the new league, Clarence Campbell said:

"The decision to pursue players is up to the individual clubs. But I'm not sure that the players they've announced are good enough to pursue."
(CP wire story in Winnipeg Free Press, September 28, 1972) 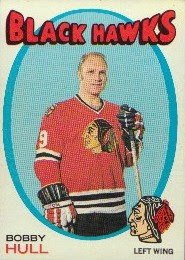 Hull's 1971-72 card
In May rumours were swirling that that 33 year-old Chicago Black Hawk star Bobby Hull was jumping to the new league. Even after Hatskin and Hull confirmed that they had reached a verbal agreement, some thought it was a ploy for a Hull pay raise or a stunt to rattle the NHL. After all, a $2.75 m, ($1 m of that up-front), ten-year contract to play hockey was unheard of. By cpomparison, Hull's current salary with the Black Hawks was thought to be a handsome $150,000. 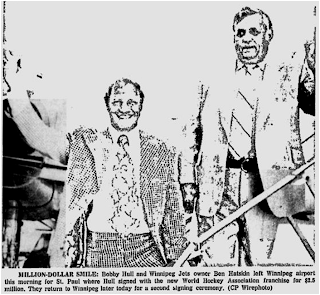 On June 27, 1972 the hockey world sat up and took notice of the WHA when Hull arrived in Winnipeg to sign the deal with Hatskin.

The NHL immediately jumped into action and began legal proceedings on behalf of the league and the Black Hawks. Within a couple of weeks there were ten lawsuits as other name players left the NHL, for example Boston's Gerry Cheevers off to the Cleveland Crusaders.

The basis of the suits had to do with the one year reserve clause that every NHL player, (and most pro-athletes at the time) had in their contract. It stated that the team who owned the player had a one year option period after the player’s contract ended to decide what they wanted to do with him. This meant that a player had to be traded to another team by his existing team rather than just waiting out his contract and signing as a free agent - unless, of course, he didn’t mind sitting on the sidelines for an entire year waiting out the option. (See below for links that go into more detail about the legal battles between the leagues). 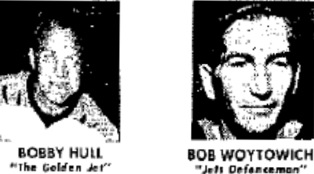 The NHL was successful in getting restraining orders against the WHL 'jumpers' including Winnipeg's Bobby Hull and Bob Woytowich. Hull's order, (and presumably all of them), precluded him from having anything to do with the Jets including any publicity, media interviews or even showing up to practice. As a result, he was nowhere to be seen at training camp and WHA fans across the league began to fear that they would not see their marquee players for an entire season.

In courtrooms in Chicago and Philadelphia it resembled a bench clearing brawl with numerous suits and counter suits underway involving various groupings of the NHL, WHA, Hull, the Winnipeg Jets and the Chicago Black Hawks. The first sign of a break came on September 29, 1972 when a Chicago judge freed Hull to join the team at least for practices and to perform coaching duties but no hockey until at least October 8th when the NHL's latest restraining order (issued in Chicago) expired. That same day Gerry Cheevers and Derek Sanderson were given the green light to play for their WHA teams. The Jets knew that it could be a matter of days before the Golden Jet took to the ice. 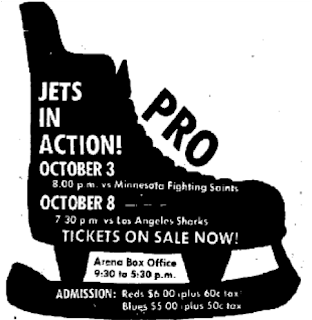 September 30, 1972, Winnipeg Free Press
In the meantime, the Jets were gearing up for their first WHA season but there were a number of problems in the lead-up.

Fans were complaining about ticket prices, $6 for reds and $5 for blues (plus 10% tax and ticket fee) and the fact that, aside from Hull, the starting lineup was thin on talent. Free Press Columnist Reyn Davis eventually wrote:


Certainly, better teams have been put on the ice, perhaps even in Winnipeg. But none has ever served this city as far and wide, wearing our colors, carrying our hopes for our enjoyment. Winnipeggers are just itching for that moment when everyone simultaneously casts aside all inhibitions for two and a half hours of joint jubilation. I've seen it happen and I can't wait until the latent major league complex of this city comes to the fore....

All I'm trying to say is that we've got a major league hockey team, now let's treat it like one . . . or give it to some other city that has the aptitude, the enthusiasm and the resources to treat it as such.
(October 5, 1972 Winnipeg Free Press)

Their on-ice performance was weak.

The Jets lost their first exhibition game, October 1, 1972, to the Minnesota Fighting Saints in Duluth by a score of 7 – 5. Two nights later was the exhibition home opener against the Saints. With Hull as an assistant coach and in front of just 1,700 fans, they again lost 5 -2. The next game was a 6-3 loss to the Alberta Oilers.

Off the ice, the Jets were dealt a blow when the Philadelphia judge extended the NHL's restraining order against Hull until October 24th, meaning that the Golden Jet would miss the Jets’ first regular season game on October 12th in New York against the Raiders. Hull, now unable to coach or play, was in the stands when Winnipeg beat New York 6 – 4. The following night the Jets squeaked out a 4 - 3 win over Minnesota.

The home opener was played Sunday, October 15 against the Alberta Oilers. Despite being undefeated, there were only 8,000 fans in attendance. The pre-game ceremonies saw the Jets take to the ice under spotlight while introduced by Don Wittman. Both Haskins and Bobby Hull received minutes-long standing ovations. Doug Crosley sang the national anthem.

Then it was the turn of the dignitaries, including Lieutenant Governor Jack McKeag, Attorney-General Al Mackling and Mayor Steve Juba. The ‘line of the night’ has to go to Juba who said:

"The National Hockey League turned deaf ears on us for years; I hope they go into receivership"
(October 16, 1972 Winnipeg Free Press).

The Jets lost the game 5-2. Hull said that the team was too tight trying to look good in front of the home crowd. Interestingly, coverage of the game in the Free Press was on the fourth page of the sports section, behind the Bombers and even the NHL.

There was a third 'home opener' for the Jets that season. The first game with Bobby Hull !

On November 8, 1972 Judge Higginbotham of Philadelphia handed down a 300 page ruling that cleared Hull to play and effectively gutted the one year reserve clause in pro-sports contracts. It took until the following afternoon, just two hours before game time, for the Chicago restraining order to be dissolved based on the Philadelphia ruling. The Jets took to the ice in Quebec City with Bobby Hull and went on to a 3-2 loss. 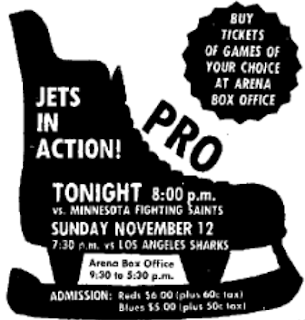 Hull’s first game on Winnipeg ice was Friday November 10, 1972 against Minnesota. It should have met with great anticipation but there were only 7,500 fans in attendance. Hull and the Jets were sluggish after coming off a grueling road trip and the Jets lost 5 – 1.

That outstanding court case in Chicago led to Hull being ordered back off the ice on November 21, 1972. The following day his lawyers appealed and the injunction was lifted and he returned to the Jets' lineup.

The legal battles would continue on but it wouldn't impact the Jets' lineup. The team now had Bobby Hull for keeps and were ready to take the WHA by storm !

For more on the legal battle between the leagues:
Hockey's turn to wage war Sports Illustrated (1972)
NHL - WHA History Hockey Blog in Canada

I'd like to point out a couple of small errors- Hull was ordered off the ice again in 1972, not 1970, and Hatskin would have demanded proper wages from the Giants, not the Jets. The piece perhaps should have also noted that Hull was barred from playing in the Canada- Russia summit series because he had jumped leagues which became a national cause celebre.

Thank you. I will make those two corrections.

I did read some of the back and forth about the Russia series. It was quite a war the two leagues had going !

A great blog you have here, really enjoying it. I'm a former Winnipegger who is in Japan now, but we are thinking of coming back next spring. Blogs like this are a really good reconnect.

That's great to hear JJ thanks !