I'm afraid that I might have my blogging license pulled if I don't comment on the election so here are some thoughts...

There were no real surprises for me. Actually, if you check last week's Bloggers weigh-in in the FreeP this is what I said and I stick to it:

My head says the NDP wins with a slightly smaller majority.

Even with the economic downturn and flood, Manitoba has fared well over the last couple of years — better than what many jurisdictions can claim. Given that we’re a pretty conservative bunch, people likely won’t want to change horses.

If the Tories wanted to create a ‘boot the rascals out’ feeling, they needed to show early in the race a platform or vision that the NDP couldn’t match. Instead, both offered a variation on the same theme.

My heart? It wasn’t in this campaign. The only emotion I felt was displeasure at those American-style political ads and brochures that filled the airwaves and mailboxes. 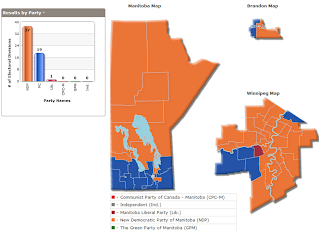 Source: Elections Manitoba
TO THE WINNERS:

Greg Selinger, obviously, for leading the NDP to a an historic fourth consecutive majority government. Being appointed Premier is one thing but actually winning it at the polls must give it a whole new level of personal satisfaction.

One question: was it a case of poor communications or did someone make a conscious decision to hold his acceptance speech in the midst of McFadyen's seppuku ? It reflected badly on him.

Jon Gerard was left for dead long ago, eulogized and his grave was dug. He even had a couple of colleagues whack him with sticks to make sure he was gone. Yet, here he is back with a seat for four more years.

Granted, the historic low level of Liberal support likely means the clock is ticking but people have said that after every election he's been part of. If he's smart, it's soon time to begin the ball rolling on a long, orderly transition to new leadership for the next election.

Local Media. I did a bit of channel surfing before settling into the Free Press live coverage in the background.

The four TV stations that covered it, CTV (though they cut their coverage in time for Dancing with the Stars), CBC, CBWFT and Global all did a good job, from what I saw. Decent graphics and info packages, live feeds, the requisite number of talking heads. It would be nice to see that at the next civic election.

The FreeP live coverage from the Free Press Café was good. They got some flack for cutting away from McFadyen's speech to go to Selinger's but, hey, when you're at the Oscars you want to hear what the Best Actor winner has to say over the runners up.

The Sun, assuming a lack of big-tatted women and / or assassinations, appear to have given live coverage a pass.

Manitoba Election.ca. The indie ManitobaElections.ca was the best election site out there.

We had Kyle Geske on last week's WIPS to talk about the site and their plans for the future. They are keeping it up indefinitely and it will continue to aggregate media coverage, just as their WinnipegElection.ca is doing. They are hoping to do an in-between-elections site, similar to openparliament.ca. I can't wait !

Hugh McFadyen gets the night's sad trombone. Kudos for choosing to step down election night rather than wait to be dissected by his caucus over a period of weeks.

Back to the drawing board, again, Tories.

Manitobans for recording what could end up being the second lowest voter turnout in history at 56%. (Source: Figure one of this study).

It points out something that elections officials have wondered about: by providing all sorts of advance polling options are we increasing voter turnout or just spreading the same number of voters over more polling hours.

Yeah, I know, there are a million excuses not to go vote. Really, though, there is no excuse.


MY 'PERSON TO WATCH' THIS TERM

The NDP's Kevin Chief. Young, articulate, aboriginal and representing a heavily aboriginal riding. I will be interested to see if he will be able to turn some of his smarts and community experience into something special on the floor of the Leg and into a cabinet post.

As we've seen of late, aboriginal issues are still a hot button topic and haven't advanced for many over the decades. He could be a great benefit to people on all sides of the issue.

Some people took offense at Selinger's decision to cut into McFadyen's speech, but why did it take Hugh so long to get up to the podium? Nearly an hour passed between Gerrard's speech and McFadyen's... the CBC hosts were running out of things to talk about. Selinger could only be expected to wait so long.

There is no set time for an opposition leader to give his acceptance speech. In every election I have ever seen, the winner gives the loser lots of room to thank his supporters and publicly congratulate the winner, which McFadyen did. He clearly had some big decisions to make before speaking, and 10 pm is not really that late. The move made Selinger look really ungracious in victory and does not engender a lot of good will.

The word around here today is that both men were cutting dangerously close to the 10:30 deadline before Global cut away to their newscast. Only CBC was still on air after thta.

Enjoyed Colin on the Freep News Cafe but host Tania Kohut was in WAY over her head.

And curtis' collar was sticking up on one side which was rather annoying !

As a North Ender I'm particularly excited to see how Kevin Chief pans out - I hope it isn't a case of his one voice being too small to be heard. He will be an asset for Point Douglas (which really includes most if not all of William Whyte and half of St. John's as well as Lord Selkirk Park, parts of Dufferin and I believe Burrows Central as well) and I wish him well. It was a joy to see that he triumphed so mightily over Mr. War Zone Vernaus.