John A. McDonald dies in Brandon

No, not former Prime Minister John A. Macdonald, but John A. McDonald the long-time Brandon merchant ! He died in Brandon on December 2, 1945 at the age of 81.

While skimming back through McDonald's history looking for a photo to use I came across a cast of characters and businesses that help tell the story of early Brandon. Here's what I found.

McDonald left his home in Lucknow, Ontario for Manitoba in 1882, eventually settling in the newly incorporated city of Brandon. 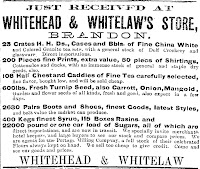 McDonald's first job was as bookkeeper for the firm of Whitehead and Whitelaw on Rosser Ave., one of Brandon's original businesses.

Thomas Whitehead, who the Brandon Weekly Sun (July 8, 1886) referred to as “one of the most popular men in the city”, retired back to Ontario in 1886 after nearly four years in Brandon. He sold his share in the company to Mr. Storme, a Portage la Prairie merchant, and the company carried on as Storme and Whitelaw until 1890 when the partnership was dissolved. 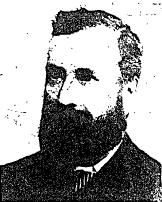 After Whitelaw's, McDonald went to work for another pioneer, Dr. Alexander Fleming. The Scottish doctor, trained at Glasgow and Harvard, came to Canada and settled first in New Brunswick where he practiced medicine for ten years. In 1867 he married Louisa Biden with whom he had ten children.

In 1881 the Flemings moved Brandon (which must have been quite the trek with ten kids in tow !) and he became the region's first doctor and opened its first pharmacy on Rosser Avenue. That same year he became the first secretary treasurer of the school board and before long was president of the Manitoba and North West Farmers Co-operative and a member of city council.

The province was stunned when Fleming died at his Louise Avenue home on the night of  November 26, 1897 from an apparent heart attack. He was only 56 and thought to be in excellent health. Earlier that day he showed no sign of any ill health, having performed surgery and attended an evening church meeting.

In Medicine in Manitoba: The story of its beginnings a colleague said of Fleming: "...he did things regardless of hardship. He was practically worshiped by the country people and attempted the most surgery at that time. He was certainly a fellow who was always on duty.” 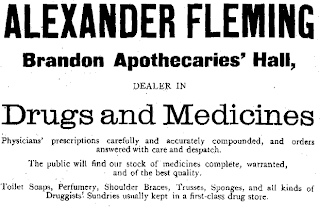 Fleming's son John William Fleming was a trained pharmacist who worked with his father for many years and he took over Fleming's Drug Store, (also called Fleming and Sons.) J.W. went on to be mayor of Brandon six times between 1902 and 1911. 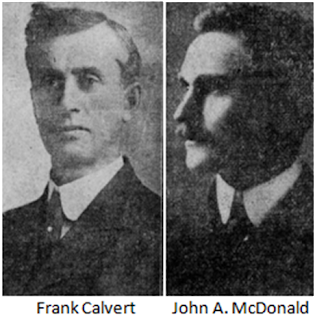 
The McDonald family, there were at least two sons and four daughters, settled into their home at 318 11th Street and John A. decided that it was time to get into business for himself. In 1896 he joined with Frank Calvert to create McDonald and Calvert, a men's clothing store, at 341 Rosser at 9th Street. 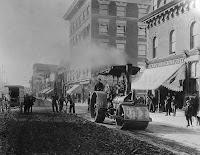 As the community boomed, so did the business. Thanks to its success the intersection of Rosser and 9th became very desirable, considered the heart of the city's downtown retail district. 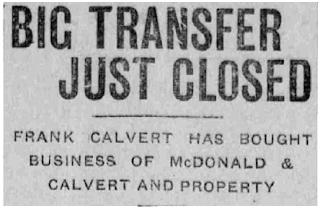 
On August 1, 1911 it was revealed that the partnership was over; McDonald had been bought out by Calvert. The store closed for renovations and was to reopen on August 5 named simply Frank Calvert's. 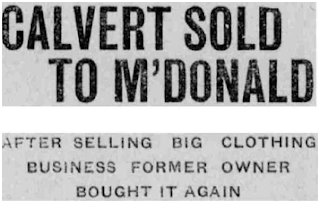 A little over a week later the tables turned. After some reflection McDonald realized that he had made a huge mistake by selling out and went back to Calvert offering to buy the business back off of him. Calvert agreed and in late August John A. McDonald, Outfitter to Men and Boys, opened to the public.

A few months later McDonald took another page out of Frank Calvert's book and got into municipal politics.

In April 1911 Calvert ran and won a city council by-election for Ward 2 but he did not run again in December 1911, (civic elections were held annually back then). John A. McDonald ran for Calvert's old seat and became the new alderman for Ward 2. In just his second year on council, McDonald was chair of the influential finance committee. 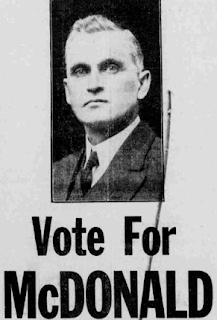 In 1914 Mayor Hughes decided not to run again due to poor health. McDonald risked his council seat to run for the top job. There was just one other candidate in the race, fellow small businessman Harry Cater, owner of Brandon Pump and Windmill Works. 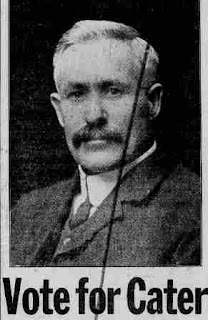 Cater was a formidable foe. He ran and lost the previous mayoral race, in part because the Brandon Daily Sun did not support him. Cater spent the year honing his 'man of the people' persona and in 1914 was the Sun's darling candidate. The paper gushed over him while at times openly ridiculed the pro-business platform put forth by McDonald.

Cater beat McDonald and served as Brandon's mayor for 18 of the next 20 years. McDonald, it seems, never tried his hand at politics again. 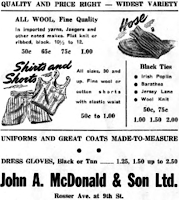 
McDonald's clothing store was doing well. By 1919 the store had expanded to include 837 – 841 Rosser Avenue. Son Angus K. McDonald joined his father in the business and by 1921 the store was renamed John McDonald and Son.

On December 2, 1945 at the age of 81 John A. McDonald died at his home and is buried in Brandon Cemetery.

In 1958 Angus and his wife Hazel retired to a home at 3265 Rosser Avenue. That same year the store, now managed by S. I. Segal, was renovated and expanded so that it could sell women's wear for the first time in its 62 year history.

In 1960 the store was bought by Winnipeg retailer Alex Mitchell and was rechristened Dayton Outfitters. After 64 years the McDonald name disappeared from Rosser Avenue.


This post is copyright Christian Cassidy and may not be reproduced in whole or part without permission of the author.

I am one of 4 people that now own and live in McDonald and Cater's beautiful former home. Just the 4th owner of this storied house!

That's great ! Did they both live there at one time ?

this picture: http://westenddumplings.blogspot.ca/2011/08/john-mcdonald-dies-in-brandon.html is not John McDonald but Ran McDonald who also played pro-hockey for the New Westminster Royals in the PCHA in the early 1910's. See: http://en.wikipedia.org/wiki/Ran_McDonald

Thanks Danny. I will go back to the Brandon Sun archives and see what other pics I can find of the guy to confirm. I'm quite certain that picture appeared in the Brandon Sun above an article about his death, so either they screwed up back in the day by not knowing who one of the more prominent businessmen in their city looked like or the modern day wikipedia used the wrong photo.

Here is the source of the photo from the Brandon newspaper http://manitobia.ca/content/en/newspapers/BDS/1911/08/15/articles/26.xml/iarchives

For now, i am going to stick with the Brandon Sun's 1911 report.

I don't use wikipedia 99% of the time and actually in wikipedia's own website they say not to trust them. While I appreciate this photo issue being pointed out so that I was able to go back and confirm, it is not good practice to go around emailing researchers that their stuff is "wrong" because a wikipedia entry differs from it: http://en.wikipedia.org/wiki/Wikipedia:Ten_things_you_may_not_know_about_Wikipedia#We_do_not_expect_you_to_trust_us

I will certainly keep my eyes peeled in future and if I come across articles about either McDonald will make note of what images are provided just to be sure.

I'm part of the SIHR (Society for International Hockey Research), and we have the hockey picture on our database. For this information, I can assure that it is 100% Ran McDonald the hockey player who's on Wikipedia's link I gave you.

The link you provided though with a picture of McDonald with a mustache, is indeed John A.

The one I was pointing out was the one without the mustache, with the "Vote For McDonald" mention. That one looks a lot like Ran McDonald. His full name was Ranald J. McDonald. I'm guessing the J could have been the source for the confusion between the two men if there is one.

I would just say to double-check once again. Sadly our database is only available to members so I can't provide any links. The only extra info about Ranald is I know he died in Vancouver in 1950.

I might be wrong though... I just thought it needed a second verification. Also since I ended up on your blog while researching for more Ran McDonald's picture.

Anyhow good job on the blog ;)


Are you guys looking for Mcdonald Survey at McdVoice.com? Want some free food from McDonald? Here in this article, check all the details.
mcdvoice survey

This is a smart blog. I mean it. You have so much knowledge about this issue, and so much passion. You also know how to make people rally behind it, obviously from the responses.McDVoice