I've been negative on the subject of Manitoba heritage lately but Brandon, of all places, has come through with a couple of wins in recent days.

First off, they have increased their online heritage presence exponentially with the Heritage Brandon website. It's still a work in progress but already an impressive index of heritage resources in the city. The second bit of good news is that Brandon's CPR station, ca. 1912, has a new lease on life after sitting empty for a number of years. Westman Immigrant Services will be leasing the space which will allow the owner John Hooker (also the owner the now collapsed block just up the road) to renovate it. (See Brandon Sun and eBrandon.ca).

I thought I would take a look back at the building. One of just a few examples of Brandon's grand architectural past that has survived .... 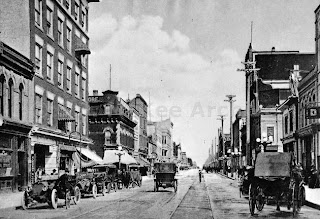 Brandon faced a period of explosive growth as the railway opened up the Canadian West.

By 1910 Canada’s four major railways, Canadian Pacific; Canadian National, Grand Trunk Pacific and Canadian Northern already had a presence in and around the city. The 27 spur and branch lines running through the vicinity carried 348 passenger and 478 general trains every week. 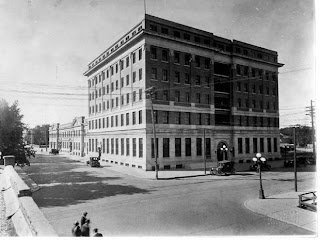 Rail infrastructure built just a few years earlier was bursting at the seams and desperately needed expansion. CN was first out of the gate in 1910 with a $500k project, (about $10m in 2011 dollars), that included a new depot and the seven storey Prince Edward Hotel on 9th Street.

In July 1911 the CPR followed with a more modest $60,000 contract for its new passenger depot. It would be located beside the existing one at the foot of 10th Street. 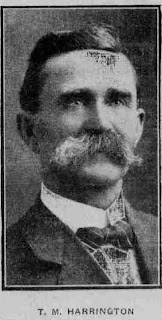 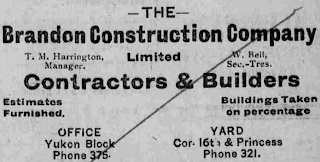 The firm that built the depot was the Brandon Construction Company. Under General Manager T. M. Harrington it was one of the premiere building firms in the city at the time. Their first large project was the Christie Block and from 1900 – 1911 were responsible for construction of the McKenzie Block, Brandon's Courthouse, the 'Victoria Avenue Methodist Church' and the Asylum Powerhouse. They also worked further west, credited with building the Presbyterian Church in Swift Current SK. Great news. That's a big win for downtown Brandon - a building like that is irreplaceable.

Some exciting things going on, but let's not get too excited (can there be a more 'Manitoban' sentiment than that?) just yet.

There's some serious problems in Brandon concerning how our own heritage is viewed and respected. I won't suggest they're systemic but they are deeply-rooted and long-standing.

I'm glad you mentioned the Brown Block. That situation is appalling and it's worthy of note that the Hooker family (or a complex series of numbered companies) held the deed to that building at the time of its partial collapse.
Less than 15 years ago, that heritage building was full of businesses and thriving...now this.

Business owners trying to make a go of it in the city's downtown, especially in heritage buildings, face obstacles they simply shouldn't have to face -- one of the biggest being a disgracefully-negative attitude among most citizens to the downtown.

Any heritage building that has managed to survive this long in Brandon has done so in spite of neglect and indifference among generations of councils, landlords (slumlords?) and citizens. Actually, indifference has ended up being an ally to some of them as 'involvement' has ended up with things like the Brown Block.

A few years back I worked on Brandon projects and it drove me nuts how little people knew or cared about the heritage and history of the city. Heck, there were times when I couldn't get Brandonites to come downtown and meet me for supper because it was 'after dark' and they wouldn't come downtown.

It's really a shame as outside the downtown the city has about the same charm as McPhillips Street in Winnipeg.

Of the many laughable aspects of life in a small town, one of the biggest belly laughs comes from people terrified of going "downtown" after 5pm...better to retreat to their suburban bunkers and only venture out to box stores or chain restaurants, if at all.

It's bizarre. I can't help but think racism is behind at least some of the terror. I guess it's hard to form accurate judgments when encased in an SUV.

It's also tragic, since there are some real gems and terrific potential here -- anyone from out of town invariably sees it, and yet it's totally invisible to so many here. It boils down to a lack of will...people just fear change and few want to be the first one to do anything.

A point of accuracy: I should note that the Hooker family only purchased the Brown Block in December 2010. The previous title holder was John Laurence, who lost both that property and the ones across the street in recent years after more than 2 decades of ownership. As I said when I first came here, all the spots in the building were occupied by businesses and the structure was maintained.