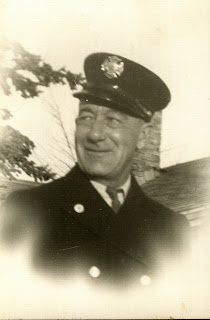 A forgotten Brandon firefighter finally gets the recognition he deserves. First, a bit about the fire that cost him his life.... 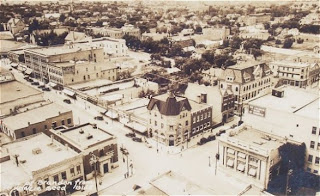 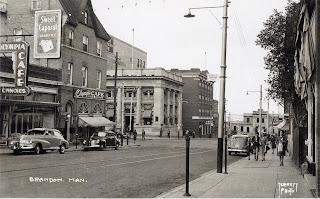 The Olympia block (left) ca.1940. (Source: Peel's)
In the heart of downtown Brandon, 108 - 10th Street at Rosser to be exact, stood the ca. 1883 Olympia Block. It housed the London Life Insurance Co, The Olympia Café, a dentist and a couple of residential suites.

Just after the lunchtime rush on Monday, April 6th, 1953, a fire broke out in the basement of the café. Fire crews were on the scene quickly but what appeared to be a manageable fire soon grew out of control. 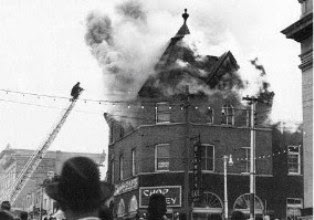 Olympia Block, April 6, 1953. (Source unknown)
A team of firefighters entered the building but when the smoke and flames intensified they had to evacuate. One man, Frederick J. Brown, (57), did not make it out. Hours later, Brown's body was found in the basement of the Olympia Block. He died of smoke inhalation through a faulty WWI era gas mask still used by the fire department. 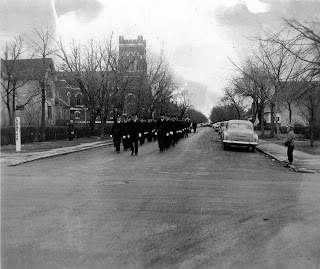 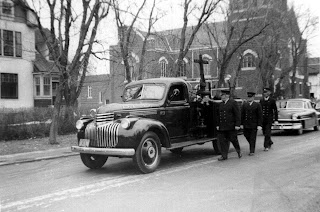 On Friday, April 10, 1953 Brown was laid to rest after a funeral service at First Presbyterian Church in Brandon. In attendance were representatives from the Winnipeg, C.F.B. Shilo, St. Boniface, West Kildonan, St. Vital and Portage la Prairie fire departments. City offices closed to allow all civic employees to attend. 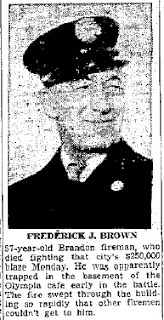 Winnipeg Free Press, April 10, 1953
Brown, the only Brandon firefighter known to have lost his life in a fire, left behind a wife, three sons and three daughters. Back in 2005 - 06 when I originally researched Brown, I could not find him listed on any of the firefighter memorial monuments or websites, including the national Canadian Fallen Fire Fighter Foundation. He was a forgotten man.

I posted about it on eBrandon and after a couple of years of assurances that people were working on getting his name added, it seems that in 2010, 57 years after his passing, will be the year. He now appears on their online honour roll.

The CFFF has been working for years on building a permanent memorial to Canada's fallen firefighters and earlier this year they got some good funding news from the feds.

Update:
Thank you to Brown's family who saw the eBrandon post and contributed these photos of Brown and his funeral. You can read some of their tributes and memories here.

A well written article...but there were 3 sons as well, left to mourn his passing. My husband, Glen, was at the scene and being manager of a propane company, had to remove the tank of propane behind the building. That was when he found out that his Dad was inside and couldn't be found. Dad had gone into the basement to find the source of the fire. The building was on his list for regular inspections and he knew it best. The gas mask he wore was from WW 1
and was faulty.

Good luck on your web site...a refreshing view of a lovely city.

Thank you for posting !

I made the correction to the article about three sons and included the fact that he had died of smoke inhalation.

Your website is very beautiful or Articles. I love it thank you for sharing for everyone. How to Become a Firefighter