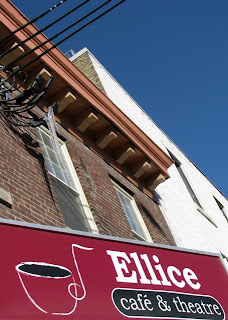 The 25th annual awards were held today at the Ellice Theatre (formerly Mac's Theatre / Cinema 3) on Ellice at Sherbrook. The awards are chosen by a board, this year consisting of: Lee Stecheson (Stecheson Architects); Philip Reynolds M.A.A.; James Jacki (Architect) and Neil Einerson (Province of Manitoba).

And the winners were: 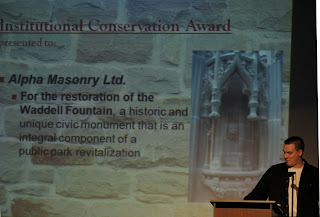 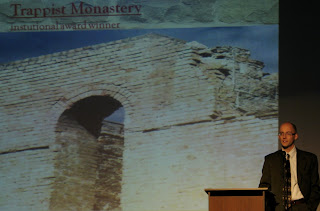 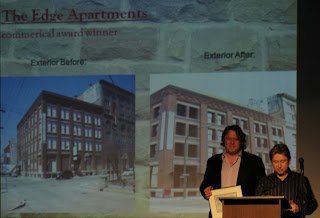 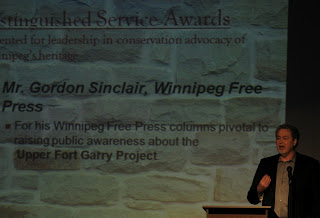 'for his Winnipeg Free Press columns pivotal to raising public awareness about the Upper Fort Garry project'
A few notes from the event ...

Provincial Minister of Culture, Heritage, Tourism and All The Fun Stuff Flor Marcelino showed up, albeit 20 minutes late. This is a departure from her predecessor (Eric Robinson, or was that two before her ?) who seemed to take a pass on these events.

There were two elected reps from Council: Grant Nordman, who is the city's appointee to the Heritage Winnipeg Board and Harvey Smith, the area councillor who accepted the Waddell Fountain award on behalf of the city.

Rounding out the elected crowd was Pat Martin, M.P..

The Hofers were interesting to hear from. Young, energetic and pretty pumped about the downtown and Exchange District. Better yet, they had the oomph and the backing to take on a pretty major renovation project of the former Frost and Wood Warehouse / Cassidy's Building.

Gordon Sinclair Jr. in an emotional acceptance speech spoke of how the supporters of the Gate were an unlikely bunch for him to get behind. He pointed out his grandson in the crowd and said that he wanted him to be there to see that projects like this are about the future, not just about the past.

At the end of February Heritage Winnipeg will launch a new, more user friendly and website, including a Flickr page for their archive of photos. As someone who has a Flickr account and has tried to navigate HW's photo section, I can't wait for this new feature. Following the awards, there was a reception at the Ellice Café then a tour of the West End Cultural Centre.

Well, thanks to their Gord Sinclair award, I will now do everything I can to destroy heritage buildings and their organization, until they apologize for that disgrace and take their award back. They just gave a guy an award for preserving something that doesn't exist, and spending millions in public monies that could have been used to preserve something that does exist.

No holding back now.

I am sure your love of heritage buildings didn't run too deep in the first place. Destroy away, I guess. I don't think the average Winnipegger would blink an eye to a few more building coming down. That'll teach 'em !

I have to (sort of) agree with anon. What kind of credibility do these awards have? Sinclair contributed to the preservation of nothing, and did it with shameful journalism. He didn't raise awareness of the public -- he intentionally mislead the public. That one award makes all the rest meaningless because I can't trust the judgement of the Heritage Winnipeg panel.