This is part 3 of a look back at the life and career of Winnipeg-born singer and actress Deanna Durbin, "Winnipeg's Sweetheart" ! 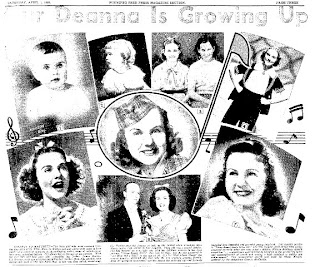 When Deanna's contract with Universal was drawing to a close in 1949 she gave her first interview free from under the thumb of a studio publicist. It was to Associated Press' Hollywood reporter Bob Thomas. In it, she railed against Hollywood and the treatment of child stars, leaving a hint of blame for parents.

What did she really want ? "I would like to have people like me because I am just Edna, not because I am Deanna." As for her 12-year relationship with Universal and the way it ended, she said "I must say, they paid well to make me miserable."

Shortly after that interview Deanna and daughter, Jessica, left for France.

In December 1950, she married french producer / director Charles Henri David, (he directed Durbin's 1945 film Lady on a Train), and the following year they had a son named Paul. She then informed those in Hollywood who were bugging her to return to the studio that after 12 years in show-biz, 21 movies to her credit and dozens of hit records, she was retiring at the age of 28.

As suddenly as Deanna burst onto the Hollywood scene, she left it. 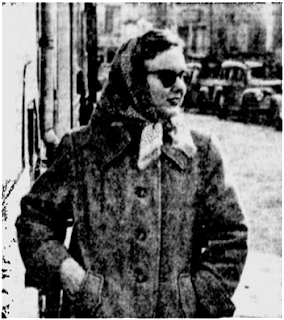 Unlike other stars who "quit" show business, there would be no comebacks, talk show appearances or awards dinners - not even a juicy tell-all book. She remained in Neauple le Chateau, a village outside Paris, and has rarely even commented publicly.

The few comments that I can find:

- In a 1952 visit to Hollywood to see her parents she spoke again to Thomas saying "I can't seem to make people believe that I don't care about making any more pictures".

- In a 1958 refusal of an interview request she wrote an AP reporter to say that she was happy with her life and considered herself lucky to have been able to leave Hollywood on her own terms and relatively undamaged. She declared "Deanna Durbin was dead and my own life really began".

- In 1961, Bob Thomas again caught up with her on a return visit. She reiterated that she was still retired and would remain that way.

- In 1964, American reporter Nino Lo Bello reached Durbin by phone and they spoke for a few minutes. She told him "We live quietly and entertain few friends. Yes, I still sing once in a while at home".

- Durbin's one and only official, sit-down interview since moving to France was with David Shipman in 1983. A transcript can be found here.

In it, she breaks a few myths, most notably that she "hated" show business. She didn't but: "What I did find difficult was that this acquired maturity had to be hidden under the childlike personality my films and publicity projected on me”.

Deanna also provided some additional biographical information about her father. She said that the cold Winnipeg winters ate up any of the savings they made over the summer and that's why they decided to move. In Los Angeles her father "worked as a welder and held a variety of manual jobs" until he started becoming ill. He then managed her affairs up until her first marriage in 1941.

Stories about Deanna were a bit more common. Every few years it was reported that she was coming out of retirement. A 1972 AP wire story carried by the Free Press tells of 20 reporters showing up in Neauple le Chateau after a Paris magazine claimed they had a scoop on her comeback. (Durbin says that she was only seriously tempted once, for the lead in the original Broadway production of My Fair Lady.)

Upon the death of Judy Garland in 1969, Bob Thomas contrasted the two women who began their film careers together with that 11 minute short at MGM in 1936. (The article was carried by the Free Press in June 26, 1969 under the headline Deanna and Judy: A study in contrasts.) His summation: Deanna was able to see the problems and quit whereas Garland couldn't do either and it destroyed her.

In 1999 Deanna's third husband died. Later that year she wrote a letter to the membership of the Deanna Durbin Society apologizing for having to cut back on the amount of fan mail that she was responding to. To close off some Winnipeg connections...

By the time Deanna left Hollywood, her grandmother had passed away and some of the Reads of St. Vital had moved to L.A. to live near the Durbins. There was little local connection left.

Winnipeg media, (the Free Press, anyway), carried some of the above wire stories and any brief, local mention of Deanna still referred to her, erroneously, as the "girl from St. Vital".


"The smile was always real and the blue eyes could make you feel alone in a theatre. When the clear voice of Winnipeg-born Deanna Durbin told you she loved you it made your adolescence livable for 90 minutes."

Basinger, in The Star Machine (p 296), says Durbin had close to the perfect Hollywood movie career: bursting onto the scene, taking it by storm, then walking away. (The Garbo reference points out that despite her famous 'retirement' from the movies, she spent the rest of her life in and out of the Hollywood scene.)


"Deanna Durbin, that most open and radiant of movie stars, remains more enigmatic than Garbo. She retired and led a normal life, the one thing that seems to have eluded almost every other movie star. She’s the winner and still champ.”

"…Durbin’s retirement was such a mystery her persona remained an illusion….Both Durbin and Garbo would remain eternally youthful in the minds and memory of fans and critics alike. In some ways, this would be reason for her present day popularity." So, just how big was Deanna Durbin ?

In the many articles and biographies that I have read while putting this together I have come across an interesting list of Deanna's achievements. Here are some of them:

- She was given the key to New York City by Mayor Laguardia and is the only female boy scout in America ! (Basinger)

- Her hand and foot prints are in the pavement outside Grauman's Chinese Theatre, Hollywood.

- She was a favourite of Winston Churchill who often watched her films, even during the height of the war.

- In Anne Frank's bedroom in the secret annex where her family hid there is one (some say two) photos of Deanna on the wall above her bed.

- Strangest of all, in 1941 Benito Mussolini wrote an open letter to Deanna in an Italian newspaper asking her to convince the U.S. President not to get involved in World War II.

Notes:
The site that houses the Winnipeg Tribune articles tends to go offline a lot so check back if you get an error message. I have provided images of some of the key articles.

Durbin, or at least her P.R. team at Universal, wrote a syndicated series about Deanna's life. It appeared in the Winnipeg Tribune, (part 1, part 2).

Check YouTube for hundreds of movie and audio clips.

A sample of some of audio recordings from the 1940s.

I often watch youtube.com to hear Deanna's glorious voice. I wonder does she ever watch any of her clips? What does she think of modern inventions? It would be very interesting to know how she feels about the world.

Yes, it would be nice to know !

I wonder if knowing that typing her name would instantly bring up thousands of photos, songs, movie clips etc. would be comforting or eerie ! There's got to be as much stuff floating around out there now than there was at the peak of her career !