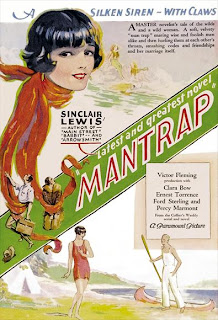 In summer 1924 the noted American author (and future Nobel winner) Sinclair Lewis came to Manitoba to "regain his mental poise" after writing of a string of popular novels such as Main Street and Babbitt. Some media took that to mean that he suffered a nervous breakdown, one even reported that he had become an invalid, but his numerous appearances around Winnipeg proved the rumours incorrect.

Lewis and his brother Claude arrived in Winnipeg on June 6, 1924 and spent three days at the Royal Alexandra Hotel. While there he gave an interview to the Free Press saying that his intention was to get away to the wilderness. As a native of Sauk Center, Minneapolis, a town north-west of Minneapolis, the outdoors were no stranger to him.

Winnipeg Free Press, May 29, 1924
While in the city Lewis spoke at a Kiwanis luncheon at the Hotel Fort Garry, visited the General Hospital, got a tour of the Tuxedo Barracks and heard the PPCLI band play. He had a tour of the Legislature that was cut short when he was overhead saying to his guide that 'all buildings looked alike' to him. On his final day in the city he visited Stony Mountain penitentiary (no word if he met with inmates but he did spend 'several hours' there).

It was then off to The Pas by train where he met up with the federal government's Treaty Party Number 10 which was touring central Manitoba and Saskatchewan by canoe. Stops included Lac La Ronge and Prince Albert, a nearly 3,000 km journey !

On July 26, 1924 the Lewis' arrived back in Winnipeg and after a quiet weekend stay set off home to Minnesota. 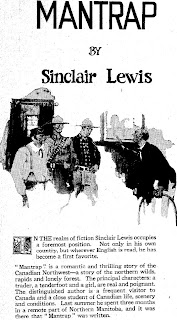 Promo for Canadian release of the novel, July 1926
The following year Sinclair Lewis released the novel Mantrap inspired by his wilderness adventure.

The story is set near the fictional northern Canadian village of Mantrap, (that place name actually exists but in rural Minnesota). Most publicity material of the day said that the setting was Northern Manitoba, though some later writings say that it's based in La Ronge Saskatchewan.

The story is that of a burned out New York City divorce lawyer who goes on vacation to the Canadian wilderness to find some peace. On his travels he meets and falls for a lovely woman who was once a 'big city girl' but is now married to a trapper who is happy with bush life. What will our big city boy do ? Which man would she choose ?

Released in the U.S. in 1925 and Canada in 1926 the book was a hit. Paramount bought the rights and wanted to cash in on them right away as Lewis novels did well at the box office. 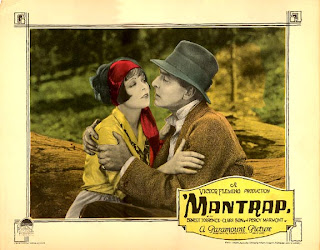 The movie, also named Mantrap, brought together director Victor Fleming with actors Clara Bow, Ernest Torrence (as the trader) and Percy Marmont (as the trapper).

Clara Bow was one of Hollywood's hottest actors at the time. She was the quintessential 'flapper girl' of 1920s on-screen and off. Wild, fun, sexy and sporting a short bob and skirts. As the 20s went on her party-girl roles became more demanding and Mantrap was considered a 'transition piece' to meatier parts.

The film was shot in California, though Canadian Literary Landmarks says that cinematographer James Wong Howe did come to Manitoba to shoot some footage. 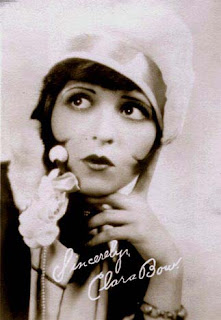 Many involved with Mantrap went on to do great things.

Sinclair Lewis won the 1926 Pulitzer Prize (which he turned down) for Arrowsmith. He was awarded the Nobel Prize for Literature in 1930, a first for an American author.

In 1927 Clara Bow starred in "It" and the term "The It Girl" would forever be her trademark phrase. Mantrap did prove a stepping stone to more serious work as she landed the lead female role in Wings (1927) which won the first-ever Oscar for Outstanding Picture. Sadly, Bow's career came to a halt the day the stock market crashed in 1929. The happy, flirty, flapper image that she and her studio carefully cultivated through the 1920s was immediately deemed passé and even vulgar.

Fleming went on to direct a number of Hollywood classics including The Wizard of Oz and Gone with the Wind. For the latter he won the Academy Award for Best Director.