Most of this post was written in October 2010, it sort of got stuck in my draft folder (just in case you're wondering why the boats aren't under about five feet of water !) Those two rusting boats tucked away on the north east side of the Louise Bridge. I've passed them hundreds of time over the years and every time I've glanced out at them and wondered what their story was. This autumn I thought I would finally check them out. There are two boats, the most interesting is the covered one. It has a cabin with a big winch at the front and motor at the rear. On the engine casing there is a tag for "Russel Brothers Limited, Owen Sound Ontario". The second boat is similar to the first but open. The condition of the interior was pretty rough so I wasn't able to see anything that would identify it.

I found that Russel Brothers Limited isn't around anymore but there is, of course, a fan / corporate archives site based in Owen Sound with records dating back to the early 1900s.

Russel Brothers was established in Fort Frances Ontario in 1907 and moved to Owen Sound in 1937, (which narrowed down my boat search). The core of Russel Brothers' work were 'workhorse' boats. Steel hulled tugs, logging boats, winch boats, fire fighters and ice breakers.

Four of their boats are Canadian icons. The Ancaster and Missinaibi appeared on the back of the Canadian dollar note from 1974 until its discontinuation in 1989. The two "Maid in the Mist" vessels of Niagara Falls fame are Russel Brothers'. All four boats have survived. The first pair are on displays in museums, the two Maids are still in service in Ontario and on the Amazon River. 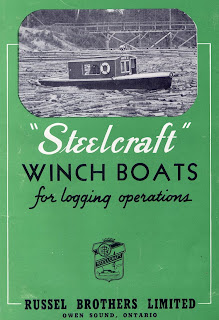 Checking through their records I could not find a match to any of the numbers that I got off of the motor plate but I saw the above manual and thought that this really must be it ! A few emails back and forth with a couple of Russel brother archivists and a couple of return trips to the site to crawl in, around and under her looking for a hull number and voila ! This welded '617' is what we needed to trace the boat's owners. Unfortunately I could not find a similar marking on the open boat.

From this number they were able to confirm that the boat was indeed a Steelcraft Winch Boat. They were built for the logging industry to tow shipments of lumber to their destination. (To see how a winch boat works).

This boat was built in Owen Sound in 1946 and sold to Manitoba Power (presumably that's the Manitoba Power Commission). After that it appears in the Canadian List of Shipping on a few occasions: in 1956 as the steel tug 'Pinawa' owned by Manitoba Paper Co. Ltd; in 1970 again as the 'Pinawa'; in 1997 and 2003 as owned by Abitibi Price (who owned Pine Falls Paper Mill at the time). In 2004 the boat was no longer on the registry.

That final ownership year of 2003 struck me as odd. I'm sure they've been there long before that time. Perhaps they were out of service before that and it just takes time to get struck from the registry ? Boats are to the left of the two blue squares sticking out of the water.

The next question is why there, at the foot of the Louise ?

At one time Brown and Rutherford had a small fleet of boats that they used to bring lumber to their factory on the other side of the river but they were long gone by the time these boats would have come down to Winnipeg.

In the mid 1960s the site immediately east of the boats was the dock for the Paddlewheel Queen then, from the late 60s to late 80s, the River Rouge. The pilings under the Louise Bridge do collect a lot of debris after the spring melt. Maybe they were once used to help haul items that could have caused damage to the ship(s) and were left behind when the Paddlewheel or River Rouge moved on ?

Newspaper and other searches have brought me no further along. If you have any additional information please let me know !

Related:
A History of the Lumber Industry in MB Province of Manitoba
Remembering the Riverboats MB Historical Society

Very interesting, and a fun day!
ps-can you make your articles shareable to facebook via the "like" function?

Thanks !
I'll look into the like thing. I'm sure that there's a gadget for that around here somewhere.

Really cool post. I didn't know those boats were there. Will definitely take a closer look next time I'm in the area.

Thanks for digging for the info. What a great example of the value local bloggers add.

I recall these 2 boats being closer to the bridge back in the mid '70's. I have always loved old boats so was intrigued by them at the time. I have a painting I received as a gift that includes the two boats and the bridge together. This painting shows them as they were shortly after being hauled up onshore.