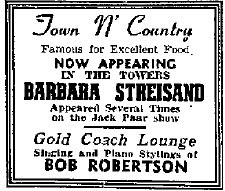 On July 3, 1961 a 19 year old singer named Barbra Streisand began a two week stint at Winnipeg's The Towers night club in the Town N Country Restaurant for a fee of $350. per week. (The year previous she dropped an 'a' from her first name so the above advert is misspelled.)

The Towers was an upscale, 300 seat supper club at 317 Kennedy Street. These clubs were the new trend on the local entertainment scene in the late 50's. The Copacabana, Pierre’s, Chan’s Moon Room Cabaret, Rae and Jerry’s Scarlet Lounge, Club Morocco, The Paddock and the Constellation Room were some of the others. The Towers and Rancho Don Carlo appear to have been the largest.

To fill their stages, the clubs relied on a circuit of mid-level and up-and-coming U.S. entertainers which is how Streisand, who had a Chicago-based agent, ended up here.

Streisand played to critical acclaim but her avant-guard style was new to Winnipeggers.

Gene Telpner, in a favourable Free Press review, said "Miss Streisand is the type of singer you'd expect to find in the Blue Angel or San Francisco's hungry i. That's why Winnipeggers may find her rather strange."

The audience watched quietly, some say it’s because they didn’t 'get' her but others said that they were silenced by her amazing voice. Streisand in her first tv interview in 1961
If Winnipeggers didn't get Streisand, the feeling was mutual.

Her very first television interview was on the Tonight Show later that year and she spoke of the Winnipeg gig saying that she liked it but that the audience was very casual:

"I worked in Winnipeg. This was a beautiful nightclub, very posh, except the people wore short shirt sleeves. They didn't wear ties to come to the nightclub" 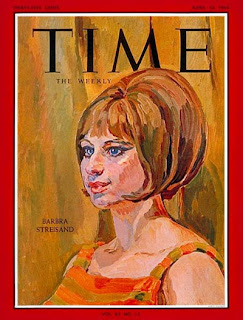 TIME, April 10, 1964
The following year Streisand appeared in a run of the Broadway musical "I Can Get it For You Wholesale." She was immediately noticed and a star was born. In 1963 she released her first album and in April 1964, while starring in the musical Funny Girl, she made the cover of TIME magazine.

It took 45 years until she performed again in Canada. She played Montreal, then Toronto in 2006.

Local lore says that Streisand was 'fired' by T & C co-owner Auby Galpern and told that she would never make it as a cabaret singer. That has recently been disputed by a couple of former senior T & C staffers who say that she was released early at the request of her agent to return to the U.S. for work.

In an April 23, 1964 Gene Telpner column, Galpern said of Streisand "I liked her but I thought she dressed very strangely" (she bought her wardrobe at rummage sales to give her an eclectic look). 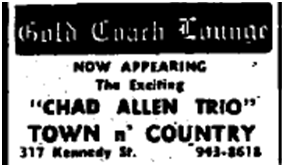 As for the supper club phenomenon, as other cities around Winnipeg grew in size and status, that old Chicago / Minneapolis / Winnipeg entertainment circuit that had been around since the days of vaudeville began to disappear.

By the mid 1960s clubs relied more on local talent to fill stages and that favoured a new crop of up-and-coming locals including Lenny Breau, The Squires (Neil Young's band) and Chad Allen and the Reflections (later renamed The Guess Who).

By the late 1960s supper clubs gave way to more informal hotel lounges. From old favourites like the Marlborough (with the Golden Crown) and the McLaren (with the Fiesta Room) to the crop of new hotels like the Gordon chain and Viscout Gort, most hotels had a live music lounge. 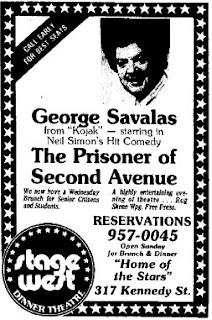 The Towers continued into the early 70s when the Ginakes Brothers, (some of whom went on to open the Pony Corral chain), took it over. It was then renovated into Studio 44, Winnipeg's largest discotheque. In 1981 it was renovated again into the Stage West Dinner Theatre.

The building was torn down in 1985 to make way for the Portage Place development.

For more on Streisand in Winnipeg:

A fan site has a page dedicated to the Winnipeg stint and includes an audio clip of the Tonight Show interview (which is where Streisand's Winnipeg quote above comes from). Also see Babs' big night in the 'Peg for some behind the scenes tidbits.

For more on Winnipeg Music clubs in the 1960s:
Canadian Idols CBC

I was interested in this building, because roughly across the street from where it stood is now the Hostel Royal Plaza. I wonder why Streisand said the bldg. used to have 3 floors, when later as Studio 44 it had only one. Maybe it was already torn down and replaced before 1985, or two storeys were removed in the renovation. The photo I saw of the outside of Studio 44 had only one level.

Are you sure Studio 44 had the same street address?

Here's the photo of Studio 44 (formerly Town & Country Restaurant) owned by Jimmy Ginakes & his brothers. It shows a building on Kennedy St. with only one storey, but a high ceiling, which also can be seen on an indoor photo from 1979, when it was a discotheque (Wpg Tribune archives).

Thanks for the pic. That building was not the same one she played ... it was rebuilt after 1971.

That's the information I needed to clear up this mystery! So, 317 Kennedy Street—before the fire—was probably a standard 3-storey brick building, as Streisand described in her appearance on The Tonight Show with Jack Paar.

Presumably, the new building that replaced it in 1971 kept the same address. In the background of the photo of Studio 44 (that I linked to in my earlier comment) you can actually see the first few letters of "Free Press" at the top of the old Wpg Free Press building on Carlton. The same building today still bears that lettering on the roof, although it now houses Manitoba Health. One could line up that sign by sight today, to pinpoint the exact location of Studio 44 on Kennedy Street.

the town and country was 3 floors.the restaurant was 2nd floor - the club on the third. i was there when this girl showed up on stage dressed in some weird hand me down looking clothing. us guys were seated in an area room to the left of the stage. we started to throw snide comments to her which she quickly resonded to in the same manner. then she started her show. i just about freaked out when i heard her sing. told my pals to shut up and made abeline to sit at the closest table to the stage. her voice was just incredible. she finished her first set and at my invitation came and joined me. i can't remember if she took the drink i offered to buy for her, but i do have a vague memory osome sort of pink drink. we had a great and lengthy conversation. she told me a friend of hers in new york had a song for her. i told her she should quit this place (run by a complete donkey(galpern) and go there cause this circuit was crap. next i heard was her first hit and she was a star. my name yogi

I admit, I have not been on this web page in a long time... however it was another joy to see It is such an important topic and ignored by so many, even professionals. professionals. I thank you to help making people more aware of possible issues.
clubs γκαζι