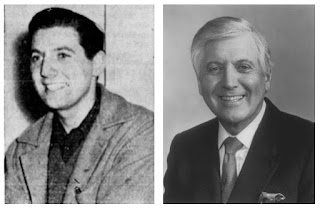 
On August 25, 1921 game show host and television producer Maurice 'Monte' R. Halparin, known to most as Monty Hall, was born in Winnipeg to Rose Rusin and Maurice Halparin.

The Halparins both came to Winnipeg from Russia as young children. Rose was a writer, singer, dancer and teacher. Maurice Sr. was a bookkeeper and entrepreneur, selling meat from a wagon until he could open a small butcher shop in back of a north end delicatessen. Monty's first job was making deliveries for the shop. (In the late 1920s and early 1930s there were four Halparins listed as butchers, so it must have been the family business !)

In 1931 Maurice Sr. opened a meat shop of his own at 1474 Main Street. Soon after, the family, which included sons Monte and Robert, were living at apartment 10B-191 Cathedral Avenue, where they would remain through the 1940s.

In a 1983 interview with the Canadian Jewish News, Robert recalled that his parents, both cultured people, resented having to work in the butcher shop, but the economic realities of the Depression kept them there.  They made up for it by creating "the fanciest kosher butcher shop in town", wearing their best clothes and keeping the store immaculately clean.

Monty attended St. John's High School and became active in local theatre. He saved up to  attend U of M with the hopes of becoming a doctor, but had to drop out in the first year due to a lack of money.

When Max Freed, owner of the clothing store next to Halparin’s butcher shop, learned of this, he offered to fund Hall’s education on four conditions: that he kept good grades; that he paid it all back; that he would do the same for someone else one day; and that Freed’s name remained anonymous. (Hall says the latter was the only condition he did not meet as he 'outed' the late Max Freed in his autobiography.) 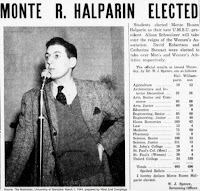 Back at university, Monty enrolled in the faculty of science He has said in later interviews that his dreams of medical school were dashed because the school's quota of the number of Jewish medical students had already been reached. He chose instead to major in chemistry.

Monty became active in the Dramatic Society and a popular emcee and singer at campus musicals, dinners and other events. In 1943 he was Senior Stick for the science faculty and president of the Booster Club. The following year parlayed his popularity into victory as UMSU president.

It was a time when important decisions had to be made about the future development of the U of M, much of it land locked in ageing facilities at its campus across from the Legislature. Plans were being developed that would see the old campus abandoned and, over the course of a couple of decades, the remaining faculties relocated to the Fort Garry Campus, home of the Agricultural College.

Monty agreed with the need for modern facilities, especially laboratories and research space, but did not feel that the Fort Garry site was the best site: “I urgently petition the heads of this institution to give some thoughts towards the election of a completely modern university in the heart of Winnipeg". (Of course, a couple of decades later the U of M’s United College on Portage Avenue would become the independent University of Winnipeg.)

Other items on his agenda was to get student representation on university bodies such as the Senate and to open up the university to the community at large. For the first university open house under his tenure, a day usually reserved for potential students and their parents, he challenged each of them, as well as the current student body, to bring two non-students with them to show them the campus.

Monty's talent as an entertainer made him increasingly popular off campus as well. He worked part-time as a CKRC radio host and emceed many charity and troop shows around Manitoba during and after the war. He also produced, acted and sang in local radio and theatre productions.

When he graduated in 1946 with a BSc in Chemistry and Zoology, Monty began working at the Canadian Wheat Board, but knew that entertainment was meant to be his full time career.

Later that year he was off to Toronto to work for CHUM as a host and manager. When he arrived, it was suggested that he simplify his last name, so he chose Hall. His first name 'Monte' became 'Monty' due to a typographical error on the station's promotional material.

In 1949 he began hosting a radio show called 'Who Am I', which ran until 1959 and could be heard locally on CKRC. His radio work led to television projects on the CBC. First was on a three week summer replacement show called 'Floor Show', which featured Canadian bands in a night club-like setting. His first reguaalr hosting gig was on the 1953-54 show Matinee Party, similar to Floor Show, and filmed at Toronto's Eaton's Auditorium.

Halparin disappeared from the CBC lineup in 1955. In 1959, while back in Winnipeg with his wife and children visiting family, he told Gene Telpner of the Winnipeg Free Press that he was forced to leave Canada when the CBC pulled him from their lineup and offered him no more work. He said that no explanation was given, so he went to New York. "When the CBC cuts you off, you can't just walk across the street because there is nothing across the street."

So, in the summer of 1955 the Halls moved to New York City, though Monty would continue to commute to Toronto to do the weekly 'Who Am I' until 1959. Within a couple of years, he was making a name for himself as a popular live-event emcee, had a TV news show called 'Byline, Monty Hall' and was featured on numerous quiz shows.

He created a production company with the hopes of becoming the behind the scenes talent, but the hosting duties kept on coming. From 1960 - 1962 he got one of his first 'lead host' roles in the CBS game show Video Village. 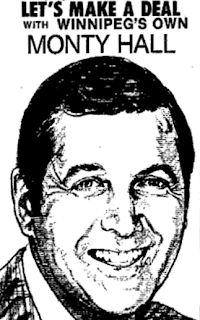 The following year, Let's Make a Deal, which Hall co-created, hosted and produced, hit NBC's daytime lineup. Though critics panned the quirky show, they warmed to Hall. In the late 1960s there was speculation in Hollywood that he could get a late night talk show gig to compete with the likes of Johnny Carson.

Though he was always looking for other projects as a producer, he ended up staying on as host of various incarnations of Let's Make a Deal until 1991 - a whopping 4,700 episodes. 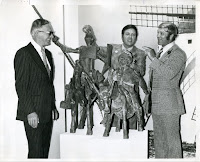 Hall returned to Winnipeg often to visit family and friends. (In this recent Free Press article he says that he made annual visits.)

In 1974 he made an 'official visit' for the city's centennial year. One of the many events he participated in was as host of the opening concert of the 4th annual Folklorama festival. At a luncheon he received a medal from Mayor Steven Juba on behalf of all Winnipeggers for his community service work. In his acceptance speech he spoke of the immigrants of the North End:


"They came here to build the street railways and the roads ... to develop Winnipeg and make it grow ... to make a contribution to the future. And now one immigrant son is presenting the city's highest award to another immigrant son. I think my wife and family now really understand what Winnipeg means to me."
(Winnipeg Free Press, August 14, 1974)

Aside from his television work, Hall is also credited with raising over $800m for Variety Clubs, the Muscular Dystrophy Association and other charities. (His brother Robert, who also changed his last name to Hall, became a lawyer in Toronto and in the 1980s was the international chairman of Variety Clubs International.)

Monte did indeed visit every year. He came into our Talmud Torah classroom in 1970 accompanied by Rabbi Vilenski. We were star-struck as his show ran daily on KCND. It's important to note that his father Maurice operated a Kosher butcher shop. Hall isn't kidding about that quota either.

Thanks for that addition. I was really floored when I read about a quota for Jewish students in med school....seems unbelievable.