Construction and Reno Updates for October !

This is a bit of a carry over from last month's update. A few pics from around town of some positive, new projects.
Downtown Letter Carrier Depot I found nothing on their website about it and when I emailed to find out more I got some curt emails back about seeking information that only stakeholders need to know. The only information they volunteered was that it 'opened last September'. I'm betting that there were some major cost overruns or it's actually a front for CSIS operations ! I wonder if the clean and simple design was inspired in part by John Whitecross' neighbouring No. 1 Fire Hall on Ellen ? I've been watching BG BX, a 24-unit condo development, go up at Wall Street at and St. Matthews Avenue. It's another 5468796 Architect project, a morph between Waterfront's YouCube and Balmoral Street's Centre Village.

It's nice to see new and interesting housing pop up in the West End, especially on the periphery of the once heavy-industrial section. For Avenue / Hample Building fans, (the Havenue, the Avemple ?!), the wait is almost over. The Avenue has a new website, a display suite and is accepting applications for rental for the first 60 units ! The Hample portion will open in 2013. 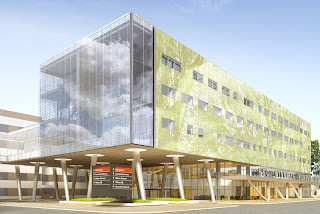 The foundation work is underway for the new 300,000 sq ft, $239-million Women's Hospital on the site of the old Weston Bakery on Elgin Avenue. It will open in 2014. Another photo update of the Makoonsag Childcare and Intergenerational Learning Centre that will open in March 2012 on Selkirk Avenue. 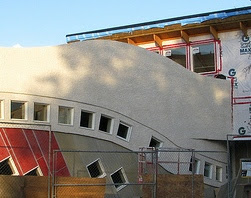 There may be a double Selkirk connection - I was struck at the resemblance between it and the poor old MS Lord Selkirk II ! This is Neeginan Housing Complex phase II on Higgins Avenue. It will contain fifteen townhouses geared at low income, Aboriginal families. This and the neighbouring 28 apartment unit phase I opened last year represents some good housing news in an area not known for new housing starts.
Residences on York The Residences on York, actually located on Smith Street, parkade project is coming along. Thankfully, the project appears to include a redo of the exterior of the main floor which had taken on an ominous, abandoned-building look.
Related:
Construction and Reno Updates for September
North Kildonan Dizzy with Development
The Axworthy Effect on Portage Avenue
The Convention Centre, past and future

I would add to the list the loft project on Hargrave near Notre Dame which appears to be back in progress after being idle for perhaps 2 years?

Re. the Residences on York, looks good except I wish they could have done a better job with the parkade they are building at the corner of Donald and York. Sure it is better than a surface parking lot but it could have been so much more.