Source: Manitoba Historical Maps
A couple of decades-in-the-making projects have created a whirlwind of development activity in North Kildonan not seen since the 1970s.
For the past thirty years, aside from the addition of single-family homes along the south side of Springfield Road and in the north east, noticeable development in N.K. has usually been limited to the McDonald's at Whellams Lane which gets torn down every few years and rebuilt in the latest McDesign. That's the way it has been in North Kildonan since its inception in 1925. In fact, it broke away from the R.M. of East Kildonan over the issue of development, choosing instead to retain its rural, agricultural ways. (For more on the history of the R.M. of North Kildonan.)

Despite this aversion to development, N.K. couldn't keep the lid on the post-war population boom. Through the 1950s its population more than doubled, from 3,200 to over 7,000. New schools had to be built and the demand for better housing options tipped their hand. In the late 1950s its largest subdivision, Silver Heights, came into being. Not long after, River East Collegiate came along. 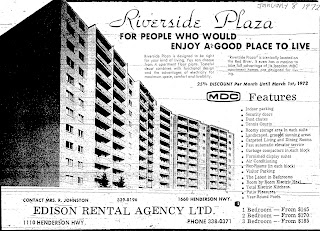 January 8, 1972 (source)
The only time in its history that North Kildonan saw a biggerconstruction frenzy was between 1970-72, in preparation for the R.M. of North Kildonan joining the "Unicity" of Winnipeg. Those three years saw the transformation from a sleepy rural community into, well, a slightly less sleepy suburb. 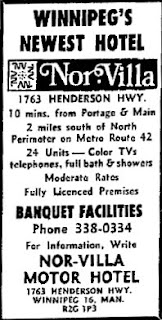 In that time dozens of new projects were built, not to mention the related infrastructure work required to support it. Here are just a few examples: Donwood School; a 65 townhouse development between Springfield Road and Donwood along Raleigh; Riverside Plaza at 1660 Henderson (plus other Edison Development apartment blocks along Henderson and a newly-created Valhalla Drive); the Nor-Villa Motor Hotel and the above mentioned River East Plaza !

Here are someo f the big N.K. Developments of late:

The most noticeable and expensive of the developments has been the Chief Peguis Trail Extension which has turned that empty, lazy stretch of land along Douglas Avenue into a Berlin Wall between north-North Kildonan and south-North Kildonan.

This "inner ring road" has been on the books since the 1968 Winnipeg Area Transportation Study (WATS). In 1990 the first stage, which included the Kildonan Settlers Bridge, was built and it was just a matter of time before the rest fell into place. 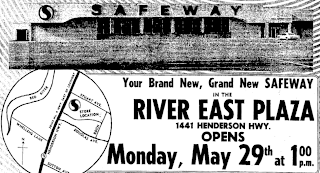 Source: Development plan submitted to City of Winnipeg, 2010
The other project of note is the redevelopment of River East Plaza.

The original 'mall' opened in May 1971 with a Kmart and Safeway as anchor tenants and was the 'retail mecca' for the area. Sure, there was the circa 1961 Springfield Heights Shopping Centre on Rothesay and the circa 1980 McIvor Mall further up Henderson but for the big supermarket and an actual department store, River East Plaza was it !

Though many of the smaller tenants, Arnold's Card shop, a hairdresser and a dry cleaner, began vacating in the 1980's in preparation for changes to the mall, nothing ever happened. The CIBC moved from the mall to a stand-alone location in the parking lot just five or so years ago. The Zellers' lease was not renewed and closed in fall 2010 and that left Safeway as the only tenant. 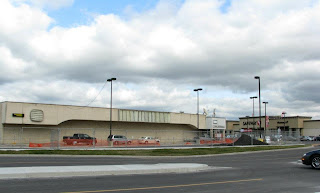 In summer 2010 Safeway applied to have the land divided into six lots, three fronting Henderson and three fronting Donwood. They then began construction of a 50,000 square foot store on the largest lot. That store is now open allowing for the rest of the mall to be torn down. A Boston Pizza is on the way ! (To see more of the plan for the land)

Great post. Old girlfriend lived in 1700 block on Henderson in the 80's & I well remember the Nor-Villa for a host of bizarre reasons. A strange place unto itself, its clientele spoke volumes about how a nascent suburban youth culture in Winnipeg (removed from outside influences) tried to define & mark its territory as distinct from that being laid out by people in Transcona, Pembina Hwy, etc.

Ah, memories. Great post, just one question. The Peguis Trail plans call for crossings at Rothesay and Gateway in addition to Henderson & Lag., are they not being built now?

I've added some more pics as of today. Tarmac on the trail and Safeway almost gone !

@ Expat - I've captioned the pic of the Rothesay overpass in the updated post. It is apparently a few weeks behind schedule and will open in November. The Lagimodiere one looks almost ready to go. Not sure about Gateway.

They still have to install the sound berms so I don't think it will open until that is all done.