The Logan Avenue building that burned to the ground yesterday was the Jermyn Building. Here is a brief look back ..... 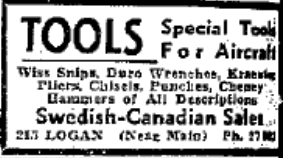 The longest lasting tenant was Swedish Canadian Sales, who opened in 1941 taking up the entire main floor. The specialty tools retailer expanded to other cities in Western Canada and relocated to larger premises in 1960.

The Jermyn then became home to a string of short term, discount retailers including Utility Thrift Shop, and The Clothing Exchange. The last retailer to advertise that address was Freed's Army Surplus from 1969 to the mid 1970s. When the building was razed by fire on October 25, 2011 it was owned by Mitchell Fabrics.

Oh no! That quite likely means the comment I read on one of the news sites was correct and that it was indeed full of vintage 50's-80's fabrics!!! ARGHHHHHHHHHH!

You mean Mitchell's basement of vintage fabrics isn't enough for you ?!