Who had the lable longer: Budweiser or Standard Lager?

This is one in a series of posts exploring the truth behind local history urban myths!

Most Manitoba beer drinkers have noticed the striking similarity between the beer bottle labels for Anheuser-Busch's Budweiser and Molson's Standard Lager, but which came first?

I find that many people think it was Standard, but after some digging I found out that Budweiser's 'script' label precedes it by some 40 years ! Despite this, the two brewing giants have been in and out of court fighting about their respective labels since 1980 and there's likely more to come.

Here's a look back at the Manitoba history of the two iconic beer brands.

St. Louis-based Anheuser-Busch introduced its Budweiser brand lager in 1876 and trademarked its 'script' beer bottle label in the U.S. in February 1886. The first ads selling Budweiser in Manitoba appeared in local papers in 1893 with the Hudson's Bay Company as its local distributor.

Manitobans voted in favour of prohibition in 1916 and the legal sale of alcohol in the province ceased. When it resumed in 1924 Budweiser did not return to shelves due to restrictions on imported beer.

As for Standard Lager, in 1877 Edward L. Drewry took over the old Redwood Brewery on the bank of the Red River at what is now Redwood Avenue. Drewry's had numerous brands on the go at any one time, but the basic three in the 1910s were Redwood Lager, Drewry's Extra Stout and Drewry's Old Ale.

The brewery survived the prohibition years by manufacturing soft drinks such as ginger ale and selling distilled water. Just before before beer sales resumed in 1924, E. L. Drewry sold off his share of the business, though the company kept his name.

Drewry's post-prohibition lineup included the return of its Old Ale and Extra Stout brands along with something called "American Style Beer". 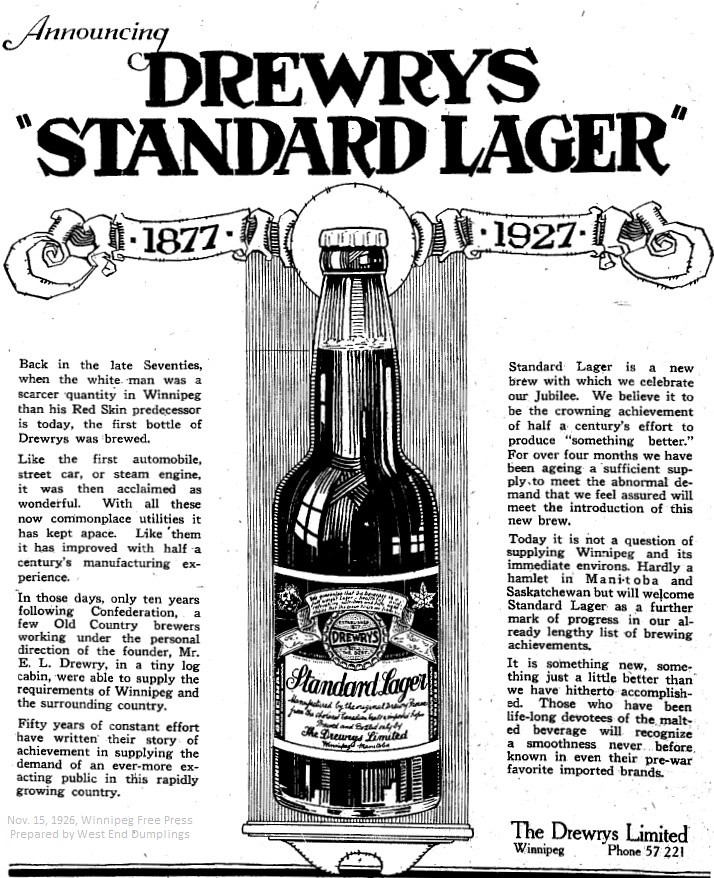 In November 1926, Drewry's introduced a new brand to the market called Standard Lager to celebrate its 50th anniversary which took place the following year.

Standard's script bottle label was trademarked in Canada in November 1926. It bore a striking resemblance to the label of what had become the U.S.'s top selling beer, but since Budweiser was not sold in Manitoba at the time there was no apparent controversy.

In 1980, Carling O'Keefe was the smallest of Canada's "big three" national brewers along with Molson's and Labatt's. That was also the year that Labatt's signed a deal with Anheuser-Busch to manufacture and sell Budweiser in the Canadian market. After a trial sales period in Alberta it began selling Budweiser in Ontario in April 1981 and soon rolled it out in Quebec.

When asked when Budweiser would arrive in Manitoba, a Labatt's spokesperson told the Free Press that it wouldn't until a legal dispute with Carling O'Keefe over the Standard Lager beer label was settled. 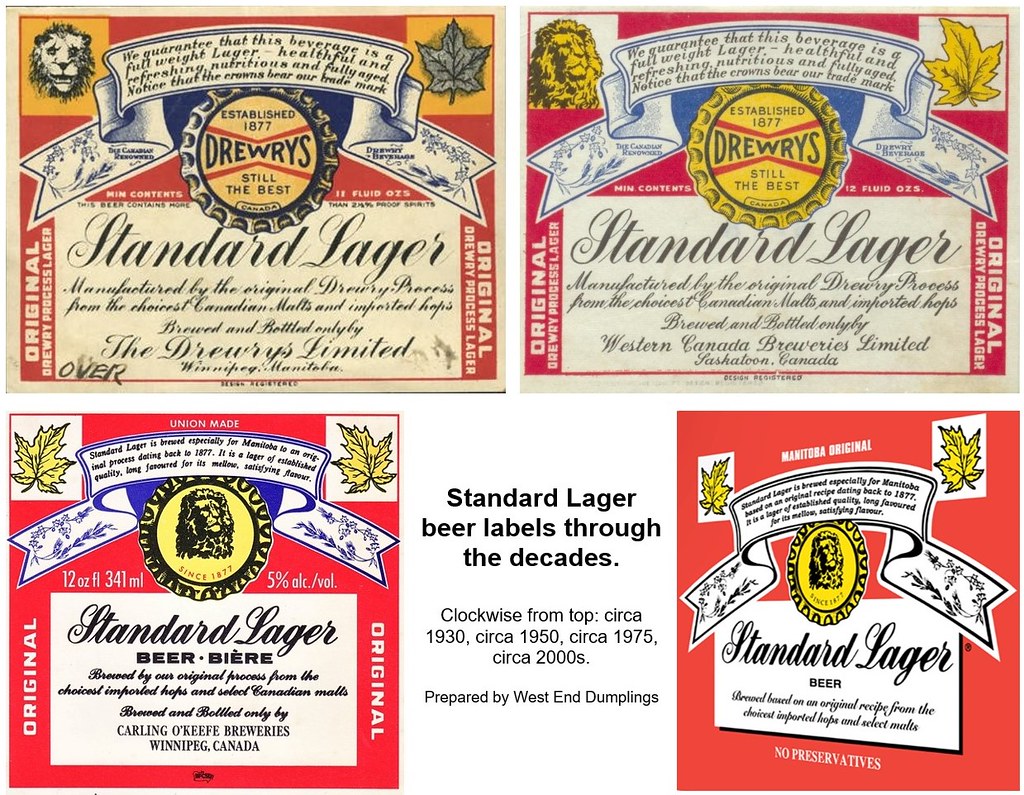 It appears that Carling O'Keefe that initiated the legal proceedings in 1980 against the American brewing giant claiming that its Budweiser label, which was eventually registered as a trademark in Canada around 1970 when the American firm began thinking about a move into Canada, infringed on their Standard Lager label.

The court found that: a. the labels were similar enough in appearance to be confusing; b. Drewry's would have had knowledge of what the Budweiser label looked like when it designed its Standard Lager label; and c. the Standard Lager label likely shouldn't have been registered back in 1926.

Despite this, the court ruled the case a "draw". It said both breweries had legally used their script labels for so long that each was strongly identified with their respective brands and neither would have to stop using it.

Budweiser finally hit the Manitoba market in May 1988.

The legal fighting didn't end with the 1986 ruling.

In 1991, Anheuser-Busch applied for a new trade mark registration to allow it to use the Budweiser script logo on clothing, hats, cups and other promotional items in Canada. Molson's registered its opposition to the Trade Mark Opposition Board (TMOB). In 1995, the board ruled that Molson's opposition be rejected.

In 2001, Anheuser-Busch resubmitted an application to use the Budweiser script logo on clothing and other promotional items in Canada. Again, Molson's objected and in 2008 the TMOB again ruled against Molson's.

The issue ended up back in Federal Court which ruled in 2010 that the TMOB overstepped its bounds and should not have rejected Molson's opposition. (For more on the TMOB situation see: Trade Mark Blog and Robic.ca.)

The legal battle between the Standard Lager and Budweiser brands is likely not over.

It is interesting to see the amount of time and money that has been spent over the decades defending a small, regional beer brand's label. Perhaps the fact that Standard Lager provides its owners with a sharp stick with which to poke one of its largest competitors from time to time is the reason the brand has remained alive to this day.

Molson's did not respond to a request asking for information about its Standard Lager brand.

As the 1980s legal action was winding its way through the courts the sales of Standard Lager dropped off drastically.

Carling O'Keefe had arranged to brew Miller beer under license for the Canadian market starting in the summer of 1983. Thanks to an unusually hot summer and better than expected demand for Miller, its Winnipeg brewery had to add weekend shifts and curtail the production of some of its own brands. Production of Standard Lager ceased altogether for a few weeks until the brewery got caught up.

When summer was over, the brewery was afraid it may have lost some of its 'traditional beer' drinkers, so they applied to the Public Utilities Board (!) and received permission to reduce the price of Standard Lager six pack by 50 cents down to $3.50 and a case of twelve by $1.00 down to $6.70.