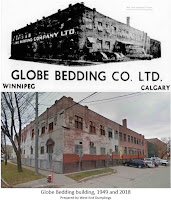 The warehouse at 274 Dufferin Avenue destroyed by fire early this morning was long-time home to the Globe Bedding Company, creators of the Serta brand mattress.

Globe Bedding Co. was founded in Winnipeg in 1913 by W. Keller and Moses Nathanson in rented premises on King Street at Dufferin. After that building burned to the ground in April 1918, they hired architect Max Blankstein to design a new headquarters on Jarvis Avenue at Schultz Street.

Business was good as the company began selling its Restesy brand mattresses, as well as comforters and pillows, across Western Canada and was making inroads into the eastern market. In 1928, they bought out the Sprung Bedding Company of Calgary. 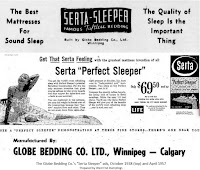 Globe opened a “palatial expansion” to its headquarters in October 1926. Built by Victor Rubin, the two storey, brick extension measured 132 feet wide by 62 feet deep and Globe now took up most of the block.

The Serta line of mattress, including the "Serta Perfect Sleeper", was introduced ca. 1938 and within a couple of decades was a recognized brand across North America.

In the 1960s, Globe was sold into a consortium of local furniture manufacturers. It appears to have maintained a presence in the Jarvis Avenue building until at least the late 1960s