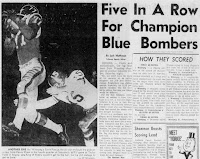 The Bombers were two-time defending Grey Cup champions, so there were lots of expectations for the team. Coached by Bud Grant and led by quarterback Kenny Ploen, the trio of Carver Shannon, Ernie Pitts and Gerry James jostled each other atop the western division's scoring standings.

The Bombers had outscored their opponents 141 - 65 in their first four games. This included a 50 - 7 beat down of the Stampeders at the inaugural game at McMahon Stadium.

The fifth game was against the Roughriders in Regina on Saturday, August 27th. Fans with $17.50 burning a hole in their pocket could get a round trip bus ride and ticket to the game thanks to a promotion run by the Otterburne Sports Club. If not, CKY radio had a play by play of the game later that evening.

In the first quarter Leo Lewis opened the scoring for the Bombers with a touchdown followed just a couple of minutes later by one from Pitts. By the end of the first quarter they were up 13 - 0. Jack Matheson wrote that at this point the team "had rarely looked so devastating".

Saskatchewan tried to fight back but were stymied by the Bombers' defence. Two more Bomber touchdowns in the fourth quarter completed the 27 - 0 romp.

The Bombers went on to win five more games in a row for a 10 - 0 record and finished the season atop the western standings at 14 - 2. The playoffs were a best of three series against the Edmonton Eskimos in November. They Bombers lost and Edmonton went on to lose the Grey Cup to the Ottawa Rough Riders. 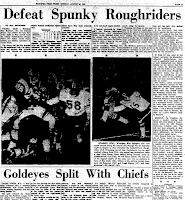