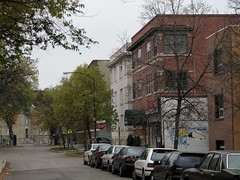 From 1997 - 2007 I lived in the heart of West Broadway at Young and Balmoral. It wasn’t the best of times for the neighbourhood but not the worst of times, either. It had hit 'rock bottom' a year or two before I moved in and by this time most of the more notorious gang sites or houses had been burned out or boarded up.

From the time I moved in the expression I kept hearing was "Murder’s Half Acre.” Which prompted some to ask me "how could you live there !? You really expect me to come visit you there !?" 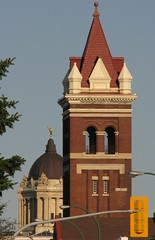 I tried to convince people that it was actually a fairly quiet area. I volunteered with a couple of neighbourhood programs, including the first Citizens on Patrol, so I got to know the place and some of the 'old timers' pretty well. There were some sad and maddening stories about recent crime: domestics; garbage bin fires; gang issues and fights; beatings and beer robberies in the Sherbrook Inn's parking lot. Rarely, though, did murder ever come up.

Still, West Broadway seemed to be stained with the term that has followed it through to this day. The number of murders that people think it involved range from five to twelve and the years they took place seem to blur as well: 1990 ? 1999 ? 2002 ?

Though I tried to call bullshit on the expression I couldn't prove it as this was before the days of blogging and online newspaper archives. So here, a decade late, is the busted urban myth about West Broadway as 'Murder’s Half Acre'.

The first use of the expression I could find was in a front page headline in the Winnipeg Free Press on December 13, 1996. Yes, 1996. The year Donovan Bailey became the fastest man in the world, the Jets played their last season, and Braveheart won the Oscar for best picture.

The headline covered a pair of stories by reporter Doug Nairne. One was about the Winnipeg Police Department's plan to add 20 officers, including foot patrols, to the “Spence-Young-Furby-Langside region” for a time to deal with escalating crime. (In 1997 parts of the cleanup were dubbed “Operation Clean Sweep”).

The reason for the deployment was found in the second story. Daniel Stuart Yetman was murdered in a rooming house after a dispute over whether or not he could stay the night. An argument ensued. He lost and became the 27th homicide victim of the year. The house was at 489 Spence Street near the University of Winnipeg.
Nairne never actually used the expression “Murder’s Half Acre” but did state that “In an area of two blocks there were six murders and 100 knife-related crimes in one year”. That simply was not true.

The accompanying map on the front page of the Free Press, (each dot indicates a 1996 murder in the 'zone'), show that there were six murders all right, but certainly not in a two block radius. They stretched from south of Cumberland Avenue down to south of Broadway and across six different streets.
For the sake of argument, how big is a half-acre? Well, it’s 0.002 square kilometres or 21,780 square feet. To get an idea of what that would look like, take the map and imagine four residential lots, (each 50 feet wide, 100 feet deep), and toss in the back lane.
I found the exact address of two-thirds of the murders that year and noticed another interesting point. In less time (by July 31) there were at least FOUR murders in East Kildonan (on Moncton, Munroe, Melbourne and Maxwell - not a good year to live on an "M" street), one which included a cannibalization. Another happened just blocks south of the E.K. border on Chalmers.

The stories featured interviews with people and business owners on Ellice at Langside and new programs by the West End BIZ (like We are the World). In fact, none of the coverage had to do with West Broadway. 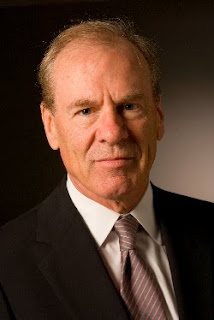 Nicholas Hirst, then editor of the Free Press, got involved. In his column of January 30, 1999 he repeated the Murders Half Acre / West Broadway tie by writing:


West Broadway, which we dubbed Murder's Half-Acre two years ago, has lived down its title. Community action, community policing, small amounts of charitable and public money have gone a long way.

The column was eager to introduce another crime jingle: "...the Fire Zone, the area between Main and Arlington Streets and Matheson and Flora Avenues."
In their Sunday editorial the very next day the error was repeated, along with a condescending congratulations to West Broadway area on 'shedding the shame' of the title (that it never should have had in the first place):

"It is remarkable that in a relatively small city such as Winnipeg there could be one section known by the nickname Murder's Half Acre because of the number of violent crimes committed there....The West Broadway area has begun to shed the shame of being known as Murder's Half Acre because of improvements brought about through better policing, the establishment of community-based organizations and the beginnings of gentrification."
(Jan 31, 1999 Sunday Free Press)

The focus on West Broadway died out in favour of the sexy, new "Fire Zone". The erroneous nickname, though, is repeated for years to come:

- "In the past, (West Broadway) has been dubbed murder's half-acre and gangside, but yesterday the only danger lurking on Langside Street was a potential plunge in the dunk tank." (Kuxhaus July 21, 2003)

- "...the West Broadway was labelled "murder's half-acre" and Winnipeg was known nationally as the homicide and arson capital of Canada. How things have changed." (Rabson Dec 23, 2003) 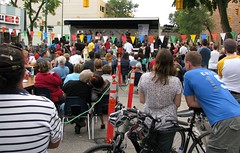 So, West Broadway was never "Murder's Half Acre." It was either a clumsy mistake by a headline writer, repeated enough that reporters and editors at the paper believed it to be true and incorporated it into their stories, OR it was a great slogan that made a catchy headline at a time when the paper was competing with The Winnipeg Sun, an obsessively crime-centred tabloid newspaper.

I know that it's a few years too late and  for some the "fact" that West Broadway was (or still is) Murder's Half Acre is a truism. That's really too bad because the neighbourhood did nothing to deserve it.

I actually really enjoyed living in West Broadway from 2002-04. I also lived at the corner of Young and Balmoral. It was not bad at all, and when I encountered gangs, they would simply walk by me without any problem.

As far as gangs in West Broadway, being hassled can entirely depend on what colour your skin in.

I'm surprised that the same 'branding exercise' didn't stick for parts of the north end — there was a 'Homicide Heights' push for Magnus-Manitoba bet. Main and McGregor back in 2007 if I remember correctly.

@ Rod - we were neighbours ! It was a nice place to live. In ten years the worst that happened to me or my property is I had my car window broken once.

@ Brain. Yup. Clean Sweep ! I guess the WPS' 'operation names" pool is much shallower than, say, the military. If you look back in the post I just added in the clean sweep headline !

@ mike - thanks ! Something about MHS just captured the imagination, I guess. They should have got some branding award for that !

I remember the "Murder's Half Acre" and "Fire Zone" labels that the WFP liked to throw around. What was especially irritating was that they were the ones who perpetuated it, but then disingenuously suggested that they were only reporting what people in the area were saying - as if.

When you hear one person off-handedly say "Murder's Half Acre" and then print that label in every story referencing the area for the next four years, you are the one perpetuating the label. It was the exact same thing with the "Fire zone".

The WFP did this city a grave disservice by tarring those communities with those toxic labels.

I worked at the pharmacy at the corner of Broadway and Young from 1991-1998, delivering prescriptions on bike and foot throughout the "half-acre" to area residents. This label irked me then, and misconceptions of the area irk me still today.