Diana Van Der Vlis was born in Toronto on June 9, 1935, one of two daughters of Adrian and Anne Vandervlis. (She added the spaces to her last name to make it easier to pronounce circa 1956.)

When Van Der Vlis was a child the family moved to Vancouver for a year and then to Winnipeg from 1947 to 1953 due to her father's work as an interior designer and architect for the HBC. He worked at HBC House on Main Street and the family settled at 188 Ferndale Avenue. The girls attended the old Queen Elizabeth School on Kenny Street.

Van Der Vlis' parents sent her to local vocal coach and actress Ethel Lloyd Jones to correct a slight lisp. While the young girl disliked the exercises, she fell in love with the dramatic readings that Lloyd Jones would have her do and performed in recitals and school plays. (Sister Sylvia, meanwhile, took classical music lessons and for a time was a member of the Royal Winnipeg Ballet.)

In October 1950, under Lloyd Jones, a fifteen-year-old Der Vlis won the "B Division" Manitoba Drama League Rose Bowl for her reading of two dramatic works: The Appointment and Pantomime. In May 1951, she was runner-up in the Winnipeg Drama Leagues annual three-day drama festival for best original script. She also acted in one of its performances.

These awards led to a scholarship at the Banff School of Fine Arts in the summer of 1951 where she appeared in their year-end production of Peter Pan.

From there, it was back to Winnipeg where she got parts in Winnipeg Little Theatre's The Man Who Came to Dinner (May 1951), The Philadelphia Story (October 1951) and The Male Animal (Dec 1951). She also did some voice work on local radio.

Van Der Vlis likely attended Wesley Collegiate for high school and lists having studied drama at U of M in her stage biography.

In the summer of 1952, Van Der Vlis was back at Banff. She was offered a third summer scholarship in 1953, but could not take it because she and her mother were in New York to audition for the U. K.'s Royal Academy of Dramatic Art in London. Of two hundred finalists, she was one of ten chosen to attend.

When Van Der Vlis and her mother returned to Canada in 1954 it was to her native Toronto where her father had moved back to. There, she joined the Crest Theatre for the 1955 -56 season.

She tried to get acting gigs with the CBC butt, according to a Maclean's article from 1957, "Nathan Cohen, pungent critic for the CBC observed, 'She can’t act at all. but she’s awfully pretty.'  She got a few parts on CBC radio but was rejected for television." 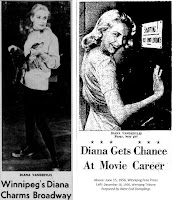 In early summer 1956, Van Der Vlis went to New York to visit theatre friends but after a while got "caught up in the excitement" and began to make the audition rounds. Her first on-screen gig came when NBC casting director Martin Begley, brother of actor Ed Begley Jr., cast her in a live TV commercial on the Red Buttons show.

Van Der Vlis got an agent, Baum - Newborn, and they managed to get her a screen test for Warner Brothers in the summer of 1956 opposite a young Dennis Hopper. The studio didn’t sign her and she later took a three picture deal with an independent studio that appears not to have panned out.

It was while in Hollywood that she met the director of an upcoming Broadway play The Happiest Millionaire starring Canadian Walter Pidgeon who was returning to the stage after two decades in movies. She got the part of his daughter, Cordelia. 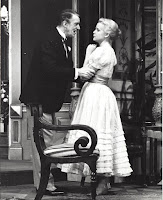 In The Happiest Millionaire

The Happiest Millionaire's pre-Broadway tryout began in early October 1956 with runs in Wilmington, Philadelphia and Washington, D. C. and opened on Broadway at the Lyceum Theatre on November 20, 1956.  It ran for 271 performances until July 13, 1957.

One reviewer said Van Der Vlis was "full of vitality"  and "first rate." In fact, the role earned the 20-year-old a Tony Award nomination for Distinguished Supporting or Featured Dramatic Actress (1956). Her next Broadway role was in the comedy Visit to a Small Planet replacing Sarah Marshall in September 1957. It ran until January 11, 1958. (For a list of her Broadway credits.)

It was truly a Cinderella story, one that even Van Der Vlis had trouble believing. She told a reporter in 1957 that she thought it would take a couple of years for her to start getting such choice parts. 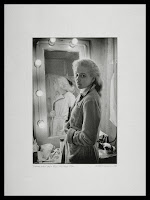 What was it about Diana Van Der Vlis that caused a stir during her first years in New York?

She was tall, good looking and "classy". Some articles said she had an air of Grace Kelly about her. This was helped by her hard to place accent she once described as a "combination of English, American and Canadian."

Van Der Vlis had a commanding stage presence and powerful, deep, throaty voice which she credited to childhood asthma. She admitted that during The Happiest Millionaire she had to be taught to tone her voice down so as not to drown out others on stage with her.

When the question was put to Van Der Vlis in 1957 by syndicated columnist William Glover, she replied: "I think perhaps its a combination of vibe and appearance and an indefinite quality that I'm not aware of."

In 1976, she said in another interview that: "Acting was the first thing that I found that I really enjoyed doing. It was an enormous release for me to be totally free, physically and emotionally free on stage. I had marvelous parents; there weren't any objections from them about my career ambitions." 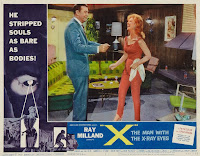 During the 1950s Van Der Vlis also made numerous of television appearances, mostly one-offs on serial dramas. Ironically, some were on the CBC in anthology series such as On Camera and The Unforseen. In a September 1958 interview with syndicated Hollywood reporter Harold Stern, she mentions having shot a TV movie pilot called "You Know Me, Al" 'with Dick York, who would go on to star in Bewitched, but it didn't sell.

Frank Morriss wrote in one of his 1956 Winnipeg Free Press columns: "Now that Vandervlis, former Winnipegger, has been set to play opposite Walter Pidgeon in the play The Happiest Millionaire, Hollywood might take a new interest ...”. It appears that it didn't.

A United Press story from October 1956 reported that David Susskind signed Van Der Vlis to a non-exclusive three-picture deal that would pay her a total of $110,000. He made the offer after seeing her in The Happiest Millionaire in Philadelphia.

While Susskind was active on both sides of the camera during this period, according to IMDb Van Der Vlis has just four movie appearances in her  career. The first, a small role in the 1957 B-movie The Girl in the Black Stockings, then The Man with the X-Ray Eyes (1963). Neither of them appear to have been Susskind films. Her final movie role was in the Richard Burton film Lovespell, (1981). (For her filmography.) 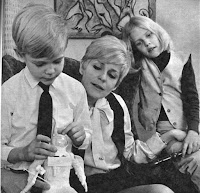 In June 1960, Van Der Vlis married Roger Donald who worked at a publishing house and the couple initially lived in New York. She told a daytime TV magazine that the two first met on the ship to London when she was off to the Royal Academy of Dramatic Art. They met again four years later in San Fransisco where she was appearing in a play and they married soon after.

Later in 1960, Van Der Vlis returned to Toronto to play the lead in Death is a Spanish Dancer, part of CBC's General Motors Theatre drama series. Through the rest of the decade she had numerous guest roles in American TV series such as The Man from U.N.C.L.E and The Fugitive. 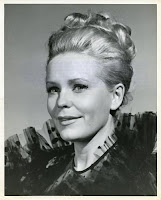 In 1971, Van Der Vlis landed her first role on daytime television when she joined the cast of the CBS soap Opera Where the Heart Is. When the show ended in 1973 she vowed not do do another soap due to the grueling schedule.

By the mid-1970s, Van Der Vlis and her family had moved to Boston where she continued to do stage work. She was part of Noel Coward's Present Laughter starring with Douglas Fairbanks Jr. in Washington D. C. when she got offered another daytime television role.

ABC was creating a new soap called Ryan's Hope and she was cast as Dr. Nell Beaulac who was killed off in the first year. She returned to Ryan's Hope in 1987 playing an entirely new character called Shelley Rowan for two years.

A rural retreat was something very important to Van Der Vlis. It was a throw back to her childhood in Toronto when she spent summers on a farm in Northern Ontario and summers in the Whiteshell when her family lived in Winnipeg.

In 1971, she told a soap opera magazine that it was her dream to live on a ranch in the U.S. Midwest or Australia and raise cattle. At the time, the family had a summer ranch in Claverack on the New York - Massachusetts border.

It appears that Van Der Vlis eventually got her big ranch. In the late 1990s she and her husband divided their time between New York City and Montana.

Diana Van Der Vlis died on October 22, 2001 at Missoula, Montana after a brief illness. She was 66 years old.