The rail from Auschwitz to Auschwitz-Birkenau Extermination Camp

I must say that I am surprised that its is only 20% of Canadian youth who don't know about the Holocaust.
Back in 2013, I went on a Holocaust tour of Europe to see places like the Warsaw Ghetto, Belzec, Treblinka, Josefow, Auschwitz I and II, Neuremberg, etc. in person.
What struck me is how in such a short period of time a basic message of "Make Germany Great Again" and run-of-the-mill prejudice against people who didn't look like "real Germans" caught hold. This, despite the fact that the bogeymen didn't live an ocean away, but were in many cases working and middle class families that lived amongst them, who tended the stores that sold them their bread, who fixed the roads they drove on and who administered treatment when they were sick.
A large segment bought into the narrative and were willing to commit mass murders on a large scale by hand, eventually creating or serving a network of extermination factories to increase the scale. Another large group, I guess numbed by the daily narrative, were complicit in letting it happen and keeping silent.
There was nothing special about Germany in the 1930s. Germans were not evil monsters. Jews weren't their evil overlords that needed to be put down. A small group of people made them both into that and a large group followed along.
Yes, it could happen again.
If you are the parents of youth, who will be voters soon, they need to know about this chapter in our history. Even if its just a Hollywood movie introduction to the subject. Don't play a part in letting recent history repeat itself.

Oh, and in the end, it didn't make Germany great again. 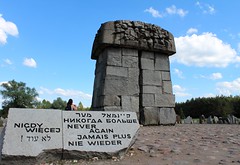 We are the biggest newsgroup in India. Bhaskarhindi