Tragic Endings: In my decade of blogging and other historical research I have come across hundreds of examples of Manitobans who died well before their time. This series is a  collection of stories about some of those lives.

Information about these deaths comes mainly from newspaper stories of the day as, in most cases, inquest documents, court transcripts and investigators' notes are no longer available. This means that the information I will provide will include many of the gaps in coverage, errors in reporting and prejudices of the day.

If you have additional information about any of these stories feel free to contact me at cassidy-at-mts.net

From the outset, news about the murder of six-year-old Rose Eiler was as bizarre as it was shocking.

Stephen Eiler, Rose's father, was an unemployed brick layer living at a rooming house at 243 Young Street. On the evening of January 24, 1939, he was playing cards with the resident owners in their another suite while Rose and her younger sister, Joan, slept in their beds. Also with them was his live-in housekeeper, Kay Rykunyk, 24.

Eiler returned to his suite around 10:30 p.m. to find Rose dead on her bed, a pair of her panties stuffed in her mouth. Rykunyk was bound, gagged and tied to a table. Youngest daughter Joan was unharmed and asleep in her bed.

Initial news stories were based on what police said Rykunyk told them happened that night. A tall man in a long, brown coat with a sallow complexion entered the suite around 9:00 p.m. demanding to see "papers to do with the divorce". When Rykunyk told him she didn't know what he was talking about, she was knocked to the ground, tied up and gagged while the man ransacked the place. She said she was too scared to cry out.

During the commotion, Rose woke up and began crying. The man stuffed a pair of her panties in her mouth to shut her up and bound her hands and feet. He then grabbed some papers and left.

As the the manhunt began, Rykunyk was brought to General Hospital suffering from shock and Mr. Eiler was taken to police headquarters for questioning.

Eiler told detectives that he had received a letter in the mail that day from a man named "Jack Evans" who said he had information that would help in the divorce and that Eiler should meet him at 8:00 p.m. any night that week at the Stock Exchange Hotel. Eiler said he went that night, but there was no man there by that name.

Having already arranged for Rykunyk to watch the children, when Eiler returned to the house he visited with the home's owners and socialized.

Police also questioned the resident owners and other tenants who all said they heard nothing, some expressed surprise considering they were just meters away and awake at the time.

Another character in Rose Eiler's story was the mother, Rose Eiler. According to Manitoba Vital Statistics she and Mr. Eiler were married on June 4, 1932 in Winnipeg. Rose, their first child, arrived January 8, 1933 and Joan the following January.

Mrs. Eiler told a Winnipeg Tribune reporter that they had separated in April 1935 and she initially got custody of the children. She then got sick and spent nine months in hospital. While she was there, a judge granted sole custody to Mr. Eiler in November 1935. Mr. Eiler filed for divorce in November 1938 citing abandonment on her part.

Since her release from hospital Mrs. Eiler had been convalescing at the home of her parents on Trent Avenue in East Kildonan. She said she hadn't seen her children since the summer and did not know the who the mystery man or Jack Evans could be.

What appeared to be the start of a drawn-out investigation and manhunt came to an abrupt end at noon on Thursday, January 26 when police chief George Smith told the press "We've got the man and woman. It's a Greek tragedy".

The two were Stephen Eiler and Kay Rykunyk. They were being held on coroner's warrants until after the coroner's inquest, at which time they would be formally charged. Police provided little additional information other than to say that it was a statement given to them by Rykunyk from her hospital bed that led to the announcement. 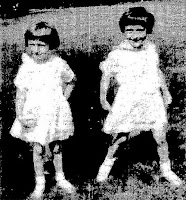 As for Rose Eiler, little was written about her as she had just started her life.

It was said that she and Joan were close as their father moved around a lot for his job and usually to places without other children. She attended Elim Chapel Sunday School off and on. It was four children from that school that acted as her pallbearers.

One of the teachers at the school said that Rose was shy and very close to her father. She had been off school for two weeks earlier the month with tonsillitis and insisted on walking to the school with her father so that she could tell the teacher in person why she had to be away.

Because he was not yet formally charged, Mr. Eiler was free to attend the funeral at Thompson's Funeral Home on Broadway. He did so under police escort for his own safety. He and Mrs. Eiler, who was distraught and sobbed throughout the ceremony, did not acknowledge each other. Kay Rykunyk did not attend.

Both newspapers reported that thousands of people came out to attend the funeral, most had to mill around outside the funeral home.

After the ceremony, Rose was buried in a small white coffin at Brookside Cemetery. 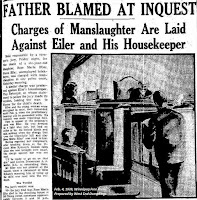 The coroner's inquest took place in early February and heard from fifteen witnesses, including doctors, neighbours and police officers, but it was the testimony of Kay Rykunyk that everyone wanted to hear.

Rykunyk was still feeling the effects of her ordeal. She broke down on the stand to the point that she could not testify. Instead, the statement she gave to police while in hospital was read out.

She said that Stephen Eiler was frustrated that his divorce proceedings were stalled. His lawyer told him the fact that Eiler and Rykunyk had been living together for months at numerous different addresses around the province would make it difficult for him to claim abandonment.

Eiler then came up with a hoax that he felt would speed matters up by making it appear that Mrs. Eiler and her new boyfriend were trying to use strong arm tactics against him.

Eiler got Rykunyk to write the Jack Evans note that was mailed to their address. Before he left to go to the hotel, (hotel staff testified that they had seen him there around 8:00 p.m. asking for a Jack Evans), the two messed up the room to make it look as if the place had been ransacked.

Rykunyk waited for Eiler to return then sneaked him into the house so that the other occupants would not hear him come in. They they returned to his suite, bound and gagged Rose, (Rykunyk said it was Eiler who did both, she just held Rose's feet up as they were being bound - she cried a little, according to Rykunyk). It was then Rykunyk's turn to be bound and gagged.

Eiler then went to the owner's suite to play cards for a while before returning home.

The last sentence of Rykunyk's statement read: "I had no intention of killing Rose Marie and this thing was only done to speed up Steve's divorce."

It was unclear from the statement whether Rykunyk had realized that Rose stopped breathing. A doctor testified that Rose's tonsillectomy of a couple of weeks earlier may have caused her throat to have been more prone to swelling than usual.

Mr. Eiler was not called to testify.

In the end, the coroner's jury concluded, in part: "From the evidence adduced, we the jury find the said suffocation of the girl was caused by having been gagged and said gag having been placed in her mouth by her father, Steve Eiler."

The following morning, both Eiler and Rykunyk were charged with manslaughter. 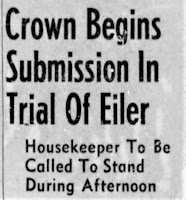 The two had separate trials that took place in May 1939.

Eiler plead not guilt and did not testify at his own trial, but Kay Rykunyk did and her story had not changed. A jury found Eiler guilty after just 45 minutes of deliberation.

Mr. Justice Donovan said: "This is not a case for a heavy sentence. Eiler's chief fault was his foolhardiness. It really might be termed a neglect case." He was later sentenced to nine months.

Rykunyk plead guilty at her trial and was considered only an accomplice in the death. She received a suspended sentence.

In a final twist to the story of the death of Rose Eiler is that Stephen Eiler committed suicide in his cell at Headlingley Jail at around 4:00 a.m. on June 21, 1939. The jail's governor said that Eiler appeared to be brooding over the death of his daughter more than usual. Newspaper articles do not mention a suicide note or a confession.

As for the other people in the story, any newspaper mentions of them end at the end of the trial.

Soon after the murder, little Joan initially went to live with an aunt on her mother's side. Both the aunt and a police source in late January said that Joan  had woken up during the commotion but was too scared to move. She was still terrified of the "man with the dirty face" who was in the apartment that night and too young to understand that her father and Rose were not coming home.

Before the coroner's inquest began in February Mrs. Eiler applied for custody of Joan. After the inquest found him the cause of Rose's death she filed for divorce citing adultery.

A search of variations of the names of Mrs. Eiler, including using her maiden name and her mother's last name, turn up no news stories. The same can be said for Joan.

One can only hope that they managed to find some sort of peace and happiness with new names and, perhaps, in a new city.

Email ThisBlogThis!Share to TwitterShare to FacebookShare to Pinterest
Topic: Tragic