Alton White Jr. of Winnipeg is credited with being just the second black professional hockey player. While there has been increased attention about pioneering black players in recent years, such as Willy O'Ree's induction into the Hockey Hall of Fame and the NHL's "Hockey is for Everyone" campaign, White is usually left out.

The reason for the oversight, or snub as some consider it, is the fact that White's 145 game pro career in which he amassed 38 goals and 46 assists for a total of 84 points were played in the WHA, not he NHL which often considers itself as the only professional league of record. For instance, White does not even appear on the "Hockey is For Everyone" list of black players.

Here's a look back at the life and career of Alton White Jr..

Alton White Jr. was born on May 31, 1945 in Amherst, Nova Scotia, one of five sons of Alton and Stella White. In 1952, the family moved to Winnipeg where his father got work as a steward-porter with the CNR. By 1955, they had purchased a home at 663 Jessie Avenue.

Though they where likely the only black family in the neighbourhood, White said he didn't feel he experienced racism as a kid. He described Winnipeg in a Fort Wayne, Indiana News Sentinel article in January 2018 as "full of immigrants", saying, “We read about it (racism) in the paper, but you’d say, ‘Does that really happen?' I always hung around with my buddies who were all white kids and never thought anything of it. I was always treated pretty well.” 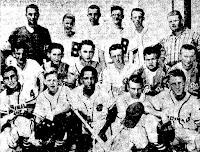 White first made the local sports pages as a baseball player - a pitcher for the "Braves" in the Winnipeg Optimist No. 2 Little League from 1956 to 1959.

In August 1959, he was a member of the South Winnipeg All Stars team that traveled to Brandon to meet their All Stars and won the provincial PONY league baseball championship and the Free Press Cup. White made two hits, including a triple, and stopped a line drive with a one-handed catch in the seventh to retire Brandon.

While attending Kelvin High School, (ca. 1959 - 1963), White played football for the school team and baseball for Isaac Brock Community Club. He continued with his baseball through his first year at United College.

White of the Rangers scores against the Winnipeg Monarchs on Nov. 29 1963

White learned to skate at age four but it wasn't until he came to Winnipeg that he was introduced to organized hockey.

He once explained to an American reporter that the East Coast was "not particularly known for hockey" and it was too expensive for many kids to play. In Winnipeg, he said, "People were very generous in supplying kids, black or white, with equipment and places to play." He continued, "I was just lucky, that's all. My family moved to Winnipeg when I was eight and here I really started to play, first in playground leagues and then in junior hockey. That gave me my chance"

Despite the relatively late introduction to competitive hockey through Earl Grey, White excelled at it.

White joined the Winnipeg Rangers of the Manitoba Junior Hockey League for the 1962-63 season. The following year, he finished seventh best in the league's scoring championship with 22 goals and 29 assists in 44 games. In 1964-65 he was appointed the Rangers' captain.

White would be credited as the first black player to score a hat-trick in 1973, but he registered at least two as Rangers captain. The first came in Selkirk against the Winnipeg Warriors on February 17, 1965 and the second against the Winnipeg Monarchs on March 21, 1965 in Winnipeg.

Despite his scoring touch, there were a couple of things that dogged White. One was his size: just 5' 9" and hovering around 170 pounds, (measurements a reporter once referred to as "generously listed"). The other, as noted by Free Press sports columnist Stan Fischler, "a penchant for playing hockey on the clean side."

Size might have been a factor in January 1965 when White was checked into the boards and knocked senseless. The following day, Victoria Hospital reported him to be in "fairly good" condition with a possible concussion. 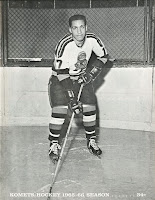 Despite his size, scouts took notice of White. In 1964-65 he got a three game tryout with the St. Paul Rangers of the International Hockey League (IHL). For the 1965-66 season, he was off to play for the IHL's Fort Wayne (Indiana) Komets.

Vince Leah noted in his column of November 20, 1965 that the New York Rangers "were taking a long look" at White and he was drafted into their organization.

In October 1966, White was picked up off waivers from the Des Moines Oak Leafs by the new IHL expansion team the Columbus Checkers. White played three seasons with the Checkers averaging more than a point per game, which was impressive considering that the expansion team was taking time to find its legs.

Each of those years White attended the Rangers training camp but didn't make he cut. He said at the time that "they must have thought I wasn't big enough."

The next  break for White came before the 1969 - 70 season when the New York Rangers released him and the Oakland Golden Seals sent him to play for the Providence Reds of the American Hockey League (AHL), one of their minor league affiliates.


White wasn't exactly a stranger to the team. He had been called up in April 1969 to play a handful of playoff games when one of their forwards got injured. It was noted a the time that White was the first, (and would be the only), black player to lace up for the storied franchise.

In each of his three seasons with the Reds, White finished second or third best in team scoring statistics, but his size was still an issue.

When he attended the 1970 Golden Seals training camp, General Manager Frank Selke Jr. told the Tribune: "He's an unbelievably hard worker. He checks well, skates well and has a super attitude. Its just that he's not very big." He noted that while White had managed to put on eight pounds in the off-season he still weighed just 170.

In 1972, the World Hockey Association (WHA) was created as a big-time professional league to compete with the NHL. It meant new opportunities for players like White who, it was becoming clear, was not going to make it in the NHL.

Aside from his size, was race an issue? In that 2018 Fort Wayne News Sentinel article he said of his time on the doorstep of the NHL: “I just never got the call. There were a lot of guys up there who I was a better hockey player than, but I never rocked the boat. I just played as well as I could.”  The reporter asked: "Was it because of racism?" White would only reply: “I hate to say that, but…”.

White was on the radar of a at least a couple of teams at the WHA's first draft. Ben Hatskin of the Winnipeg Jets had him on his short list 70 players that he wanted to draft, but in the end the 27-year-old ended up going to the New York Raiders.

The signing garnered a great deal of media attention for White as the only black player drafted and only the second black person to play in the big leagues. (The first was Willy O'Ree who played for the NHL's Boston Bruins in 1957-58 and in 1960-61 and at the time was still bouncing around in the minor leagues.)

Some of that attention was in the form of U.S. wire stories out of New York that ran in dozens, if not hundreds, of newspapers across the country, even in non-traditional hockey markets like Florida and Texas. Black publications that normally wouldn't cover hockey, such as Jet and Ebony, also wrote about White.

In a 1972 Associated Press wire story the reporter tried to make a comparison with Jackie Robinson, something White dismissed immediately due to what Robinson had to endure off the field: "He had to undergo all kinds of hardship. He couldn't eat with he other guys, he couldn't stay in he same hotels."

White went on to say in a CPI wire story a few months later: "(Robinson) opened the door for every black person in all sports. I would like to think I would have put up with what he went through but I don't know."


While his signing was celebrated, sadly his parents were not there to see it. His mother died in 1966 and his father in 1970. His wife, Linda, was there. They two met in Vancouver at a West Indian Independence Day dance and married in 1969. They settled in Vancouver. 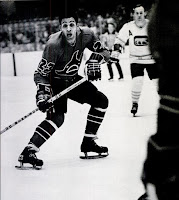 By November 1972, White had only played 13 games for New York and most of that was spent warming the bench. He asked to be traded and later that month got his wish when he was dealt to the  Los Angeles Sharks, a new WHA expansion team.

Under coach Terry Slater, White got his ice time and in his first 16 games with LA he managed 12 points including the game winning goal against his old team a week after the trade.

White had played against Slater and said that he was one of the main reasons he wanted to go to LA. Slater called White a "good two-way player always hustling for the puck" and that he helped make up one the best forward line in the league.

Arguably the most famous night of White's career came on January 10, 1973 when he scored a true hat trick in the second period of an 8-5 win over the Chicago Cougars.

The Sharks started the 1973-74 season off badly and by late November were in last place in their division. Four players, including White, were sent down to he farm team in Greensboro, North Carolina. White returned to he lineup on January 8, 1974 and registered two assists and praise from his coach in a win over the Winnipeg Jets.

The Sharks, which became the Michigan Stags before the start of the 1974-75 season, tried to trade White to another WHA team, but the deal fell through. He ended up being sent down to one of their affiliates, the Syracuse Blazers of the minor professional North American Hockey League.

White played his first of 46 games for Syracuse starting on October 23, 1974. He was later recalled to the Stags to play out the remaining 27 games of the season.

After that 1974-75 season, White's WHA career was over. It is unclear if he toiled in other junior leagues, though there are a couple of April 1977 mentions in the Winnipeg papers of an Alton White playing for the Warroad Lakers of the Western Canadian Intermediate Hockey League.

According to the 2018 Fort Wayne News Sentinel article, White returned briefly to Winnipeg before moving back to Vancouver and getting into the construction business with his brother. He and Stella still reside there.

Hockey is our National game. this article is very motivated information about Hockey India. please post about something Dhyan Chandra.

We treat the evaluation process serious and don’t publish fake reviews. In this essayedge review you can learn all information about the company which you won’t find elsewhere.