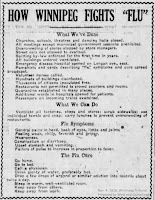 On October 3, 1918, the moment Manitobans were dreading happened. Two Quebec soldiers, Privates E. Murray and W. Barney, who had taken ill on a train a few days earlier, died of influenza at a Winnipeg hospital.

They were Manitoba's first known cases of "Spanish" Flu and forced provincial officials to admit that the disease was undoubtedly spreading throughout the population at large. Within four months, tens of thousands would fall ill and around 1,200 Manitobans would die from the disease.

A few years back I wrote about the Spanish Flu's toll on Manitoba. You can check it out here and forgive some of the old, broken hyperlinks.