The Cockshutt Plow Company, later the Cockshutt Farm Equipment Company, was founded in Brantford, Ontario in 1882. It manufactured farm implements such as thrashers, spreaders and plows.

The company had a small sales office and parts depot in Brandon since at least 1905. Five years later, Cockshutt went on a major corporate expansion in the west which meant a much larger facility for the city.

The Brandon Sun of September 8, 1910 noted: “City Engineer Speakman has granted a building permit to the Cockshutt Plow Co for the erection of their new warehouse on Pacific Avenue and Sixth Street.”

The three-storey building cost about $20,000 to construct. It contained a showroom, repair department, sales offices and an extensive parts depot. 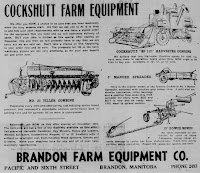 World War II had a major impact on Cockshutt's business. Its factories in Ontario were retooled as aircraft and munitions factories which put a halt to new equipment and parts.

After 1944, they followed how car manufacturers sold and serviced their equipment by finding local dealerships to lease a franchise. In Brandon, that dealer was Brandon Farm Equipment Co. which took over the building in 1945. 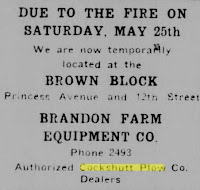 On May 25, 1946, there was a fire in a wooden warehouse situated behind the Massey-Harris Building across the street. Burning embers drifted across the street to the Cockshutt property. Both buildings burned to the ground.

What made the fire particularly awkward was that five days later, George Cockshutt, company president, was arriving in town as part of a western tour to see the company's facilities and to speak to the local Board of Trade. 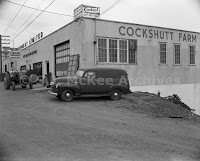 Cockshutt Plow, which still owned the building, rebuilt sometime in late 1946 and Brandon Farm Equipment returned to the site. The new building was just a single story but wider than the original structure.

In the early 1950s a couple of dealerships came and went at this address and by 1955 it was simply known as Cockshutt Farm Equipment.  In 1958, Adrian Roy's Roy's Sales and Service was the new dealer.

In 1962, Cockshutt was acquired by the White Motor Company of Cleveland. There was already a dealer for White's line of tractors in town, Lawson's on 9th Avenue. Within a year or two the Roy's / Cockshutt dealership disappeared in favour of Lawson's. 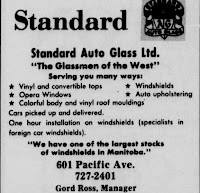 The building appears to have sat empty for a number of years until divided into three addresses, 545, 601 and 603 Pacific.

In 2001, Roddy Batson and Noel Harding opened the Brandon Boxing and Fitness Club on the second floor of the Massey-Harris Building across the street. In 2006, The Massey Manor sent the club packing and they leased the former Fleece Line space.

The club was destroyed in the fire. 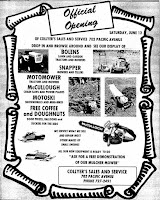 Collyers Sales and Service, the tenant at the time of the fire, traces its roots back to 1967 when Ward Collyer opened Collyer's West End Service, an auto garage, on 26th Street at Victoria. In 1970, the business relocated to 702 Pacific, across the street, and became Collyer's City Centre Service.

In 1977, the company was rebranded Collyer's Sales and Service and in 1986 relocated to 603 Pacific Avenue.

was an interesting read ... but no mention of Brandon British Auto ... a British Leyland and Volvo Dealer that was in the East end of the Collyer's building. I worked there in the mid to late 70's.