Designed by Brandon architect Thomas Sinclair, the three-storey, 70,000 square foot building was constructed in 1913 - 14 for the Gordon McKay Company of Toronto, the largest dry goods wholesaler in the country. This was to be its Western Canadian headquarters.

City officials were so taken with company president J W Woods and his estimate of $1 million in annual sales and good paying jobs during a time of deep recession that they worked out a sweetheart deal with the company.

The city donated the land and borrowed $165,000 to construct the building. The company itself put in about $30,000 and would pay monthly "mortgage" payments to the city.

Gordon McKay took over the building in Spring 1914 and began making payments but never moved in, citing the recession, then the war, as reasons for not setting up shop. In 1917, the building became property of the city.

During the war, the building was used to house troops and later for agricultural conferences. 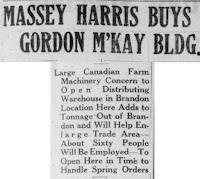 In late 1920, thanks to the efforts of the Board of Trade and its president P. A. Kennedy, a buyer was found. Toronto's Massey Harris paid around $130,000 for its new Manitoba warehouse operation. 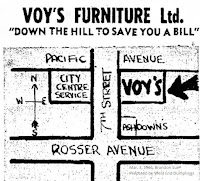 In 1964, the building became home to Voy's furniture store which was previously located on 9th Avenue.

The company had deep roots in the city, starting out as Brockie Furniture and Funeral Service. In 1925, Alfred Voy went to work for Brockie and eventually became a partner.

When, in 1947, the decision was made to split the company, Voy took over the furniture business.

In 1985, some renovations were done and toy and game retailer Toyland moved in until around 1990.

In 1994, the building became home to a consortium of organizations that collected items for reuse and recycling under the banner Westman Recycling. It included a consignment store and what eventually became known as the Re-store run by Canadian Mental Health Association - Brandon Region.

In 2007, the CMHA, Habitat for Humanity and Brandon Friendship Centre announced a $6.7 million plan to convert the building into affordable housing units to be known as Massey Manor. The CMHA owns bottom two floors and Brandon friendship centre the top.

Of the 58 suites, fourteen are market rate condominiums and four are emergency shelter beds.

All were severely damaged or destroyed in the fire. At last report, everyone made it out alive.

So when was the National Exchange in the Massey building?