In 2015 (C. Cassidy)
The oldest of the two historic structures that burned today is 705 Pacific Avenue, built for the Hanbury Hardware Company in 1907.

John Hanbury was born and raised in Ontario and worked in the building trades, eventually becoming a contractor. He came to Brandon in 1882 to set up business here and oversaw the construction of dozens of buildings, from houses and small commercial buildings to significant landmarks such as the original Brandon Hospital and post office building. 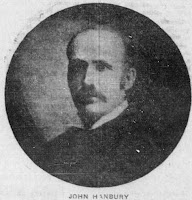 In 1891, Hansbury expanded his business by opening a lumber yard and woodworking shop called Hanbury Manufacturing Co. in the 600 block of Assiniboine Avenue.

The company made sashes and doors and their custom woodwork included office and hotel furniture and fixtures. 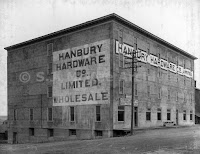 In 1907, Hanbury had this five-storey, 42,000 square foot building constructed at 703 - 705 Pacific Avenue for a new wholesale venture, Hanbury Hardware.

The main floor consisted of corporate offices for the four companies Hanbury was involved in: Hanbury Manufacturing Co, managed by A. C. Ayre; Hanbury Hardware Co, A E Carmichael, manager; Canadian Coal Co., A B Fleming, manager; and Manitoba Hardware and Lumber Co., W M Tyndall, secretary. The upper floors were warehouse for the hardware company.

By this time, Hanbury had long been the second largest employer in Brandon after the CPR.

In 1920, Hanbury sold off his hardware division to Wood, Valance and Co. of Hamilton. The company distributed the contents of the warehouse to its branches in Winnipeg and Regina.

Five years later, the remainder of his Manitoba assets were sold off and Hanbury died in B.C. in 1928. 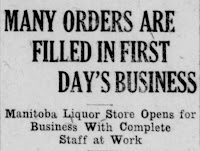 In 1923, much of the former Manitoba Hardware Company space was leased by the provincial government for the city’s first post-prohibition, government-run liquor store. Its first manager was James Kirkcaldy, the city’s former police chief.

On October 17, 1923, the Brandon Sun reported: “There was a line up of cars waiting…” when the store opened that morning. The store closed soon after Brandon got a new, self serve liquor store at Tenth Street and Victoria Avenue in 1970.

In 1922, the building became home to farm implement dealership Cameron and Rathwell. The company was formed earlier that year when W A Campbell and William F Rathwell joined forces in business.

To diversify its business, the company purchased a car repair garage and used car lot in 1928 and moved the sales area to an adjacent property.

In 1941, Christie School Supply took over the building.

The company was created in 1881 by E. L. Christie, first as a book store on Rosser Avenue. It then got into the business of distributing school supplies, including school furniture and textbooks.

By settling at 1941 they were able to their offices and warehouse together under one roof.

Over the decades, the company moved into the office furnishings and supply business, changing its name to Christie's Office Plus and continued to operate at this address until fire destroyed the building in 2018.

My understanding was that part of the store was used as a liquor store. Am I wrong in that idea? I worked at Christies School Supply for many years and left in 1988.

I can recall the liquor store there. I was only 10 years old when we moved to Brandon but I can remember going in there with my father. One of every bottle of booze was on display and you had to write down the number and take it to the counter. An employee would then go into the back and get your order.

Funny story, my father was an RCMP officer back in the 40's-50's-60's. He was posted to the Whitemouth detachment in the late 1940's. The liquor store in Brandon (Christies Building) was broken into and the safe was blown up. The thieves got away with $100's of dollars and fled in a car towards Winnipeg. A broadcast went out to the RCMP Detachments and the next day my dad was having coffee at the Whitemouth diner and holly cow, there was the car. He arrested the two and recovered most of the money. There were a lot of one dollar bills recovered and they all had two small holes in the top left. Turns out, in Brandon, when you applied for a liquor licence, the cost was one dollar and they used a pin to pin the dollar the licence application. The RCMP Ident managed to match up several pin holes in the bills to the paperwork left behind and the two were convicted in the Brandon court. My dad said that the prosecutor in Brandon at that time was Frank Meighen, founder of Meighen Haddad.

The history will still be there. Only the building is gone.

Yet, it was brandon's first post-prohibition liquor store opened in October 1923. it closed soon after a new, self serve store was opened in 1970. I've added it to the blog post !

Do you have any Technical Data file which is very much important for you, and There "Aol Support Number" has been proven that. And it has been Resolve as per our knowledge.

eToro is the best forex broker for novice and advanced traders.