Erinside School was built on this five acre site in 1914 after a railway spur line was brought through the area. The adjacent teacher's residence was constructed in 1927.

The setting was probably as lonely then as it is now. Nearby Erinview, an unincorporated hamlet established 20 years earlier, was the more "happening" place with its own school and some businesses. Even in the area newspaper, news about at Erinside School was reported under the Erinview section.

The 1914 school year was kicked off by a picnic on June 24th with teacher, Miss Gladys Jickling and some her friends taking the 22 grade 1- 6 students to Inglis by train for a picnic. Upon their return, there was an afternoon of sports on the school grounds.

Jickling was likely the daughter of Laura and Harry Jickling who came to Manitoba in 1871. She taught at Erinside for a year, then can be found teaching in Winnipeg at Polson school by 1916. She may have later relocated to Toronto.

The school was not just a school for area residents. It also hosted dances, an annual Christmas pageant and community picnics / sports days.

According to Woodland Echoes, the (barely) existing teacherage was built in 1927.

There is no mention of an earlier residential structure on the site but, given its isolated location, it is almost certain that there was one.

The neighbouring Erinview school closed in 1942 due to a dwindling number of students. Those that remained were transferred to Erinside. That school burned down a few years later and was replaced by a cairn.

The name of the combined school division appears to have been Erinview and in later newspaper articles this school becomes referred to as Erinview School. This slight change in name causes some confusion when researching the building's later history.

With a dwindling numbers of students, in June 1964 the question was put before voters to dissolve Erinview School Division in favour of sending their 30 or so children to Teulon Elementary School. They agreed.

On June 12, 1964, one of the last activities at the school was the teacher and her husband, the newspaper did not mention her by name, (perhaps still Mrs. Vidal?), took the students to Lundar Fair.

At a June 28 community picnic she was presented with a gift from the school division for her service. 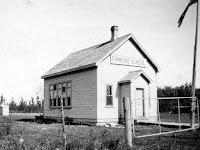 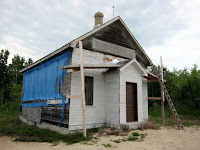 The building appears to have remained unused since that time.

In the 80s or 90s, when PR 415 was widened, the school was moved a few feet north on the site.In 2011, it received an exterior renovation, (for photos over the decades see MHS.)

The school and teacherage became a municipal heritage site in 2001.

I work at springs Christian academy .this amazing school and can not say enough good things about the staff and students here!!! I absolutely love going to work every day!!