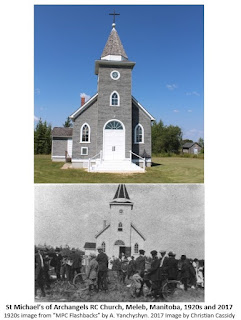 St. Michael’s of Archangels Roman Catholic Church in Meleb, Manitoba is having a 100th anniversary church service this Sunday, August 20th at 2 pm. It will be followed by a picnic in MPC Park – the one with the giant mushrooms!

Meleb is located about 100 km north of Winnipeg on Highway 7.

Though Ukrainian and Polish settlers had been in the immediate area since at least 1900, the village did not get a legal name until a CPR spur line came through in 1910.

The small siding was put on land that had been owned by two of these settlers, Ukrainian farmer Stephan Melnyk and Jewish merchant Abraham Lebman (Leibman). The community's name is a combination of their surnames.(3)

The areas Greek, Ukrainian, Polish and Jewish communities in the region worked closely together.

By 1915, the Poles had a sizable enough community that they were ready to build a church at nearby Malonton, but were pursued to instead help the Greeks build theirs instead.(2)

Two years later, when the Poles made plans to build St. Micheal's in Meleb, two of its largest benefactors were a pair of Jewish merchants, Mr. Naidech and Leibman, who put up $500 each for its construction.(1) 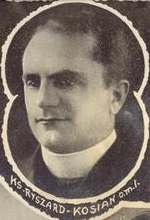 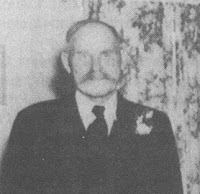 In 1918, this church was constructed for the Polish community under the supervision of Fr. Richard Kosian. The builder was local Michael Gottleib, an Austrian immigrant who built a number of structures in the region, including Park School.

On September 29, 1918, it was blessed by Archbishop Alfred Sinott, Archbishop of Winnipeg, who  ”…gave it the title of St. Micheal, to compliment the men who built it, many of whom bore the name of he mighty Archangel.” (2)

The church held both Ukrainian and Polish services until the Ukrainian Catholic Church of the Assumption was built across the street in 1923.

Meleb never became a thriving centre. CPR guide books through the 1920s noted that its population was around 40 with a trading area of 350.

In the 1960s, St. Michael's closed due to a lack of congregation. Normally, one service is held per year in the month of August.

In he late 1980s the church was extensively renovated. In 1989 it became a provincial heritage site. 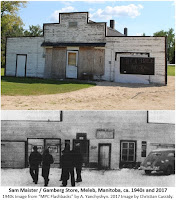 A couple of interesting side notes ...

- Former premier Ed Schryer is a grandson of Micheal Gottleib on his mother's side.

- Premier John Bracken spoke in Maleb at a rally in June 1927. The Tribune noted: "That Mr. Bracken is steadily losing ground even in what were considered strongholds is evidenced by the desperate measures he is taking in other parts to stem the adverse tide."

- In October 1932, about 100 "communist farmers" from Meleb and area marched to the Legislature to make demands of the Premier Bracken to cancel farmers' debts, institute a minimum income and provide free healthcare.

The Brainerd Minnesota Daily Dispatch, (likely through a wire story), reported that the group was young, many of them teens, and were: “...striding along roughly in columns of fours, in good humour and livening their long trudge with banter and various frivolities.”

Only once was Maleb the focus of front page news in Winnipeg and across the country. That was in October 1933.

Farmer Andrew Orichowski, 58, attempted to kill his wife, Sophie, 78, at a neighbouring farm on October 23, 1933. He initially tried shooting her, then hit her in the head with an axe. Her body was discovered and she was rushed to Teulon hospital where she died eight days later.

She lived long enough to tell the RCMP: "Yesterday at noon my husband asked for pickle juice and I went out with a sealer and saucer where he followed me to the granary and said ‘see I caught you’ and he shot me. He told me 'I will show you not to run with Watyshowski.' I am telling the truth as I know I am going to die."

After the committing the act, Andrew was found wandering towards Maleb, telling people what he had done along the way. He was arrested without incident at one of the general stores.

Orichowski, who never explained is actions on the stand, was tried and found guilty of murder. He was hanged on May 22, 1934. (The day after another axe murder, Julian Komarnicki, who killed a man after a dispute at the wood camp they were working at.)

For more modern day images of Meleb, check out my Flickr album.

*If you are visiting Meleb. be sure to check out MPC Flashbacks for great photos and homestead maps. There is also a great map and miniatures of some area buildings, such as schools and churches, at MPC Park on Highway 7 at the turnoff for Meleb.