The ca. 1947 Meadows, Manitoba Paterson Grain elevator is being demolished.

Meadows was created ca. 1882, established by the CPR. It took until 1905 before the settlement was large enough to ask the R. M. of Rossburn for permission to open their own school. A train station was added in 1906. 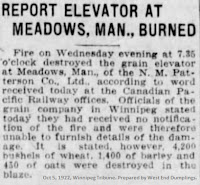 Settlers guides from the late 1880s show that there was grain collection from Meadows but it was an informal system where the grain was stored and scooped into rail cars. It wasn't until 1912 that it got its first formal elevator.

Initially, it was run by a local company then sold to the McLaughlin Grain Co. in 1915.

In 1922, Paterson Grain purchased the elevator.

According to the CPR, that year the town boasted a population of 150 with a  school, general store, elevator, oil tank and blacksmith. Before the year was out, however, a fire destroyed the village`s elevator, bank building and blacksmith`s shop.

When the Marquette elevator was torn down in 2003, rumours were that Meadows would be next, though a representative from Paterson Grain told the Stonewall Argus that there were no such plans at the time.

On June 28, 2017, a permit was signed off on for the demolition of the building structure.

For more images of the Meadows elevator.

Thanks for the post, those grain elevators look interesting.