To commemorate the 100th anniversary of the start of the First World War, I am working on a series of blog posts and radio shows that will look back at some of the Manitobans who died in action. For more about this project and links to other posts, follow this link. 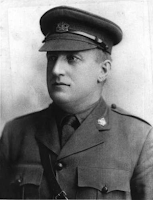 Endre Johanssen Cleven was born in 1874 in Skudenes, Norway. At age 17, he settled at Inwood, Iowa, then New York City where he studied music. In 1903, after a return trip home, he resettled in Winnipeg where he became a key figure in the city's Norwegian-Canadian community and played in the Walker Theatre orchestra.

In 1912, he was employed by the Dominion Immigration Office. According to an article in an Iowa based Norwegian-language newspaper published after his death, he was "in charge of Canada's Scandinavian settlement program."  (You can read the translated article here. Note that the middle name is not the same as on his military records and in Winnipeg media articles, but it is the same person.) 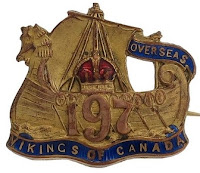 When World War I was declared, Cleven was already a lieutenant in the 90th Regiment - Royal Winnipeg Rifles militia. He also had previous war experience, noting on his Officers' Declaration Papers that he had spent four years with the U.S. Army during the Spanish American War and a tour in the Philippines.

Given his connections in the Scandinavian Community and his rank in the 90th, During World War I, commanding officer Lt. Col A. G. Fonseca appointed Cleven as quartermaster of the newly-created 197th Overseas Battalion, nicknamed the Vikings of Canada.

On July 3, 1916, Cleven and Fonseca, the commanding officer of the 197th Battalion, were to visit Camp Hughes where their men were being sent for training exercises. They first stopped at the Cleven household at 412 Toronto Street to have some lunch before embarking in a Lozier 4 car.

At about 4:00 pm they were three miles east of high Bluff, Manitoba, near Portage la Prairie, when the driver swerved to avoid a pothole. The car touched the shoulder and rolled into the ditch. Cleven was thrown from the vehicle and killed. (Fonseca spent weeks in hospital recovering and the driver had minor injuries.)
Cleven, who would never meet his youngest child, is buried at Elmwood Cemetery.