Former Safeway at 893 Portage gets a makeover

The tanning spa at 893 Portage Avenue is getting a makeover.

After stripping away decades of old work from the exterior, workers revealed a remarkably intact original Safeway facade dating back to the store's opening in November 1929.

One of the unique features uncovered is the horizontal bank of windows that runs beneath the sign. Most, if not all, of the remaining original Safeway buildings appear to have had them removed.

You can even see the screw holes from the hardware that held the original awning in place.

U.S. grocery giant Safeway came to Canada in 1929 and set up its head office in Winnipeg. Unlike local grocery chains of the time, Safeway used a "cookie cutter" method of retailing.

It custom-built its stores so that they were identical in appearance both inside and out. A customer could go to any part of the city and instantly recognize a Safeway by its design and, once inside, could find the same products in the same places.

The "Portage near Arlington" location opened on November 2, 1929 and was the eight store in its chain. By the end of the year Safeway boasted 16 stores.

In the early 1950s, the Safeway relocated to a much bigger store two doors down, what is now Food Fare, and 893 Portage began a long run as a drug store.

From 1954 until the mid-1970s it was Storr's Drug Store under owner William W. Storr.  Through the 1980s it was known as MediMart Drugs and from the 1990 to early aughties was Vimy Park Pharmacy.

After sitting vacant for some years, it became Bodyshades tanning salon in mid-2007. 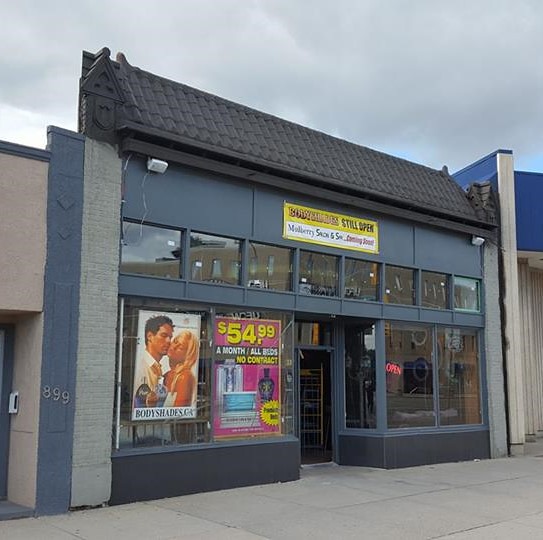 quite historical and with so many memories. i like the fact that they have maintained it for so long.

Just felt like i traveled back in time. The concept of having the outside and inside identical in all its Safeway Stores seems like a concept before its time.

this is a good work that you people are doing.

So is every building you see with that tile/pagoda look a former Safeway? There’s one on Lilac, maybe another near Laura Secord? Interesting stuff����

There are a lot of other stores with a similar roof line that were not Safeways. I am not sure if it was a case that other chains imitated Safeway stores, or because Safeway took over a few chains like Piggly Wiggly and Mutual when they came to town - absorbing some store and allowing other to run under their own store names for a time, that they may have retrofitted the stores to mimic their roof line.

Another tell is that the better preserved original Safeways still have the Safeway shield and caps on the columns at each end of the store facade.

The one on Lilac was an original Safeway. The one in Wolseley, Chestnut Grocery I think it is called, was built as a Piggly Wiggly, taken over by Safeway in the 1930s then converted to a Safeway in 1941.