In late May 2017, Greyhound Canada put Brandon’s bus terminal located on 6th Street at  Pacific Avenue up for sale. The company is not leaving town, just looking to relocate to a smaller, yet-to-be-identified space.

Given the impending sale, I thought I would take a look back at Brandon’s bus terminal history. (Note that the facility was originally called a bus "depot", the use of "terminal" came in the late 1930s after Greyhound became involved.)


Though omnibus transportation had existed in the province since the 1870s, it came to the fore starting in the early 1930s.

What had been little more than cart trails connecting communities were becoming a system of formal, graded roads and highways. This was thanks to the advocacy of groups such as the Manitoba Good Roads Association and Manitoba Bus Owners’ Association. (For more about early inter-city bus history in Manitoba, check out the MTHA’s page or the book Dusty Trails to Divided Highways: A History of Intercity Bus Lines in Manitoba.)

The Depression also helped matters as road building was a great way to put large numbers of rural men to work in the form of Depression relief projects, the costs for which were heavily underwritten by the Federal government. 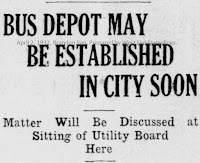 Urged on by the bus owners and supported by the city and its business leaders, the matter of constructing a central bus terminal for Brandon was raised at the Municipal and Public Utility Board hearings held there in April 1932.

It took more than a year to get approval from the board but the bus companies were already busy at work. Just days after the June 1933 approval it was decided to: “...open the new premises immediately with a competent staff in charge of ample waiting rooms and comfort and wash room facilities.”

The terminal also served as a central information centre for people to write or call to find out about the schedules of all inter-city bus lines buses that served in the city. 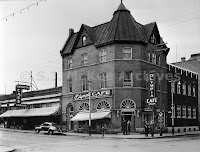 
The location chosen for the city's first bus terminal was 112 - 10th Street. It was wedged into a rented space in the Olympia Block, between the Olympia Cafe and Olympia Candy store.

An image of the terminal can't be found but the above photo shows the space where it would have been located. According to the McKee Archives, this photo is dated 1939, the same year the terminal relocated.

The terminal served the city well for the remainder of the Depression. One interesting note is the round-trip fare to Winnipeg during this time. What started out as advertised at over $6.00 when the terminal first opened soon fell to $5.00 and by 1935 could be had for as little as $2.70.

Whether this was a sign of increased competition or companies desperate for customers during hard times, or a combination of both, is not clear.

As the Depression ended, the need for a larger bus terminal was apparent. Not only were there more customers but the buses themselves were getting larger, some able to hold up to 40 passengers.

This time, it was Trans-Continental Coach Lines that financed the $25,000 terminal project on Princess Avenue at 11th Street. It was a prominent location, sharing the intersection with the court house, post office and the Brandon Club.

Trans-Continental was formed earlier in the decade to run from Winnipeg to Swift Current and had an agreement with Greyhound Bus Lines in Manitoba that would allow their passengers to tap into Greyhound's national system. In 1938, Trans-Continental was absorbed by Greyhound, though it continued to run under its own name through the 1940s. 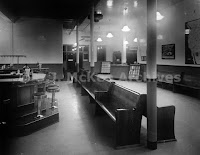 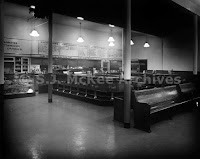 E. C. Higgins of Brandon was the contractor for the new terminal, which measured 120 feet x 65 feet. The building's art moderne inspired exterior was finished in white stucco with black trim.

Inside, the building was divided into three main areas: a garage that held three buses, company offices, and a main hall containing a waiting area, restaurant and ticket booth. It was finished in ivory and blue trim, the company colours.

Eventually, the Curio Shop gift shop was added and the cafe became known as the Maxwell House Grill.

Though it was owned by Trans-Continental, any inter-city bus serving Brandon could use it.  The passenger loading area was at the rear of the building.


The new bus terminal served the city well but by the time the 1970s came it was no longer up for the task.

The waiting room was constantly overcrowded and there weren't enough bays to hold all the buses, leaving many to idle on the streets around it. Because of St. Hedwig's church to the south, the terminal was landlocked and could not add more apron.

There was also no onsite parking for those meeting or seeing off passengers. 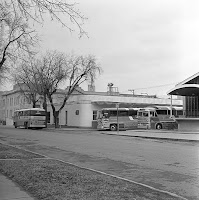 
In April, 1975, Greyhound approached the city wanting to build a new bus depot on the site of an abandoned Safeway at the intersection of 6th Street and Rosser Avenue. They also offered that Brandon Transit could use the new building as their downtown terminal if they wished.

The city determined that the request needed more study. Later that year, before the city even started to study it, the store was leased to a furniture retailer.

In 1980, the bus terminal's management made a $300,000 offer to purchase the former Prince Edward Hotel site, which at that time was a surface parking lot. the city rejected the offer, instead wanting to hold out for a more substantial development.

The following year, the Safeway site became available again and Greyhound purchased it and demolished the store.

When the drawings were unveiled in September 1981, Greyhound management said that the plan would be a template for the redevelopment of their collection of aging, run-down terminals in smaller cities. (It is unclear if the design was, indeed, used anywhere else.)

Contractor E. C. Higgins and Sons of Brandon, (the same firm that built the 1939 bus depot), began construction in December 1981 and Greyhound moved in by the end of September 1982. The company held off on a formal grand opening until the restaurant space cold be filled.

The restaurant eventually fond a tenant; the Gold Prairie Restaurant which served Canadian and Chinese food. It is unclear if that formal opening ever happened.

As for the old terminal building, it sat empty for more than  a year.

There was some sentiment to see it saved as a landmark. One 1983 letter to the editor noted the uniqueness of its art moderne architecture: “Its streamlined façade and its entrance portico are relics of a style seen entirely too rarely in Brandon.”  It was purchased in 1984 in part by local law office Patterson Dubois who also wanted to see the building saved.

In the end, though, the building was gutted inside and out and given an unsympathetic renovation. The only hint of what was there is the one curved corner facing the intersection.

The building became Patterson Dubois' law office with other commercial space. It continues as a law office to this day.

In recent years, the number of inter-city bus companies and routes that serve the prairies has decreased dramatically and there is little need for such a large facility in a city the size of Brandon.

The building is currently on the market listed at just shy of $1 million. If you think an old bus terminal might be something you can put to use, check out the listing here!

Related:
For more of my Brandon, Manitoba posts

very interesting - I enjoy these types of history posts with old photos and the present use of said buildings.

Buses heading west and pulling into the alley between the Depot and what was then Western Motors seemed like a scary situation. Passengers on the drivers side of the bus almost seemed like the bus was going to rub up against Western Motors west wall.

This was a great read... I've read a lot of prairie railway station histories, but not nearly as many about bus stations. It seems to be a somewhat neglected field. Really interesting to find out about Brandon's bus stations.

After Safeway and before Greyhound the building was owned by Pue's Interior Furnishings Limited.

Back in the early 1980s, I was pleased to learn that the old 1939 depot was to be kept. I simply assumed that the art moderne exterior (and maybe the interior too) would be cleaned and restored as it was, cos hey...here we had an extant example of a sleek and handsome style! When I came into town to visit, boy was I disappointed! They'd renovated it to look like some strip mall, or something! Oh well.