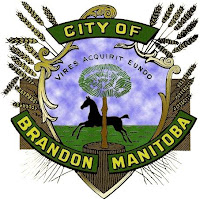 On May 30, 1882, the bill to incorporate the the City of Brandon was read a third time and passed by the Manitoba Legislature. Happy 135th !

Many years ago, I used to do a lot of work in Brandon and took an interest in its built history. I was hoping for the 135th birthday to pump out a number of the posts that have remained in my draft folder for one reason or another. I didn't quite get to them but they will be posted soon ! Below are links to previous Brandon history posts I have done.

A few need updating as I now have access to the Brandon Sun's archives and can make additions or correction. That, too, I will get to shortly!

For the 135th birthday, I thought I would post something rather interesting: 1934 film footage of the city! Its part of the Digney Family Fonds at the City of Burnaby Archives.

Digney, a theatre owner from Carberry, was the owner of Brandon's Oak Theatre from 1931 to 1935. The theatre went on to be the Towne and vacated in 1998.

This may be showing a contest held at the theatre where a Shetland pony was given away as a prize, (more about that in a nearly completed blog post!)

Unfortunately, most of their family films were shot after they moved to B.C. but there are a couple that show glimpses of Brandon. Check it out !

Here are some of my previous Brandon history posts:

Awesome details. Reading through it was just fabulous. I am also going to host the party for my business’s 10th foundation day and would like to host the grand party so finding recommendations for the prettiest event space NYC for a luncheon. So excited for the day!