The 75th Anniversary of If Day 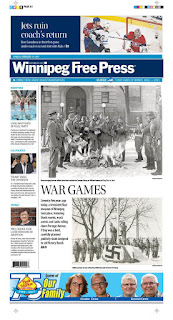 My column in today's Winnipeg Free Press marks the 75th Anniversary of "If Day".

If Day was as a simulated Nazi invasion of Winnipeg that took place on February 19, 1942. The event involved weeks of planning, thousands of volunteers, hundreds of pieces of equipment and the buy-in from the military, politicians, media, business organizations, church groups and others. 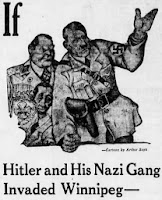 The event was supposed to give Winnipeggers a taste of what if would be like IF the Nazis weren't stopped overseas. It's ultimate goal was to sell Victory Bonds, a key tool in the Canadian government's financing of the war effort.
The level of detail was quite astonishing.

It started with the attack as planes swooped over the city, anti-aircraft guns and other artillery fired. Dynamite explosions were set off on the city's rivers.

Once the Nazis closed in on the city centre, city hall was raided and the mayor and other aldermen arrested. Then, it was on to the Legislature for the premier and some of his cabinet.

Roadblocks were set up and people stopped and asked to show their ID, books were burned at the main library and a downtown apartment block ransacked.

The event received North American wide media attention in dozens of newspapers, a three page spread in LIFE magazine and in movie theatres as newsreels.

For more about If Day, check out my column !

Interestingly, the Day also involved Oak Point, where one Nazi made himself, to my mum, obnoxious the entire day. She complained to the local police office and was told that it was better to know the enemy than not.
Earl Sande