Gillis and his partner, George Blow, responded to a police radio message of a robbery-in-progress at a gas station at Donald Street and St. Mary Avenue on the evening of January 24, 1936. As they pulled up, the 22-year-old thief, Ian Bryson, was leaving the building.

The two constables gave chase and Bryson turned and fired a shot that hit Gillis in the stomach.

Blow was able to catch Bryson while Gillis stumbled into the arms of a passing pedestrian. He was rushed to Misericordia Hospital in a taxi.

Aside from being a well-liked Winnipeg policeman who had joined the force in November 1912, Gillis was also a respected war veteran and award-winning athlete involved in a number of athletic leagues around town. Just days before the shooting he had been elected president of the Winnipeg chapter of the Cosmopolitan Club, a community service group.

Gillis and his wife, Annette, lived at 169 Morley Street with their two teenage children, George and Eleanor. His son told a reporter that his father was also an avid shutterbug and loved to take photos on their family vacations. 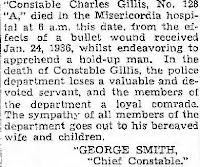 Notice posted by chief on Police Department bulletin board, Feb. 7, 1936

The daily newspapers ran daily updates on Gillis's condition and the city followed the ups and downs of his recovery.

Initially, Gillis remained in fair condition with some hope of recovery due to his excellent physical condition. The bullet, though, had torn his intestine in three places. As time went on, peritonitis, then pneumonia, set in.

Flags on civic and many private buildings flew at half mast. Hundreds filed past Gillis' coffin as he lay in state at a funeral home. A thousand people attended his funeral at St. Ignatius church.

The Winnipeg Tribune raised over $2,000 for a special fund to assist the widow and children.

It was noted by the Crown that he had a criminal record, including an earlier stint in jail, for other thefts.

Bryson's defense argued that he had been drinking all day and could not remember the shooting. It was also suggested that because Gillis ultimately died of pneumonia, the lung ailment could have struck him down whether or not he had been shot.

The jury was having none of it. Bryson was found guilty of the murder and sentenced to hang. 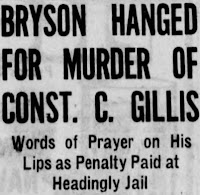 On the morning of November 20, 1936, Bryson was led to the gallows. He was reported to have looked calm and prayed quietly as the trap door was pulled at 7:27 a.m..

What makes this tragedy all the worse is that the cash drawer at the gas station had already been emptied for a deposit shortly before Bryson arrived. The total that could be handed over to him was thirty cents.