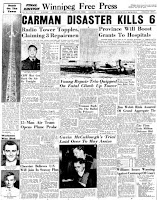 Today is the 65th anniversary of the Carman Air Disaster.

A few years back I blogged about the tragic event that started around noon on February 4, 1952 with the death of three people after an RCAF plane crashed into the CBC transmitter tower outside Carman, Manitoba. It ended twelve hours later with the death of three repairmen who were killed when the damaged tower collapsed on them.

For the anniversary I wanted to dig deeper into the story and see if I could expand it into one of my columns for the Winnipeg Free Press. That column appeared last Sunday.

One of the paths I followed was the short life of the plane's pilot, Flight Officer Charles "Charlie" Chow-Leong of Lethbridge, Alberta, and the story of Chinese Canadian soldiers during World War II.

Much of this research didn't make it into the column. Instead of keeping the information and photos provided by his family on my hard drive, I thought I would share it.

When Canada entered World War II, Canadian-born Chow-Leong wanted to enlist in the RCAF but found that it was closed to people of colour.

For Chinese Canadians, this was not the only discrimination they faced from the Canadian government.

Most Chinese immigrants came to Canada to help build the Canadian Pacific Railway. That's why Charlie's father, Ling Chow, and three of his brothers came around 1901. They worked in Alberta doing some of the most dangerous jobs, including the construction of the High Level Bridge, (also see), near Lethbridge.

As the various phases of railway construction were completed, the federal government had no desire to accept more Chinese immigrants. In 1885, it implemented a $50 "head tax" on all new Chinese immigrants, even on the immediate family members of those who had already come and finished their work on the railway. The government hoped that if it was too expensive for them to bring their loved ones here, that they would choose instead to return to their homeland.

The government's final, drastic measure came in 1923 with the introduction of the "Chinese Exclusion Act"  which imposed an almost complete ban on Chinese immigrants. (Exceptions included students, people in transit, diplomats and certain merchants.)

On Dominion Day, July 1, 1924, Chinese communities in cities and towns across the country left their businesses shuttered and commemorated what they called "Humiliation Day".

The Exclusion Act was used as an excuse for further discrimination against Chinese Canadians.

In Winnipeg, and perhaps other communities, there was a bylaw that banned women from working in Chinese restaurants or cafes. It was meant to cut off one of the only potential sources of income a wife or daughter might have if she immigrated. After the Exclusion Act, the bylaw stayed in place.

The city's civic legislation committee was advised by a law firm that they may have to remove the word "Chinese" from the bylaw or run the risk of a court striking it down.

The committee decided not to drop "Chinese", noting that it would cause hardship to non-Chinese restaurant and cafe owners who would have to apply for an exemption. Besides, “It was decided that the clause was satisfactory as it stood, in view of the fact that the Orientals are given different treatment to others by the imposition of a head tax by the Dominion Government." (Winnipeg Free Press, March 7, 1924) 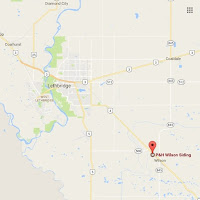 Ling Chow's wife, Ming Ho, came to Canada in 1920, thus paying the $500 tax. The couple established a 650-acre wheat farm at Wilson Siding, Alberta, about 25 kilometres south east of Lethbridge, where they raised their eight children. Charlie was the oldest, born June 27, 1922.

Charlie attended White School, then Lethbridge Collegiate and was working at the Ritz Cafe, a Chinese restaurant on 5th St. S. in Lethbridge, when World War II was declared.

The war caused a split in the Chinese community. As described at the Chinese Canadian Military Museum website:


"Those who wanted to volunteer argued that if Chinese wanted to be considered first class citizens, they needed to demonstrate their commitment to Canada.  Those who were opposed volunteering replied, 'Look at what the government has done to us.  Why should we fight for a country that doesn’t want us?'" 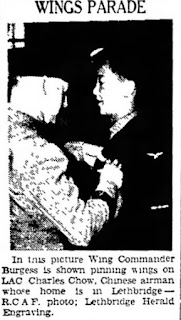 It wasn't until October 1942, with the RCAF growing desperate for new recruits and after the war had entered the Pacific region, that recruitment was opened to Chinese Canadians. Charlie was among the first batch of recruits and received his wings in September 1943 from No. 7 Service Flying Training School at RCAF Station McLeod in Alberta.

According to Charlie's youngest brother, Jim, who still lives in the Lethbridge area, like in most families there were tears at first, but they were proud that Charlie was going to fight for his country.

Charlie was asked by a Lethbridge Herald reporter why he, (keep in mind he was Canadian born), didn't choose to enlist in the Chinese Air Force instead. He replied, "Why? We are all one in this fight now".

Chow-Leong took part in the Burma campaign and was then was stationed to India, patrolling the Indian Ocean. After his death, an Air Force spokesman told the Free Press that he “…specialized in paratrooping, supply dropping and glider towing.”

In all, about 600 Chinese Canadians fought in World War II. It was thanks in large part to their efforts that the Exclusion Act was finally repealed in 1947.

The repeal was phased in. It started in May 1947 by allowing the wives and children of those who already lived in Canada to come. By February 1948, however, not one new immigrant came.

A spokesman for the Chinese consulate in Ottawa explained to a reporter that because the last Chinese immigrant was allowed to enter the country 25 years earlier,  "... there were practically no wives or children to bring".

In fact, most Chinese living in the country at the time were Canadian-born.

After the war, Charlie went to China and flew for the commercial airline Central Air Transport Company for about five years. In 1951, he returned to Alberta.

By this time, the Chow family, (who had since dropped the Leong portion of the name), sold the farm and moved to 705 4th St. S. in Lethbridge. 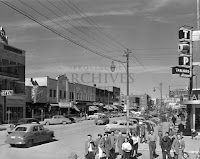 Charlie brought with him his Chinese wife, Marge. They moved into the family home, with seven others, and he resumed work as a cashier at the Ritz Cafe. The couple soon a daughter.

By this time, Charlie was 29 with about 6,000 hours of flying experience under his belt. He surely must have felt that he could do more than work at a cafe.

The RCAF was in the midst of a major restructuring and consolidation of its bases. No. 2 Flight Training School was relocated to Winnipeg and was on its way to becoming the country's largest military flight training centre for NATO forces.

Charlie decided to rejoin the RCAF and was posted to No. 2 Flight Training School. It was while on flight with two British trainees that he lost his life. You can read more about the accident here. 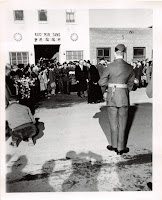 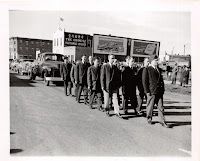 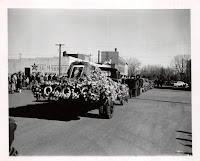 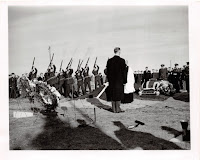 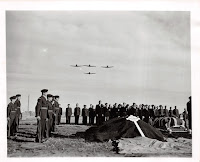 Charlie's remains were returned to Lethbridge and his funeral took place on the afternoon of Monday, February 11, 1952.

His body laid in state at the Chinese National League Hall before the cortege, led by 50 RCAF personnel members from Clareholm, Alberta and Winnipeg, wound through the town, past the family home to St. Augustine's Church and then to Mountain View Cemetery. The Lethbridge Herald reported that hundreds of residents lined the route to pay their respects.

At the cemetery there was a gun salute and RCAF flypast as his coffin was lowered.

I live in Lethbridge, and I didn't know about Charlie Chow's story or his connection to Manitoba.

The National League building referenced in your post, that was demolished in November 2011 unfortunately. There are a few buildings left of Chinatown in Lethbridge across the street, but that's it. Its almost a forgotten history of the Chinese Canadians that had to live in segregated areas in many cities in western Canada. Thanks for sharing this!