Heritage Winnipeg's Annual Heritage Preservation Awards will be taking place at the Millennium Centre on Monday, February 20th at 2 pm.

The awards are a great way to not only check out a great, old building but to also hear about some of the successful heritage preservation projects that have been going on in the city.

Often times, it is only the controversial projects that get a lot of media attention - ones that involve conflict between the city and owners, etc. Meanwhile, each year dozens of projects quietly and successfully happen thanks to the dedication of the owners and the craftsmen and women who preserve them. 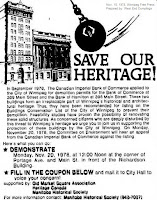 This a great chance to also check out the Millennium Centre / former Bank of Commerce Building.

If you haven't been inside, you need to check it out ! It is the building that kicked off the city's heritage movement back in 1978.

Check back later in the day and I will post the recipients !